[Herpetology • 2016] Vipera walser • A New Vertebrate for Europe: The Discovery of A Range-restricted Relict Viper in the western Italian Alps


Abstract
We describe Vipera walser, a new viper species from the north-western Italian Alps. Despite an overall morphological resemblance with Vipera berus, the new species is remarkably distinct genetically from both V. berus and other vipers occurring in western Europe and shows closer affinities to species occurring only in the Caucasus. Morphologically, the new species appear to be more similar to V. berus than to its closest relatives occurring in the Caucasus, but can be readily distinguished in most cases by a combination of meristic features as confirmed by discriminant analysis. The extant population shows a very low genetic variability measured with mitochondrial markers, suggesting that the taxon has suffered a serious population reduction/bottleneck in the past. The species is extremely range-restricted (less than 500 km2) and occurs only in two disjunct sites within the high rainfall valleys of the Alps north of Biella. This new species should be classified as globally ‘endangered’ due to its small and fragmented range, and an inferred population decline. The main near-future threats to the species are habitat changes associated with reduced grazing, along with persecution and collecting.

Type locality: San Giovanni d'Andorno, strada per Oropa at 1300 m a.s.l. in the Alps north of town of Biella, a subrange of the Pennine Alps, north-western Italy.

Differential diagnosis: Vipera walser sp. nov. is generally similar to the species of the subgenus Pelias and can be confused with V. berus, which co-occurs on the Alps in allopatry (Fig. 6, Table 2). The species differs in a generalized higher count of cephalic scales, in particular the ones listed below (V. berus in parentheses): higher number of crown scales: 7–30, mean 17.4 (versus 4–22, mean 13.0); loreals: 4–15, mean 9.36 (versus 2–12, mean 6.72); and, to a lesser extent, perioculars: 16–23, mean 19.8 (versus 13–23, mean 18.4) (see Table 2). V. walser, in contrast to V. berus, also shows a marked tendency towards fragmentation of the cephalic large shields: the parietal scales are often completely broken down into several smaller scales: 2–14, mean 6.3 (versus 2–10, mean 2.4; see also Fig. 7). Less commonly, also the frontal scale is fragmented into smaller scales. Some individuals exhibit a dorsum of the head covered in small, irregular scales, like in V. aspis. V. walser has between 1.5 and 2 rows of subocular scales on both sides of the head in 85% of the analysed specimens (V. berus has typically one row of suboculars, with the exception of some populations in the southern Alps). The dorsal zigzag is often broken down into separate bars as in Vipera aspis (Linnaeus, 1758) or Vipera berus bosniensis (see Fig. 6). Despite the lack of a strictly diagnostic morphological character, V. walser can be readily distinguished from populations of V. berus from Central and northern Europe by a combination of several characters (e.g. the number of subocular scales, fragmentation of parietals and number of apicals). Identification based solely on observation of external morphology is less obvious if individuals of V. berus from southern Alps are considered. Despite this, discriminant analysis correctly identified individuals to species in 94% of females and 88% of males, based on a set of analysed characters (see Figs 2 and 3). The mean p-distance, based on a combined dataset of about 3000 base pairs of mitochondrial genes, between V. berus and V. walser is 5.36%. Based on our current knowledge of its distribution, Vipera walser is restricted to the Alps north of town of Biella, a subrange of the Pennine Alps, west of the river Ticino, north-western Italy (Fig. 8).

Etymology: Vipera walser sp. nov. is named after, and dedicated to, the Walser people with whom it shares an extraordinary beautiful and wild area of the south-western Alps.

Conclusion
The present study described and named a new viper species, V. walser, which shows strong genetic divergence and clear morphological differentiation from all other known European viper species. The new taxon occurs in a restricted area of the south-western Italian Alps and shows close affinities with the Caucasian species V. dinniki, V. darevskii and V. kaznakovi, opening unexpected and interesting biogeographic scenarios. The very small extent of occurrence of the new species implies a particularly high threat level, and thus conservation managements should be developed. The protection of its habitat, the limitation of the forest regrowth, but also the evaluation of its likely future distribution given climatic changes (for the long term) or struggle against culling (short term) are key elements to investigate. Involvement of local authorities, foundations and other stakeholders will be crucial in realizing effective protection of this species. 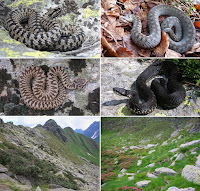