Remains of theropod dinosaurs are very rare in Northern Germany because the area was repeatedly submerged by a shallow epicontinental sea during the Mesozoic. Here, 80 Late Jurassic theropod teeth are described of which the majority were collected over decades from marine carbonates in nowadays abandoned and backfilled quarries of the 19th century. Eighteen different morphotypes (A—R) could be distinguished and 3D models based on micro-CT scans of the best examples of all morphotypes are included as supplements. The teeth were identified with the assistance of discriminant function analysis and cladistic analysis based on updated datamatrices. The results show that a large variety of theropod groups were present in the Late Jurassic of northern Germany. Identified specimens comprise basal Tyrannosauroidea, as well as Allosauroidea, Megalosauroidea cf. Marshosaurus, Megalosauridae cf. Torvosaurus and probably Ceratosauria. The formerly reported presence of Dromaeosauridae in the Late Jurassic of northern Germany could not be confirmed. Some teeth of this study resemble specimens described as pertaining to Carcharodontosauria (morphotype A) and Abelisauridae (morphotype K). This interpretation is however, not supported by discriminant function analysis and cladistic analysis. Two smaller morphotypes (N and Q) differ only in some probably size-related characteristics from larger morphotypes (B and C) and could well represent juveniles of adult specimens. The similarity of the northern German theropods with groups from contemporaneous localities suggests faunal exchange via land-connections in the Late Jurassic between Germany, Portugal and North America. 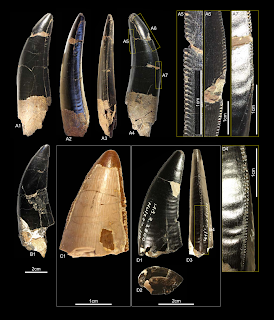 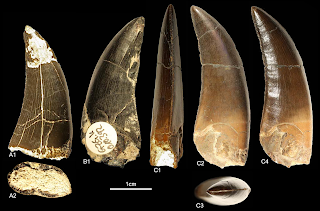 Conclusions
This study reveals ecologic sympatry of several major clades of Theropoda in the Late Jurassic of Northern Germany. Basal Tyrannosauroidea, Allosauroidea, Megalosauridae and probably Ceratosauria can be established with a high probability. The presence of Dromaeosauridae could not be confirmed by DFA and cladistic analysis, pending more complete material of this clade. The smaller teeth of our study show no similarities with the only slightly younger theropod fauna of Southern Germany. Results of recent screen-washing activities at the Langenberg Quarry seem to confirm this interpretation. However, this may be due to sampling bias as the teeth of Sciurumimus, Compsognathus and Juravenator are small and could easily be overlooked when embedded in matrix. The theropod fauna from Northern Germany shares many similarities with specimens described from Portugal (morphotype B, E, F, G, K and N) and the North American Morrison Formation (morphotype J). This could imply that at least some faunal exchange via temporary land connections between these localities existed in the Late Jurassic.

In their recent paper Oliver Gerke and Oliver Wings describe a number of teeth of theropod dinosaurs from the late Jurassic.
The analysis of these rare finds reveal a surprising diversity in this part of Europe, some of them come from the same locality as Europasaurus. Beside the expected allosaur like teeth the collection includes Torvosaurus and Marshosaurus like forms, but also ceratosaur teeth (here represented with a Ceratosaurus-like theropod, which isn't really correct)
and one or two morphotypes associated with basal tyrannosaurs.
Here some art for the press release and are normally five single pictures they are just glued together here.