A new and distinctive species of lacertid genus Acanthodactylus Fitzinger, 1834 is described from 7 km east of Khamir Port, Hormozgan Province, southern Iran at an elevation of 30–40m above sea level (asl). Analyses of morphological characters and the comparison with other formerly known species of this genus have proven the status of this taxon as a new, distinct species. Combinations of scalation characters and distinct morphology, coloration and habitat peculiarities in calcareous mountains distinguish Acanthodactylus khamirensis sp. nov. from all remaining species of the genus in the area. In order to show the validity of the new species, we carried out a comparative statistical analysis using 13 metric and six meristic morphological characters on all of the neighboring congeners of the new species using descriptive (one-way ANOVA) as well as multivariate analyses (PCA and DFA). The results confirm the specific status of the new taxon. Detailed information and an updated identification key for the genus Acanthodactylus in Iran are presented. 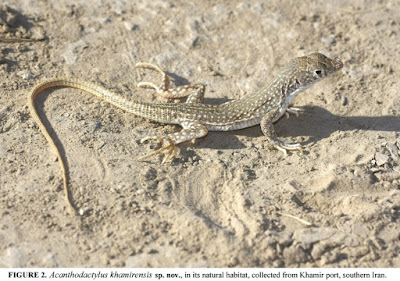 Diagnosis. The new species differs from all other Acanthodactylus species in having a combination of the following characters: a relatively medium sized lacertid (Fig. 2), with SVL: 48.43mm, TL: 91.89mm. Dorsal scales nearly smooth and imbricate; three supraoculars, the first one smaller than two entire middle ones (Fig. 3 A–B). Subocular bordering the mouth not separated from the lip border (Fig. 3–C). Dorsal scales the same size as laterals; ventral scales relatively imbricate, in 11 longitudinal rows and 34 ventral series in a longitudinal row along the belly between collar and preanal scale; dorsal scales 64 across middle of back; four supralabials anterior to subocular and three posterior to subocular; six infralabials; three series of scales around fingers, but two visible laterally; 22 rows of lamella under the 4th toe; 15 rows of lamella under the 4th finger; 24 femoral pores on each side, extended laterally to reach the knees; the two rows are separated by a space as large as diameter of each pore.

Habitat. The Khamir port is among the driest areas in southern Iran, with relatively high humidity (75%) and annual rainfall averaging about 120 mm, air temperature varies from 1°C during winter to 50°C during summer. Acanthodactylus khamirensis sp. nov. is found on calcareous mountains at the foothills of mountains around deep valleys, which undergo strong erosion. The habitat is without any vegetation except isolated shrubs with fleshy and needle-like leaves belonging to the family Zygophyllaceae (Peganum sp.) as the only vegetation cover in the area. The lizard can easily take refuge inside these dense bushes. Acanthodactylus khamirensis sp. nov. is approximately distributed in a mountainous habitat on bases with hardened substrate (Fig. 5). The specimens of A. khamirensis were collected during daytime, while running on the ground in relatively cool and fresh air during early morning and late sunset. In spite of frequent visits to the area, no other reptile species was collected or observed as sympatric and/or syntopic with A. khamirensis.

Etymology. The species is named after the place and locality where the species has been collected (Khamir Port, Hormozgan Province, Southern Iran) and the Latin ‘-ensis,’ meaning ‘from’ or ‘belonging to’. 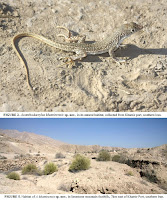