[Entomology • 2020] Contributions to the Taxonomy and Biogeography of Nemeritis Holmgren (Hymenoptera: Ichneumonidae: Campopleginae) 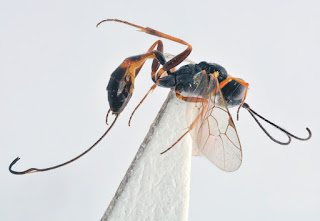 Abstract
Incurvaria pirinella Junnilainen, Kaitila & Mutanen, sp. nov. is described from Bulgaria based on specimens collected by netting and artificial light from several low-elevation localities in Bulgaria. The species is morphologically and genetically most similar to I. triglavensis Hauder, 1912. Differences between these two species are present in external appearance and genitalia of both sexes. Additionally, I. pirinella shows a distance of 4.74% to its nearest neighbour I. triglavensis in the standard DNA barcoding marker (COI-5P). We provide preliminary observations of phylogenetic affinities of European Incurvaria and briefly discuss habitat preferences of some species. All species have distinct barcodes with minimum K2P divergences between species averaging 7.05% (range 1.2–12.8%). A world checklist of Incurvaria Haworth, 1828 is provided and DNA barcodes for all European species are here released. Finally, we document morphological variation in male genitalia within I. triglavensis Hauder, 1912.

Although I. triglavensis is rather variable externally, it is always easy to separate from I. pirinella based on its relatively narrow forewing shape, paler ground colour and differences in forewing markings (Figs 6–11); see details in Suppl. material 2.

Incurvaria pirinella is easy to separate externally from Scandinavian I. vetulella (Figs 12–13) by a white narrow dorsal spot situated 2/5 from base and extending more than halfway across the forewing in I. pirinella. North European I. vetulella also typically have a distinctly broader dorsal spot, sparser forewing scaling and usually a pale medial area in the fringe, which is always absent in I. pirinella.
...

Distribution: Known from four different localities in the south-west corner of Bulgaria around the Struma river valley and its adjacent regions, which all belong to the Blagoevgrad district and the Pirin mountain range. The elevational range is wide: 200–1200 m, at least. 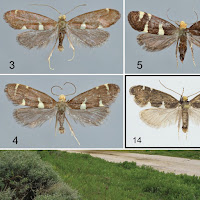 [Arachnida • 2020] A Survey of Phrurolithidae (Araneae) in southern Caucasus, Iran and Central Asia

Abstract
The spider family Phrurolithidae is revised in Azerbaijan, Iran and Tajikistan. The new genus Bosselaerius gen. n. is described to encompass three species: B. hyrcanicus sp. n. (type species, ♂ ♀, Azerbaijan, Iran), B. tajikistanicus sp. n. (♀, Tajikistan) and B. daoxianensis (Yin, Peng, Gong & Kim, 1997) comb. n. (♂, China). Furthermore, a new species of Phrurolithus C.L. Koch, 1839, namely P. azarkinae sp. n. (♂ ♀, Azerbaijan, Iran) is described, a redescription is provided for the poorly-known P. luppovae Spassky, 1941 (♂, Tajikistan), with its female being described for the first time, and P. pullatus Kulczyński, 1897 is recorded in Iran for the first time, representing the easternmost recorded locality for this species. Finally, 27 species of Chinese Phrurolithidae currently classified in Phrurolithus are transferred to Otacilia Thorell, 1897 on the basis of somatic characters and the morphology of the copulatory organs. Distributions of all treated species are mapped. 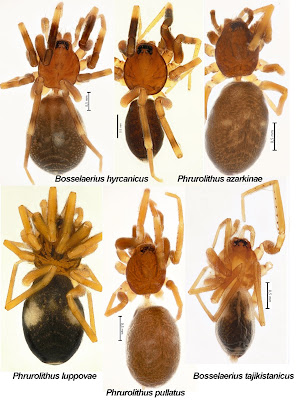 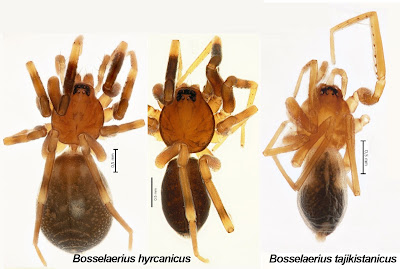 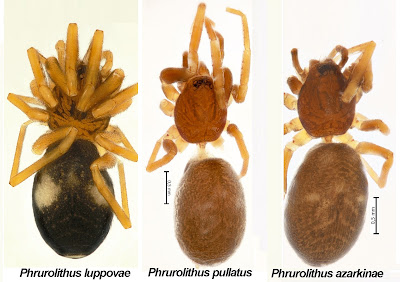 Abstract
We describe a new species of shieldtail (uropeltid) snake, Uropeltis rajendrani sp. nov., from the Kolli Hill complex of the southern Eastern Ghats in Tamil Nadu, India.  The new species belongs to the U. ceylanica group and is differentiated from related species in having 16–17:16–17:15–16 dorsal scale rows; 145–158 ventral scales; 8–11 pairs of subcaudals; dorsum uniform brown, anteriorly powdered with yellow mottling; venter brown, scales outlined with yellow.  This endemic species with a restricted range is known only from atop Kolli Hill complex, inhabiting higher elevation (> 900m) evergreen forests, where it is the only known member of this genus. 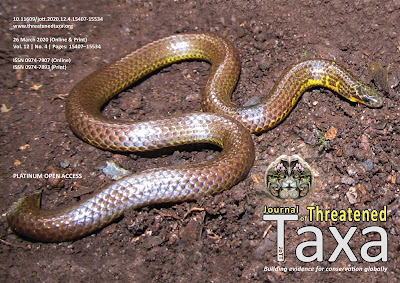 Etymology: Named in honour of Dr. Maria Viswasam Rajendran (2 Nov 1916–6 Aug 1993), ‘MVR’ for short, for his exhaustive studies on shieldtail snakes in Tamil Nadu, next only to Richard Henry Beddome and Frank Wall. Not only was he a professor of zoology at the St. Joseph’s College Palayamkottai (Tirunelveli, Tamil Nadu) but also the director of the Madras (now Chennai) Snake Park (Chennai, Tamil Nadu) during the early 1980s. 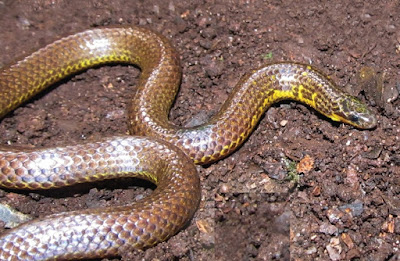 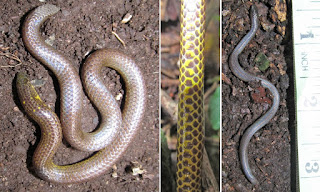 Abstract
Victrix svetlanae sp. n. is described from Russian Far East, Khabarovsk Krai. The new species belongs to the subgenus Poliobrya Hampson, 1908. New species is most similar to V. umovii (Eversmann, 1846) and V. patula (Püngeler, 1907) but differs in both external and genital characteristics. This is the first record of the genus Victrix in the Far East.

Etymology. The new species is dedicated to the memory of Svetlana Vladimirovna Koshkina (1963–2014), mother of the first author.

Abstract
The combination of genetic and phenotypic characters for species delimitation has allowed the discovery of many undescribed species of Neotropical amphibians. In this study, we used DNA sequences (genes 12S, 16S, ND1 and COI) and morphologic, bioacoustic and environmental characters of the Boana semilineata group to evaluate their phylogenetic relationships and assess their species limits. In addition, we included DNA sequences of several species of Boana to explore cryptic diversity in other groups. We found three Confirmed Candidate Species (CCS) within the B. semilineata group. Holotype examination of Hyla appendiculata shows that it is a valid species that corresponds to one of the CCS, which is here transferred to Boana. We describe the two remaining CCS. Our phylogeny highlights a number of secondary but meaningful observations that deserve further investigation: (1) populations of B. pellucens from northern Ecuador are more closely related to B. rufitela from Panama than to other Ecuadorian populations of B. pellucens; (2) we report, for the first time, the phylogenetic relationships of B. rubracyla showing that it is closely related to B. rufitela and B. pellucens; and (3) B. cinerascens and B. punctata form two species complexes consisting of several unnamed highly divergent lineages. Each of these lineages likely represents an undescribed species. 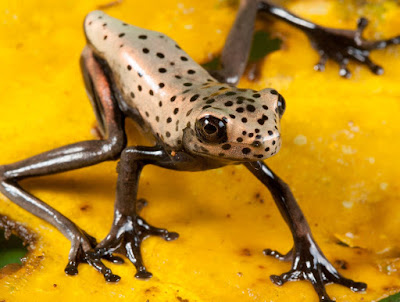 Distribution: Boana appendiculata occurs in the Amazon basin of Ecuador, Brazil and Colombia (Fig. 6). Localities with known elevation range from 14 to 1050 m above sea level.

Etymology: The specific epithet nigra is a Latin adjective in the nominative case meaning black, and refers to the black coloration on the flanks of these frogs.

Distribution: Boana nigra occurs on the eastern Andean slopes of Ecuador. Localities with known elevation range from 910 to 1847 m a.s.l.

Etymology: The specific name is derived from the Latin words ventriculus = belly, and macula = spot or stain, in reference to the brown blotches on the chest and belly of these frogs.

Distribution: Boana ventrimaculata inhabits the Amazon basin of Ecuador and Brazil (Fig. 6). Localities with known elevation range vary between 64 and 1035 m of elevation. 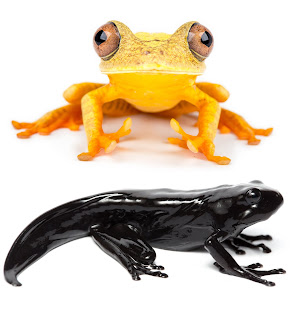 Abstract
A new species within the genus Lasiurus is proposed from 3 specimens collected in the coastal desert and western slopes of southwestern Peru. Based on molecular and morphological evidence, the new species is related to Lasiurus reddish species (i.e., L. atratus, L. castaneus, L. blossevillii, and L. varius). Cytochrome b genetic divergence between the new species and the other species of the genus was high (> 9.4%). This new species, endemic to Peru, increases the known diversity of Lasiurus to 20 species.

Etymology: the specific epithet "arequipae" is given in honor of the White City of Arequipa, located in the southwest of Peru, whose historical center was recognized as World Heritage by the United Nations Educational, Scientific and Cultural Organization (UNESCO) in November 2000. It should be noted that in the department of Arequipa find the deepest canyons in the world, canyons Cotahuasi and Colca, which define the ranges of distribution of various species of flora and fauna in the western slope of the Andes (Pearson, 1982). 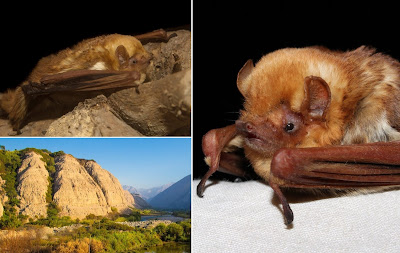 
Abstract
The genus Didymocorypha Wood-Mason, 1877 (Eremiaphilidae, Iridinae) has only been recorded in South Asia, including a sole species D. lanceolata (Fabricius). Here, we firstly extend its distribution to China, with description of one new species D. libaii sp. nov. Didymocorypha libaii sp. nov. lives in an area about 3000 meters above sea level on the southern slope of the Himalayas (Tibet in China), one of the highest-altitude inhabited areas of mantis in the Northern Hemisphere. It is also the first recorded Oriental mantis species in which both sexes are wingless. Life history of the new species, necessary illustrations and ecological images are provided. The distribution of the new Didymocorypha species is discussed and mapped.

Etymology: The new species was named after Bai Li, who is a poet in the Tang dynasty of China and one of the most famous poets in Chinese history. 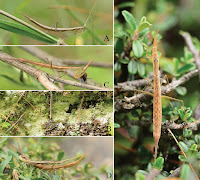 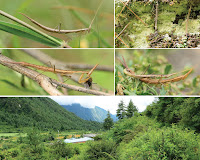 [Mammalogy • 2020] Philippine Bats of the Genus Kerivoula (Chiroptera: Vespertilionidae): Overview and Assessment of Variation in K. pellucida and K. whiteheadi

Abstract
Bats of the genus Kerivoula (Mammalia, Chiroptera) are widespread in the Philippines with four reported species, but have been poorly known due to a paucity of specimens. We provide the first molecular phylogeny for Philippine Kerivoula, which supports the existence of four distinct clades that we treat as species (K. hardwickii, K. papillosa, K. pellucida, and K. whiteheadi); these four overlap broadly geographically. Each of these may be recognized on the basis of cytochrome b sequences and external and craniodental morphology. Detailed examination of K. pellucida shows little geographic differentiation within the Philippines, but they differ subtly from those on the Sunda Shelf. We consider K. whiteheadi to be composed of four recognizable clades, each restricted to a geographic region within the Philippines. We consider K. bicolor, from peninsular Thailand, and K. pusilla, from Borneo, to be distinct from K. whiteheadi. Our data indicate the presence of two species within the Philippines currently lumped as K. hardwickii; further study of these is needed. A calibrated phylogeny suggests that Kerivoula began arriving in the Philippines about 10 MYA, with each of the four current lineages arriving independently. 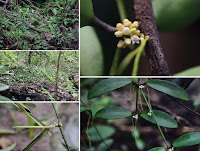 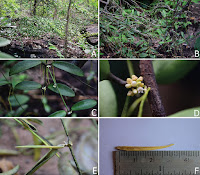