[Herpetology • 2020] A Taxonomic Revision of the South-eastern Dragon Lizards of the Smaug warreni (Boulenger) Species Complex (Squamata: Cordylidae) in southern Africa, with the Description of A New Species, Smaug swazicus


Abstract
A recent multilocus molecular phylogeny of the large dragon lizards of the genus Smaug Stanley et al. (2011) recovered a south-eastern clade of two relatively lightly-armoured, geographically-proximate species (Smaug warreni (Boulenger, 1908) and S. barbertonensis (Van Dam, 1921)). Unexpectedly, S. barbertonensis was found to be paraphyletic, with individuals sampled from northern Eswatini (formerly Swaziland) being more closely related to S. warreni than to S. barbertonensis from the type locality of Barberton in Mpumalanga Province, South Africa. Examination of voucher specimens used for the molecular analysis, as well as most other available museum material of the three lineages, indicated that the ‘Eswatini’ lineage—including populations in a small area on the northern Eswatini–Mpumalanga border, and northern KwaZulu–Natal Province in South Africa—was readily distinguishable from S. barbertonensis sensu stricto (and S. warreni) by its unique dorsal, lateral and ventral colour patterns. In order to further assess the taxonomic status of the three populations, a detailed morphological analysis was conducted. Multivariate analyses of scale counts and body dimensions indicated that the ‘Eswatini’ lineage and S. warreni were most similar. In particular, S. barbertonensis differed from the other two lineages by its generally lower numbers of transverse rows of dorsal scales, and a relatively wider head. High resolution Computed Tomography also revealed differences in cranial osteology between specimens from the three lineages. The ‘Eswatini’ lineage is described here as a new species, Smaug swazicus sp. nov., representing the ninth known species of dragon lizard. The new species appears to be near-endemic to Eswatini, with about 90% of its range located there. Our study indicates that S. barbertonensis sensu stricto is therefore a South African endemic restricted to an altitudinal band of about 300 m in the Barberton–Nelspruit–Khandizwe area of eastern Mpumalanga Province, while S. warreni is endemic to the narrow Lebombo Mountain range of South Africa, Eswatini and Mozambique. We present a detailed distribution map for the three species, and a revised diagnostic key to the genus Smaug. 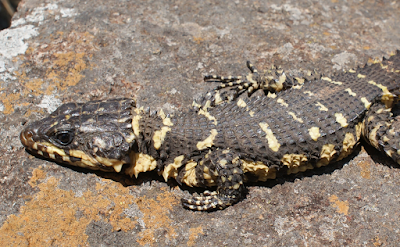 Diagnosis. (includes ‘additional material’) Distinguished from all other cordylids (Cordylidae) by its unique combination of dorsal, lateral and ventral colour patterns (see descriptions and figures). Referable to the genus Smaug on the basis of its large size and robust body, enlarged and spinose dorsal and caudal scales, enlarged occipital scales, and frontonasal in contact with the rostral, separating the nasal scales. 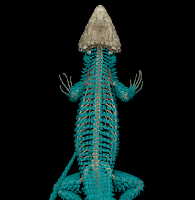 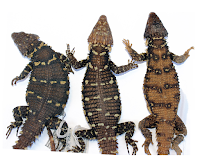 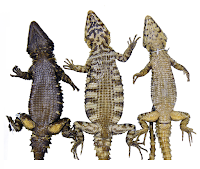 Etymology. Named for the Kingdom of Eswatini, the country where most of the species’ range is located. Both ‘eSwatini’ and ‘Swaziland’ derive from the word iSwazi, after the name of an early chief, Mswati II (c. 1820–1868).

Distribution. Highveld and Middleveld of Eswatini in Hhohho, Manzini and Shiselweni Regions, and adjacent areas in the South African provinces of (eastern) Mpumalanga (in Nkomazi municipality) and (northern) KwaZulu–Natal (in uPhongolo and Abaqulusi municipalies) (Fig. 9) at elevations of 462 to 1,139 m a.s.l. 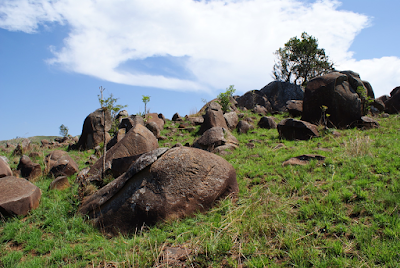 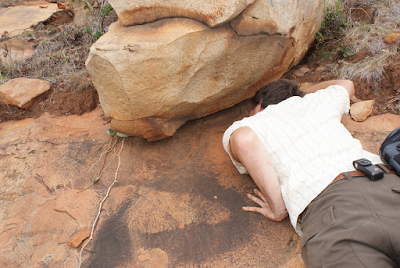 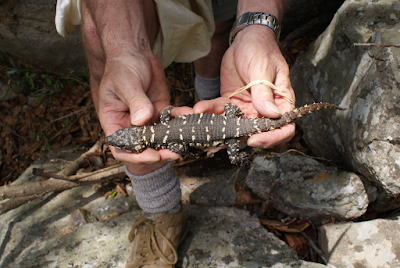 Natural history. Diurnal and rupicolous, living in deep, horizontal (or gently sloping) crevices in granitic rock along hillsides, usually in the partial shade of trees (Fig. 8A; see also Jacobsen, 1989). According to R.C. Boycott (in litt., 2019), rocky terrain in closed canopy bushveld is the preferred habitat in Eswatini. A specimen in Ithala Game Reserve in KwaZulu–Natal was photographed on a tree trunk (ReptileMAP, VM no. 152451). When grasped by the hind limb, an individual from the type series performed an unusual anti-predator behaviour by repeatedly flexing and extending the inhibited limb caudally, so as to pull the captors’ digits directly onto the very sharp whorl of spines at the base of the tail (E.L. Stanley, 2008, personal observation). 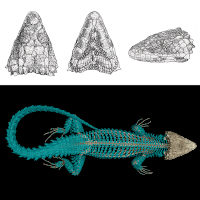 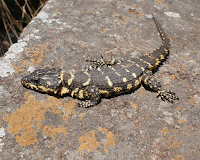 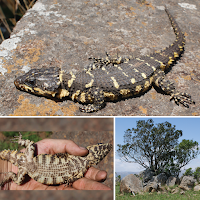 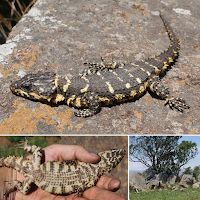