﻿Abstract
The Khok Pha Suam locality in the province of Ubon Ratchathani, northeastern, Thailand, is known as “the last home of Thai dinosaurs”, because it belongs to the Lower Cretaceous Khok Kruat Formation (Aptian-Albian) which is currently the youngest Mesozoic vertebrate fossil producing formation in the Khorat Group. Here, we describe a diverse vertebrate assemblage, including hybodonts, ray-finned fishes, turtles, crocodyliforms, pterosaurs, and dinosaurs from the Khok Pha Suam locality. The updated data on the Khok Kruat fauna provides a better understanding of the variety and distribution of Early Cretaceous continental ecosystems, which are useful for palaeoenvironmental reconstruction. In addition to consolidating unincorporated data on fauna, this study also provides the palaeontological data necessary to illustrate the palaeoecosystem to the general public, as well as improving the academic value of the Pha Chan-Sam Phan Bok Geopark.
Key Words: Aptian-Albian, Khorat Group, Lower Cretaceous, Pha Chan-Sam Phan Bok Geopark, Vertebrates 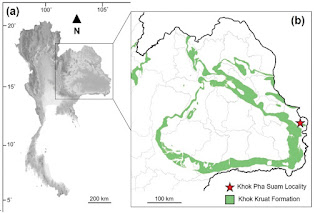 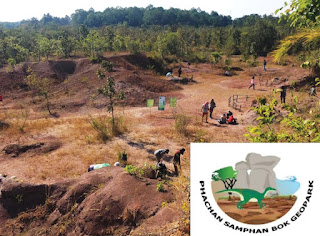 ABSTRACT
Mimosa baptistae is a new species presenting stalked glandular trichomes that give it a glutinous appearance, mainly with respect to the leaflets. Furthermore, it is an aculeate species, with multijugate leaves, white stamens, and fruits also covered by glandular trichomes. A herbaria survey and fieldwork only recorded this species as occurring on sandstone outcrops of the city Caçapava do Sul, Brazil. The species may be confused with other species of Mimosa sect. Batocaulon ser. Stipellares such as M. bifurca, M. sobralii and M. lepidota. However, features such as absence/presence of aculei, stamens color, habitat, and flower features are useful for distinguishing them from the new species. Here, we provide notes on morphology, geographic distribution, as well as anatomical detail of its glandular trichomes and content. Finally, we discussed the taxonomic significance of the micromorphology of glandular trichomes and their content in Mimosa ser. Stipellares as well as the potential applicability of such features to better understand the morphology of this series.
Keywords: glands; leaflets; Pampa; secretory structures; Serra do Sudeste
Mimosa baptistae Schmidt-Silveira & Miotto sp. nov .
Distribution and ecology: Mimosa baptistae may be considered an endemic species up to now for Caçapava do Sul at the hills of Pedra do Segredo, Pedra do Leão and their neighborhood, in Serra do Sudeste (Rio Grande do Sul State), where it grows on sandstone outcrops, shrublands (vassoural), and rocky grasslands, at approximately 200 to 500 m elevation. Caçapava do Sul belongs to the physiographic region of Serra do Sudeste (Fortes 1959), which is highlighted as a high-level priority area for conservation (CNCFlora 2014) in the Pampa biome. Furthermore, Pedra do Segredo and Pedra do Leão harbor other species endemic and rare such as Pavonia secreta Grings & Krapov, Petunia secreta Stehmann & Semir, Petunia exserta Stehmann, and Croton pygmaeus L.R. Lima (Grings et al. 2011).
Etymology: The specific epithet is in honor of Dr. Luís Rios de Moura Baptista, who studied many groups of plants from the Flora of Rio Grande do Sul, including the Mimosa genus. 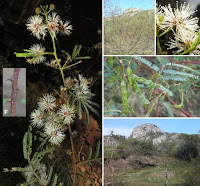 Abstract
Based on phylogenetic and morphological evidence, we describe a new species of Cyrtodactylus from Obi Island in the northern Moluccas, Indonesia. The new species is genetically and morphologically allied to the Melanesian species Cyrtodactylus papuensis but is distinguished by its larger body size, fewer midbody scale rows, deep precloacal groove in males, and enlarged nonpored femoral scales and pored precloacal scales arranged in a continuous series. The new species is also genetically divergent from C. papuensis (p-distances of 19.0%–20.1% in the mitochondrial NADH dehydrogenase subunit 2 gene). Four species of Cyrtodactylus are now known from the northern Moluccas, but it is likely additional species remain unrecognized.
Cyrtodactylus papeda sp. nov.
Etymology.— The specific epithet is an invariable noun in apposition and refers to papeda (in Indonesian language), a traditional fiber-rich, cholesterol-low food in Moluccas and West Papua made from sago (Metroxylon sagu, family Arecaceae) starch. Here, we used this epithet to honor (promote) a traditional culinary feature of Obi Island and to showcase this new endemic gecko species to the public. Papeda is white in color, with the texture resembling sticky glue, and the cuisine is usually served with tuna fish and flavored with saffron. Suggested vernacular names are ‘‘cecak jarilengkung Obi’’ and Obi Bent-toad Gecko, in Bahasa Indonesia and English, respectively.
Awal Riyanto; Fata H. Faz; A.A. Thasun Amarasinghe; Misbahul Munir; Yuli S. Fitriana; Amir Hamidy; Mirza D. Kusrini and Paul M. Oliver. 2022. A New Bent-Toed Gecko of the Cyrtodactylus marmoratus Group (Reptilia: Gekkonidae) from Obi Island, Indonesia. Herpetologica.
DOI: 10.1655/Herpetologica-D-21-00028
facebook.com/thasun/posts/10160259261819407

Abstract
The St Bathans Fauna is a highly diverse non-marine vertebrate assemblage derived from the lower Miocene (19–16 Ma) Bannockburn Formation exposed in Central Otago, New Zealand. Deposited in palaeolake Manuherikia, remains of waterfowl dominate the avian assemblage, which, with eight known species in four genera, is one of the more diverse globally. Here we describe Manuherikia primadividua nov. sp., the fourth species in the genus. The stratigraphic distribution of fossils assignable to M. primadividua nov. sp. and a previously known species of Manuherikia, M. lacustrina, allow for the recognition of two distinct biozones within the Bannockburn Formation. Fossils of Manuherikia lacustrina are shown to be restricted to beds in the lower 26 m of the Bannockburn Formation in the Manuherikia River Section while fossils of the new species only occur in beds higher than 34 m in this section. This zonation allows correlation of the disparate sites in nearby Mata Creek with the stratigraphy in the Manuherikia River Section. This is the first such biostratigraphical zonation recognised in the fossil-bearing horizons at St Bathans; all other vertebrates have distributions spanning the stratigraphical range of both species. We tentatively correlate this vertebrate zonation with the previously identified pollen zonation, namely the Casuarinaceae Zone and its overlying Asteraceae-Chenopodiaceae or Chenopodipollis chenopodiaceoides Zone. This transition marks a relatively minor environmental change towards drier and more seasonal climates that appears to have driven the palaeoecological replacement of M. lacustrina by M. primadividua nov. sp. in palaeolake Manuherikia.
Keywords: Early Miocene, Fossil birds, New Zealand, St Bathans Fauna, Biostratigraphical zonation 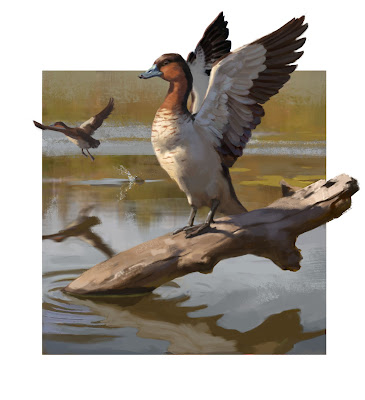 Abstract
Three new species of Cnemaspis are described from karst regions of Sarawak, Malaysia, on the island of Borneo. These are Cnemaspis matahari sp. nov. and C. sirehensis sp. nov. from limestone hills located in the Serian Division of western Sarawak, and C. lagang sp. nov. from Gunung Mulu, Miri Division, in northern Sarawak. All can be distinguished from congeners using mitochondrial DNA as well as an enlarged metatarsal scales on the first toe. Individually, each species can be diagnosed by differences in subcaudal scale morphology: Cnemaspis lagang sp. nov. lacks enlarged subcaudals; Cnemaspis matahari sp. nov. has keeled subcaudals bearing an enlarged median row of smooth scales; and Cnemaspis sirehensis sp. nov. has an enlarged median row of weakly keeled scales. The discovery of these species suggests that additional unrecognized species may exist within the genus on Borneo, especially in association with karst formations. High endemism and species diversity notwithstanding, these karst formations are under severe pressure from limestone extraction and deforestation.
Keywords: Reptilia, Cnemaspis, taxonomy, new species, ecology, conservation, endemic, karst, Sarawak 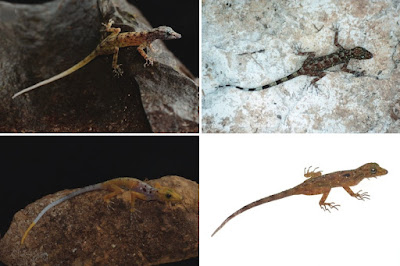 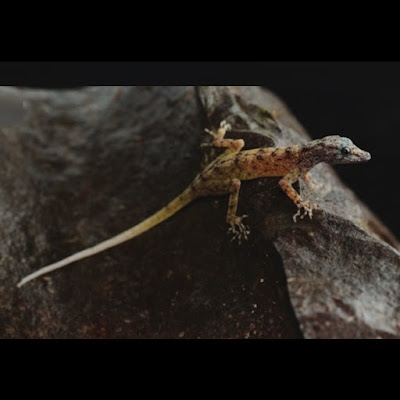 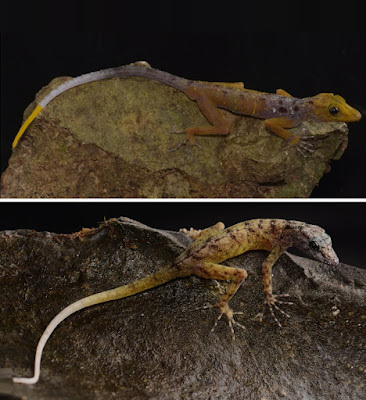 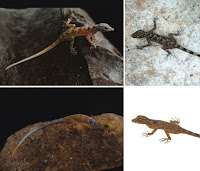 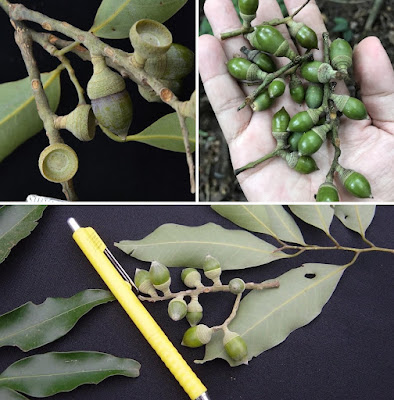 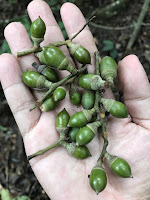 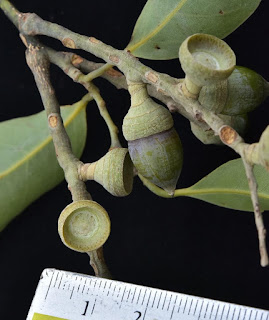 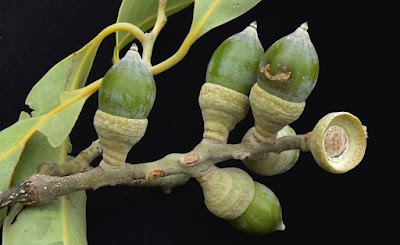 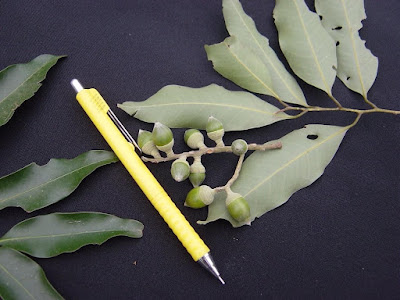 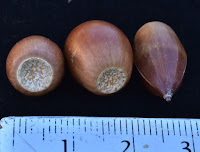 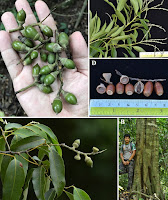 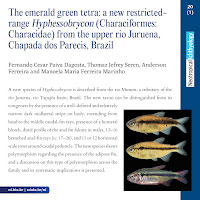 Abstract
Bronchocela hayeki (Müller, 1928) is one of the rarest species of the genus, known only from a handful of museum specimens from five locations in North Sumatra, and often confused with its similar congener, B. cristatella, which occurs widely throughout the Indonesian Archipelago and Peninsular Malaysia. Here, we examined the morphology of B. hayeki based on museum specimens, and redescribe the species based on a freshly collected series near the type locality, as the condition of its neotype is not in a good state. We studied the characters of B. hayeki with a morphometric comparison to its sympatric congener B. cristatella and allopatric congener, B. jubata from Sumatra Island, Indonesia. Based on the current distribution pattern and the apparent threats, we update the conservation status of B. hayeki using IUCN Red List Criteria and propose that it be considered as an Endangered (EN) species endemic of northern Sumatra including Aceh. We also provide a key to the recognized Bronchocela species, based on examined material and literature.
Keywords: Reptilia, Conservation, Endemic, Indonesia, morphometric characters, Sumatra 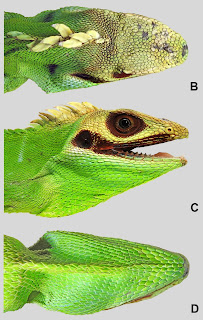 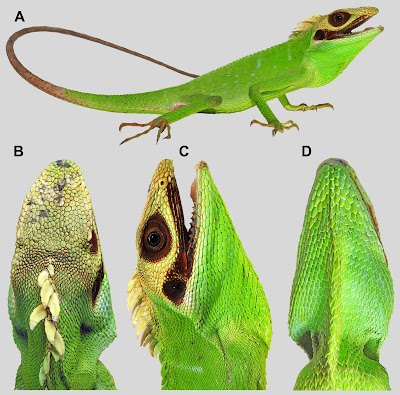