Highlights
• A robust phylogeny is resolved for 205 species of Papuan microhylid frogs.
• The problematic backbone is resolved revealing ancient adaptive radiation.
• Extensive cryptic diversity is discovered, putting all “widespread” species into doubt.
• Present-day communities are ecologically diverse with up to 5 lifestyles and 14 species.
• Communities are randomly assembled suggesting adaptive and non-adaptive radiation.
Abstract
The microhylid frogs of the New Guinea region are the largest and most ecologically diverse subfamily (Asterophryinae) of one of the largest anuran families in the world and can live in communities of up to 20 species. While there has been recent progress in resolving the phylogenetic relationships of Asterophryinae, significant uncertainties remain, impeding further progress in understanding the evolution of microhabitat use, parental care, and life history variation in this group. In particular, the early divergences at the base of the tree remain unclear; as does the monophyly of some genera; and recent studies have discovered that species with wide geographic distribution are instead cryptic species complexes. In this study, we fortified geographic sampling of the largest previous phylogenetic effort by sequencing an additional 62 taxa and increased data quality and quantity by adding new layers of data vetting and by filling in previously incomplete loci to the five gene dataset (2 mitochondrial, 3 nuclear protein-coding genes) to obtain a dataset that is now 99% complete in over 2400 characters for 233 samples (205 taxa) of Asterophryinae and 3 outgroup taxa, and analyzed microhabitat use data for these taxa from field data and data collected from the literature. Importantly, our sampling includes complete community complements at 19 sites as well as representatives at over 80 sites across New Guinea and its offshore islands. We present a highly resolved molecular phylogeny which, for the first time, has over 95% of nodes supported (84% highly supported) whether using Maximum Likelihood or Bayesian Inference, allowing clarification of all genera (whether monophyletic or clearly not), their sister genera relationships, as well as an age estimate for the Asterophryinae at approximately 20MYA. Early generic diversification occurring between 17 and 12 MYA gave rise to a surprising diversity of about 18 genera as well as the 5 putative microhabitat types. Our tree reveals extensive cryptic diversity calling any widespread taxa into doubt, and clearly demonstrates that complex multispecies communities of Asterophryinae are ecologically diverse, are numerous, and of ancient origin across New Guinea. We discuss the implications of our phylogeny for explaining the explosive diversification of Asterophryinae as the result of adaptive radiation, niche conservatism, and non-adaptive radiation.
Keywords: Community assembly, Phylogenetics, Diversification, Adaptive radiation, Anura, Microhylidae, Asterophryinae, Cryptic species 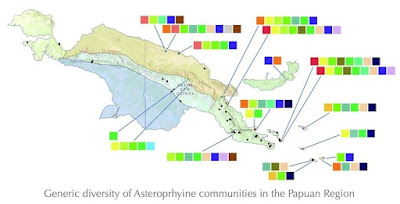 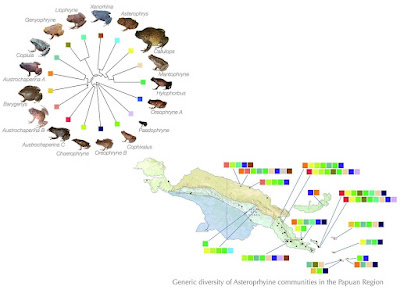 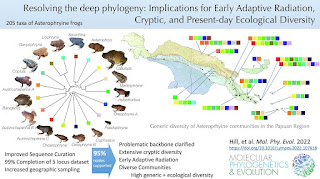 ﻿Abstract
A new species, Primula surculosa, is described and illustrated. In gross morphology, it is clearly allied to section Petiolares and is most similar to P. taliensis from the group Taliensis, but is distinctive in its indumentum in the throat of the corolla tube, and the markedly stoloniferous habit.
Keywords: morphological characteristics, new species, Primula taliensis, taxonomy, Yunnan

﻿ Primula surculosa Y.Xu & G.Hao, sp. nov.
Diagnosis: Primula surculosa is morphologically most similar to P. taliensis, but is distinctive in its indumentum in the throat of the corolla tube, and the markedly stoloniferous habit.
Etymology: The specific epithet “surculosa” refers to the remarkable root-suckers (stolons), with long slender internodes and reduced leaves arising after anthesis. 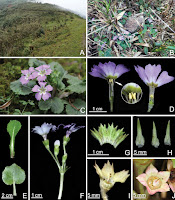 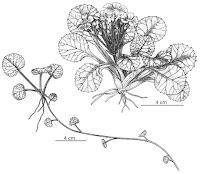 Abstract
A new species of Pleurothallis from the Western Andes of Colombia is described and illustrated. The new species belongs to subsection Acroniae of the series Amphigyae, morphologically resembles Pleurothallis amphigya, but differs mainly by the ovate-lanceolate lip, with two divergent, elongate keels, located at the base up to about the middle of the lip (vs. triangular trilobed, the disc with a developed glenion at the base).
Keywords: San José del salado, Taxonomy, Systematics, Pleurothallis, Western Andes, Amphigyae, Acroniae, Acronia, Monocots 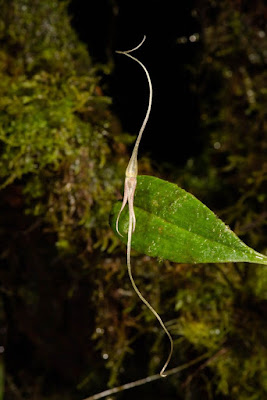 Pleurothallis mark-wilsonii J.S.Moreno, Gal-Tar & Sierra-Ariza, sp. nov.
Pleurothallis mark-wilsonii is most similar to P. amphigya Luer & Escobar (1981: 128) but could be distinguished its petals oblong-lanceolate, revolute and strongly acuminate (vs. elliptical-ovate or subsigmoid, oblique and slightly acuminate) and the lip ovate-lanceolate, with two diverging keels, elongated, located at the base to near the middle of the lip (vs. triangular trilobed, the disc with a developed glenion at the base).
Etymology:—Named after Mark Wilson from the Colorado College in USA. A friend and an arduous researcher of the genus Pleurothallis. His contributions have provided valuable information to solve several taxonomic difficulties within the genus (Figure 3)
Juan Sebastian Moreno, Mario Alexei Sierra-Ariza, David Hoyos, Robinson Galindo-Tarazona. 2022. Pleurothallis mark-wilsonii A New Species from the subsection Acroniae series Amphigyae from the Western Andes of Colombia. Phytotaxa. 568(3); 283-288. DOI: 10.11646/phytotaxa.568.3.5
Researchgate.net/publication/364350216_Pleurothallis_mark-wilsonii_a_new_species_from_the_Western_Andes_of_Colombia
twitter.com/ParquesColombia/status/1583227561420603395
เขียนโดย pskhun ที่ 1:00 PM

Abstract
Epitypes are proposed for two species of Hechtia: H. subalata and H. jaliscana, both endemic to Western Mexico. The holotypes of both species consist of fruiting specimens. While the female flowers of both species are extremely similar, the staminate ones are noticeable different: we select staminate vouchers as epitypes to clearly circumscribe both taxa. As a result of the delimitation of the concept Hechtia subalata and its geographical distribution, we identify a new species from Durango, Mexico, previously misidentified as Hechtia subalata: Hechtia marthae. We provide images portraying plant parts of all species, as well as photographs in habitat. Finally, assessments of the conservation status of the three species sensu IUCN criteria are included.
Keywords: Durango, epitype, Flora Novo-Galiciana, IUCN, Jalisco, Nayarit, Zacatecas., Monocots
Hechtia jaliscana L.B. Sm.,
Phytologia 10(6): 482, t. 1, f. 10. 1964.
Hechtia subalata L.B. Sm.,
Contribution Gray Herbarium 117: 15–16, t. 1, f. 29. 1937.
Hechtia marthae I. Ramírez, sp. nov.
Diagnosis:—Hechtia marthae is similar to H. subalata but differs in its pistillate branches much shorter than theprimary bracts (vs. conspicuously larger than the primary bract), with shorter branches (2–5 vs. (2–)5–15 cm long),floral bracts narrowly triangular, 2–5 × 1 mm (vs. broadly ovate, 3–4.5 × 3–4 mm), ovary 1/3 inferior (vs. completelysuperior), with longer petals (5–7 vs. 3–5 cm long).
Eponomy:— The species is named after Martha González-Elizondo in recognition for her outstanding contributionto the knowledge on the Flora of Durango and for collecting material of the species.
Ivón Ramírez-Morillo, Pablo Carrillo-Reyes, José Luis Tapia-Muñoz and Claudia J. Ramírez-Díaz. 2021. In Disentangling Two Species Limits of Hechtia (Bromeliaceae: Hechtioideae) from Sierra Madre Occidental, A New Species is discovered from Durango, Mexico. Phytotaxa. 523(1);55-72. DOI: 10.11646/phytotaxa.523.1.3
Researchgate.net/publication/355287028_In_disentangling_two_species_limits_of_Hechtia_from_Sierra_Madre_Occidental
twitter.com/SocBotMex/status/1452259920317923329
เขียนโดย pskhun ที่ 12:59 PM 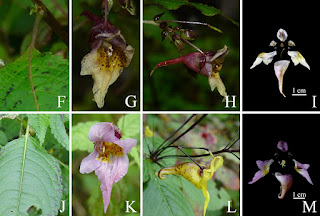 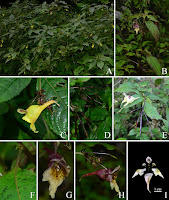 Globba depingiana Y.H. Tan & H.B. Ding (Zingiberaceae), a new species from southern Yunnan, China, is described and illustrated. Morphologically, it is similar to G. williamsiana in its pendent inflorescence with large persistent bracts but differs from it by its hairy lamina, shorter ligule and greenish yellow flowers with two dark yellow-green spots on the labellum. 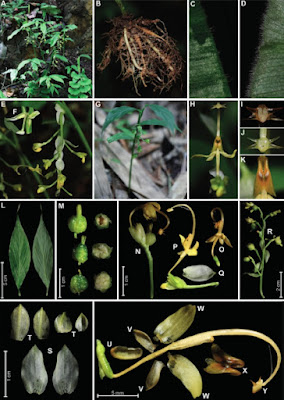 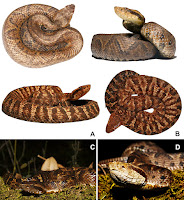 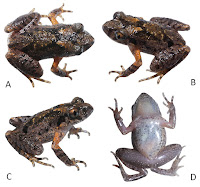 Summary
Blinkworthia was established as a tropical Asian genus in the morning glory family (Convolvulaceae) with a unique combination of habit, bract, corolla and fruit morphology. Recently, however, investigations of the morphology and anatomy have shown that none of these diagnostic characters can be used to delimit Blinkworthia as an independent genus. This study resolves the generic circumscription using phylogenetic analysis of molecular data from four loci: ITS, trnL-trnF, matK and rps16. The results showed that all members of Blinkworthia were nested within Argyreia, concordant with the current morphological concept of Argyreia. All information robustly supported that Blinkworthia should be subsumed under Argyreia prompting us to make the nomenclatural transfers from Blinkworthia to Argyreia and make the new combinations A. convolvuloides and A. lycioides. In addition, phenetic analyses revealed that a species endemic to Burma, A. campanuliflora, should be resurrected from the synonymy of B. convolvuloides. The three species are circumscribed, described, illustrated and their ecology, distribution and vernacular names are summarised, all documented with specimen citations. An identification key is provided for these three closely related species.
Key Words: Argyreia, classification, generic delimitation, new combination, South-East Asia, systematics
Pantamith Rattanakrajang, Pirada Sumanon, Paweena Traiperm, George Staples and Timothy Utteridge. 2022. Reduction of Blinkworthia (Convolvulaceae) based on Multilocus Phylogenetic Reconstruction and Resurrection of A Species from Synonymy revealed by Phenetic Analyses. Kew Bulletin. DOI: 10.1007/s12225-022-10052-1
Researchgate.net/publication/363885332_Reduction_of_Blinkworthia
ความสัมพันธ์ทางอนุกรมวิธานในพืชวงศ์ผักบุ้ง สกุลเครือพูเงิน และ สกุลระฆังช้างเผือก
facebook.com/paweenat/posts/pfbid0p5cBMqftFE95yoWEQkQBrnrE6GvFYunHiyapQ7KYdE6TYZkXzpBsJfR4idTanNv1l
plantscience.sc.mahidol.ac.th/?p=1994
Researchgate.net/publication/321933659_Re-evaluation_of_generic_characters_for_Blinkworthia
เขียนโดย pskhun ที่ 3:52 AM

Abstract
Taxonomic studies over the past decade of the endemic Night Frog genus Nyctibatrachus (originally described in 1882) from Peninsular India have more than tripled, from 11 at the turn of this century to 36 by 2017. Despite these revisionary contributions, it is still challenging for field biologists to identify night frog species reliably, due to a near-complete absence of diagnostic, discrete character states or trait values. Worse, many questionably diagnosed night frog species' status has ostensibly been “supported” by phylogenies derived from sparsely sampled gene-trees that are based on a single locus or a handful of markers—with topology and arbitrary genetic distance thresholds of 3–6% used to support new species descriptions. We sought to re-evaluate and validate the species boundaries of six currently nominated species of Nyctibatrachus of the aliciae group (N. aliciae, N. periyar, N. deveni, N. pillaii), N. vasanthi, and N. poocha clade using a comprehensive integrative taxonomic approach that integrates classical taxonomy, molecular species delimitation analysis, statistical analysis of morphological characters of adults and larvae, analyses of bioacoustics, and natural history information. Our results indicate that recent descriptions of Nyctibatrachus deveni, N. periyar, and N. pillaii represent cases of taxonomic inflation (over-splitting), because the evidence cited in support of their recognition is irreproducible, subjective, and devoid of strong statistical support. We demonstrate the need for multidimensional species delimitation approaches in the celebrated Western Ghats biodiversity hotspot paleo-endemic genus Nyctibatrachus and suspect that this concerning trend of over-splitting amphibian species based on limited data and untenable support may be applicable to other amphibian groups.
Robin Kurian Abraham, Ramprasad Rao, Anil Zachariah and Rafe M. Brown. 2022. Integration of Ecology, Larval Phenotypes, and Mate-Recognition Signals with Molecular and Morphological Data Indicate Taxonomic Inflation in Nyctibatrachus (Anura: Nyctibatrachidae). Ichthyology & Herpetology, 110(3); 526-546. DOI: 10.1643/h2020139
Researchgate.net/publication/363914251_Integration_Taxonomy of_Nyctibatrachus
เขียนโดย pskhun ที่ 3:51 AM

The diversity of the brown frog genus Rana may be underestimated as the high similarity of morphological characters. In this study, a new species of Rana from Guizhou Province, China is described, namely Rana zhijinensis Luo, Xiao & Zhou, sp. nov. Molecular phylogenetic analyses clustered the new species into the R. japonica group of Rana and significant morphological characters can be distinguished from the 11 recognized species of the R. japonica group. This description increases the number of recognized Rana to 57 species and the R. japonica group to 12 species, and increases our knowledge of the diversity of the genus Rana.
Key words: Brown frogs, new species, diversity, taxonomy, morphology 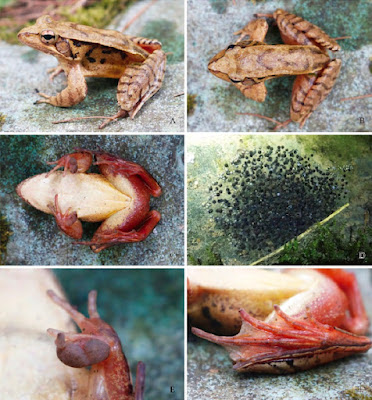 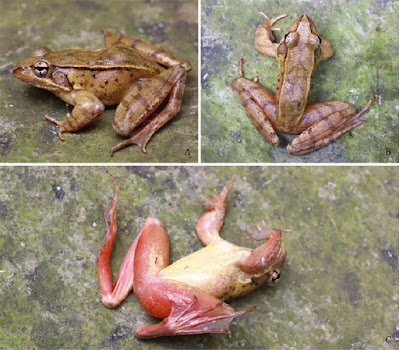 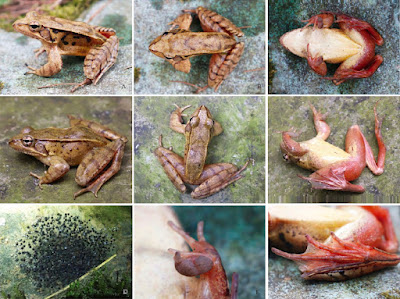