Samples of species close to Tremella fibulifera from China and Brazil are studied, and T. fibulifera is confirmed as a species complex including nine species. Five known species (T. cheejenii, T. fibulifera s.s., T. “neofibulifera”, T. lloydiae-candidae and T. olens) and four new species (T. australe, T. guangxiensis, T. latispora and T. subfibulifera) in the complex are recognized based on morphological characteristics, molecular evidence, and geographic distribution. Sequences of eight species of the complex were included in the phylogenetic analyses because T. olens lacks molecular data. The phylogenetic analyses were performed by a combined sequence dataset of the internal transcribed spacer (ITS) and the partial nuclear large subunit rDNA (nLSU), and a combined sequence dataset of the ITS, partial nLSU, the small subunit mitochondrial rRNA gene (mtSSU), the translation elongation factor 1-α (TEF1), the largest and second largest subunits of RNA polymerase II (RPB1 and RPB2). The eight species formed eight independent lineages with robust support in phylogenies based on both datasets. Illustrated description of the six species including Tremella fibulifera s.s., T. “neofibulifera” and four new species, and discussions with their related species, are provided. A table of the comparison of the important characteristics of nine species in the T. fibulifera complex and a key to the whitish species in Tremella s.s. are provided.
Keywords: Multi-gene, phylogeny, taxonomy, Tremellaceae
Long-Fei Fan, Renato Lúcio Mendes Alvarenga, Tatiana Baptista Gibertoni, Fang Wu and Yu-Cheng Dai. 2022. Four New Species in the Tremella fibulifera complex (Tremellales, Basidiomycota). MycoKeys. 82: 33-56. DOI: 10.3897/mycokeys.82.63241 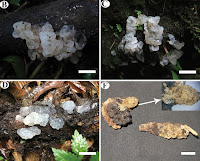 Abstract
A new species of the genus Hynobius is described from the western part of Aichi Prefecture, Japan. Hynobius vandenburghi can be divided into two groups, the Aichi and Kinki groups, based on molecular and morphological analyses; thus, we described the Aichi group of H. vandenburghi as a new species, Hynobius owariensis sp. nov.. Morphological comparisons revealed that although male H. vandenburghi have distinct bright yellow lines on the dorsal and ventral sides of the tail, males of the new species do not. Additionally, in males, the new species usually has fewer costal folds between its adpressed limbs than are observed in H. vandenburghi. Other significant differences in several morphological characteristics were also found between H. vandenburghi and the new species, and results of discriminant analyses between the two species in both sexes suggested that they are separated in terms of morphological data. The new species is restricted in the western part of Aichi Prefecture, which is threatened with extinction by artificial development or reformation of well-drained paddy fields.
Keywords: Chita Peninsula, discriminant analysis, extinction, Kinki District, mitochondrial DNA 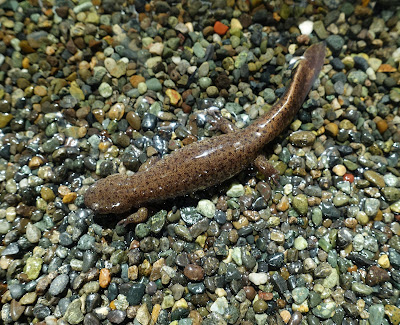 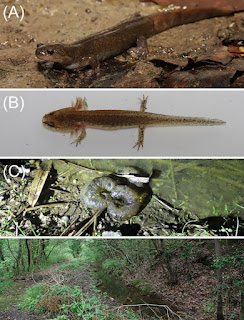 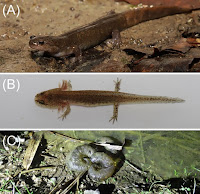 Abstract
Impatiens jacobdevlasii Herath, C. Bandara & Gopallawa sp. nov. (Balsaminaceae), a new species from Knuckles (Dumbara) massif of Sri Lanka is described and illustrated. The detailed morphological characters, diagnostic comparisons, notes on habitat and ecology are presented. According to the IUCN Red List Categories and Criteria, I. jacobdevlasii is assessed as Critically Endangered (CR) by virtue of its limited distribution range and decline of mature individuals.
Keywords: Eudicots, Balsam of Sri Lanka, biodiversity, conservation, Dumbara, taxonomy
Impatiens jacobdevlasii Herath, C. Bandara & Gopallawa sp. nov.
Diagnosis: Impatiens jacobdevlasii morphologically similar to I. truncata but differs by having pinkish or purplish color flowers with pink margin, bilobed upper petal of lateral united petals and yellow color centre blotch, linearlanceolate lateral sepal, 4–6 lateral nerve pairs, abaxially scattered pubescent and adaxially glabrous lamina.
Distribution: Impatiens jacobdevlasii is known from Dothalugala Mountain and Thangappuwa area in Knuckles massif of Sri Lanka.
Etymology: The specific epithet is named in honour of Dr. Jacob de Vlas, a Dutch biologist and the author of the tri-volume series of the ‘Illustrated field guide to the flowers of Sri Lanka’ in 2008–2019 documenting over 3000 native and introduced species of the Island. The common name for the species is Vlas’s balsam. 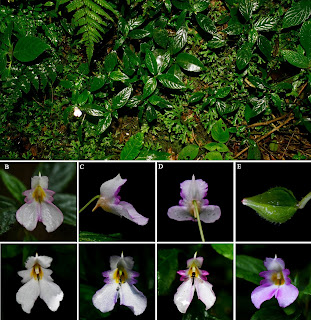 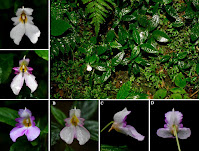 ABSTRACT
Eight new species of Gulella Pfeiffer, 1856 are described from south-eastern South Africa, occurring over a linear distance of 550 km within the Maputaland-Pondoland-Albany biodiversity hotspot. Seven species are narrow-range endemics, while Gulella kenbrowni sp. nov. occurs somewhat patchily over most of this distance. The very similar G. fordycei sp. nov. is recorded from only one small nature reserve in medium-altitude mistbelt forest. Six species, G. crookesi sp. nov., G. maraisi sp. nov., G. mkombeni sp. nov., G. abbotti sp. nov., G. donaikeni sp. nov. and G. calcicola sp. nov. each occur at one or a few isolated localities along a narrow strip of 140 km at or near the coast. The latter two are found only in the Marble Delta region, where mining has badly degraded and continues to threaten their habitat, and appear to meet the criteria for Red-Listing as Critically Endangered. Six species occur in nature reserves, highlighting the importance of small pockets of protected habitat for the conservation of terrestrial snails.
Keywords: Streptaxidae, new species, narrow-range endemism, priority conservation areas, Marble Delta hotspot, South Africa 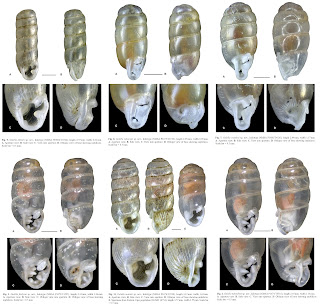 Abstract
In recent years, the eagle ray family Myliobatidae has undergone major taxonomic revisions due to molecular and morphological findings. A new species of eagle ray, Aetomylaeus wafickii sp. nov., is described based on specimens collected from the Arabian Gulf, Northwest Indian Ocean. The new species externally most closely resembles A. caeruleofasciatus White, Last, & Baje, 2015 in White et al. 2016 and A. nichofii (Bloch & Schneider, 1801). It can be distinguished from these species by a combination of morphological and meristic characteristics including a higher number of transverse pale bluish to light grey bands on its dorsal surface (8–10 in Aetomylaeus wafickii sp. nov. vs 5–8 in A. caeruleofasciatus and A. nichofii), a higher number of tooth plate rows (13–15 vs 7), a shorter upper tooth plate width (3.1–4.3 vs 4.6–7.5%DW), and a shorter tail ((0.9–1.6) vs (1.4–1.8)) times disc width. Pelvic fin radial counts separate the new species from A. nichofii for males (14–16 vs 16–19) and females (16–19 vs 20–21). Geographically, it occurs from the southern Red Sea, eastwards to the Arabian Sea, and south to Sri Lanka, including in the Arabian Gulf. It appears to be frequently caught as bycatch in gillnets due to its habit of schooling, and is considered particularly susceptible to impacts from regional fisheries. Morphological and meristic findings complement prior molecular evidence documenting three species within the A. nichofii complex. A key to the genus Aetomylaeus is provided for the first time.
Keywords: Chondrichthyes, Elasmobranch, Batoid, United Arab Emirates, Arabian Gulf, New species 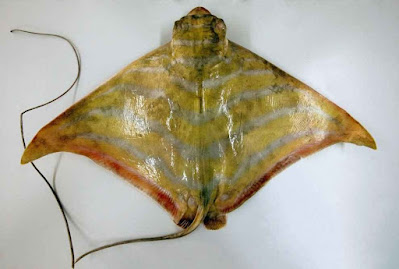 Abstract
Macrosolen zamboangensis, a new mistletoe species from the Zamboanga peninsula of the island of Mindanao (Philippines), is described. The new species is a member of the widespread M. melintangensis species complex, but differs from the previously described species in this complex in having a conspicuously papillose corolla head. It is also the only species in this complex that displays a combination of papi-lose pedicels, calycula and fruits, at least 3–4 inflorescence axes grouped at a node, and relatively small flowers that are clustered at the apex of a raceme (a subumbel) instead of being more evenly distributed along the inflorescence axis. The conservation status of this new species is considered Vulnerable (V).
Keywords: hemiparasitic plants, Macrosolen melintangensis, mistletoe, species com-plex, taxonomy, western Mindanao. 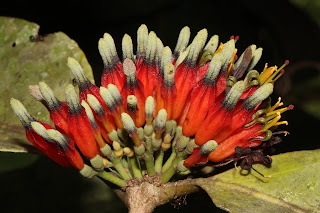 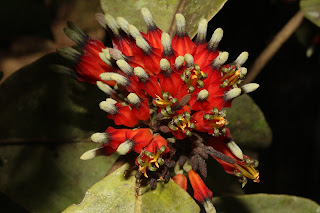 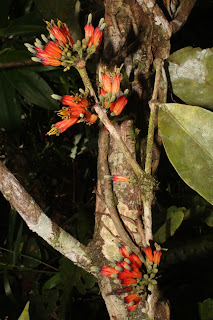 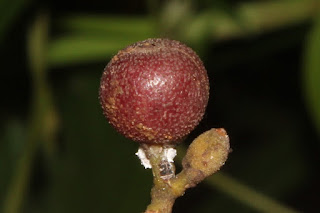 Macrosolen zamboangensis Mazo, Nickrent & Pelser, sp. nov.
Diagnosis: Macrosolen zamboangensis is similar to species of the M. melintangensis complex, but unique in having conspicuously papillose flowers and fruits in combination with relatively short corollas (i.e. less than 20 mm in mature flower buds) of flowers that are clustered in subumbels. The inflorescences are generally 3–4 per axil, more numerous than in other members of the complex.
Etymology: The specific name refers to the Zamboanga peninsula of the island of Mindanao, Philippines, where this species was discovered.
Distribution and habitat: Thus far, M. zamboangensis is only known from its type locality, which is in a disturbed lowland tropical rain forest and at 320–350 m elevation. Macrosolen zamboangensis was observed growing on Mangifera sp. (Anacardiaceae), Palaqium sp. (Sapotaceae), and species of Sapindaceae.
CONCLUDING REMARKS:
Naming a new species in a mistletoe genus such as Macrosolen presents a number of challenges. These include the absence of type specimens associated with various names, variations in descriptions of the same taxa by different authors, and weighing the extent of polymorphism present within a taxon prior to considering it a species. Although photographs of herbarium specimens provide invaluable data for this type of work, the quality of specimens varies considerably and crucial details (e.g. of flowers) are not always visible. For the Philippine flora in particular, specimens (including types) were destroyed in WWII and no collections currently held in PNH and various in-country university herbaria are digitized and available for viewing on the internet. To fully explore species boundaries in Macro-solen, the morphological character variation should be examined in the context of a molecular phylogeny, but currently no such data exist. As discussed here, the M. melintangensis complex may contain as few as four and as many as 13 species. All of these taxa can be characterized, more or less, by unique combinations of characters. For the 39 morphological characters considered here, we propose that M. zamboangensis shows sufficient phenotypic differences from other members of the complex to be considered a distinct species. 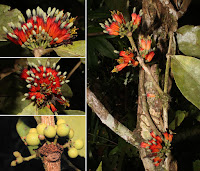 Abstract
A new species, Bulbophyllum lingii (Orchidaceae: Epidedroideae: Malaxideae) from Hainan, China, is described and illustrated. Detailed morphological comparisons indicate that B. lingii is similar to B. catenarium, but differs in having oblong petals, lip margins from base of side-lobes to lip tip recurved, adaxial surface of top part glabrous, stigma with a rather distinct basal callus, foot with about 1/3 free part. The conservation status of B. lingii is assessed and taxonomic notes are provided.
Keywords: Chinese orchids, sect. Macrocaulia, taxonomy, new species, Monocots 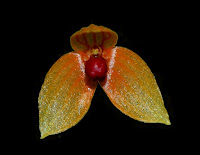 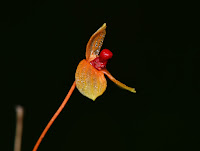 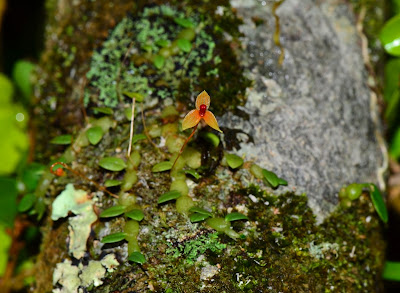 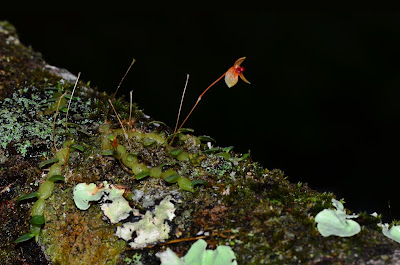 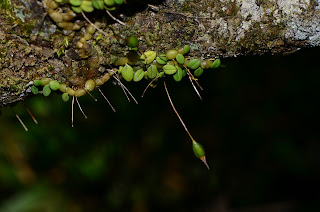 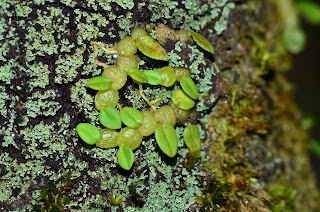 Abstract
Begonia ostulensis sp. nov. is a new species from section Knesebeckia, known solely from the state of Michoacán; it is similar to Begonia monophylla, an endemic species from Mexico with a distribution in the states of Mexico, Colima, Michoacán, Guerrero and Morelos, but B. ostulensis differs from it in having an orbicular, peltate, solitary leaf, with the lower and upper surfaces glabrous, a lobed and double-dentate, non-ciliate margin, inflorescences terminal, peduncle and rachis glabrous and fruit with primary wing asymmetrically triangular, glabrous.
Keywords: Aquila, Cucurbitales, deciduous tropical forest 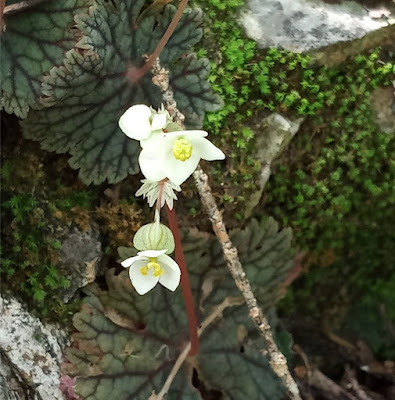 Begonia ostulensis Martínez & Ramos sp. nov.
§ Knesebeckia
Similar to B. monophylla Pav. ex A.DC. (1859:121), but differs in having orbicular, peltate leaves (vs. suborbicular to elliptic reniform or broadly ovate, basifixed leaves with a cordate base), that are glabrous on the lower and upper surfaces (vs. sparsely pubescent), with a lobed, double-dentate, non-ciliate margin (vs. with incised-dentate, ciliate margin, occasionally lobed); stipules fugacious (vs. persistent); inflorescence terminal (vs. axillary).
Etymology:—The name honors the type locality: Santa María Ostula, Aquila Municipality, Michoacan State, Mexico.
Distribution and habitat:—The species is only known from the type locality, on limestone rock ridges. Due to its size it is an inconspicuous species. It grows in cracks or lateral cavities of rocks (Fig. 2), never on the surface exposed to the sun, which makes it difficult to collect the tubers. Its life cycle is constrained by the rainy season (June to October); the leaf is observed in the first week of July, flowering occurs from July to September, in the month of November no flowers are found, only senescent leaves with dry fruits are observed. The type of vegetation is tropical deciduous forest, at elevations ranging from 604 to 828 m above sea level. It has been found in sites inhabited by Beiselia mexicana Forman (Burseraceae), another species endemic to the municipality of Aquila. 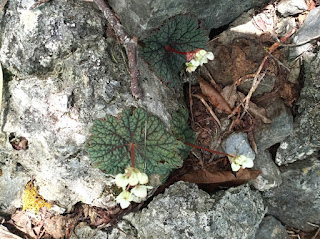 [Botany • 2022] A Revision of Gomphostemma (Lamiaceae)

[Botany • 2022] The Demise of Monechma: New Combinations and A New Classification in the Resurrected Genera Meiosperma and Pogonospermum (Acanthaceae)

[Invertebrate • 2022] Vampire Worms: A Revision of Galapagomystides (Phyllodocidae, Annelida), with the Description of Three New Species