Abstract
Cirolana khamensis sp. nov. and C. parawongat sp. nov. are described from specimens collected in the western Gulf of Thailand at depths of 8 metres and 1 metre, respectively. Both species belong to the Cirolana ‘pleonastica-group’ with tubercles on the dorsal surfaces, transverse sutures on the pereonites, pleonite 3 not posteriorly produced and pleonite 4 posterolaeral margin rounded. Cirolana khamensis sp. nov. can be distinguished from other species of Cirolana ‘pleonastica-group’ by lateral margin of uropodal exopod having five robust seatae and a continuous row of plumose marginal setae, pereonites 1–3 each with a single transverse impressed line; antennula peduncle with articles 1 and 2 distinct and articulated peduncle; pleotelson dorsal surface with two sub-median longitudinal carinae, each of which has four prominent tubercles. Cirolana parawongat sp. nov. can be distinguished by pereonites 1–3 without a single transverse impressed line and having nine tubercles on pleonite 4 and 5. A dichotomous key to Cirolana ‘pleonastica-group’ in South-East Asia region is given.
Keywords: Crustacea, Isopoda, Cirolanidae, Cirolana, new species, western Gulf of Thailand, coral reefs 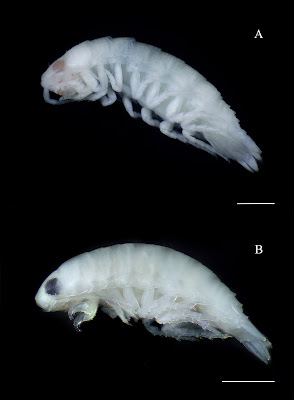 Abstract
Sphaeraphodius gaohani Kakizoe, Jiang & Wang, a new genus and new species of the tribe Aphodiini, is described based on two female specimens from Guangxi, China. This new genus differs considerably from any previously known genera of Aphodiini by dorsally swollen body covered by considerably long setae, and lack of transverse setiferous carinae on outer surfaces of meso- and metatibiae. This new taxon is found sympatrically with the termite Macrotermes sp. in the field. Therefore, this species is perhaps termitophilous, but we cannot conclude it at this time due to the insufficient information available in the field.
Keywords: Coleoptera, Scarabaeoidea, Scarabaeidae, Aphodiinae, Aphodiini, taxonomy, new genus, new species, Oriental region, East Asia, China, Guangxi, termitophily 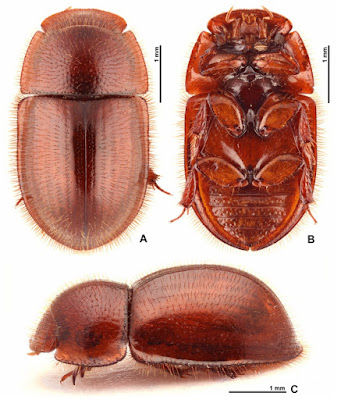 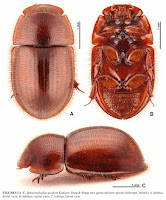 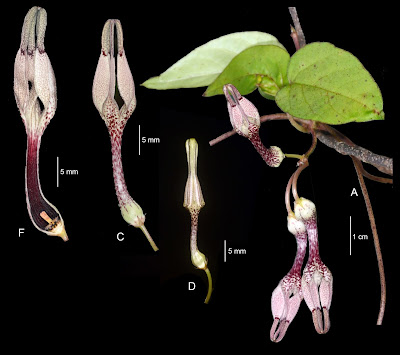 Ceropegia calcicola Kidyoo sp. nov.
Ceropegia calcicola differs from the morphologically similar C. khasiana in having ovate leaves, entirely glabrous corolla and shallowly bifid interstaminal corona lobes. In contrast, C. khasiana has lanceolate or linear-lanceolate leaves, corolla tube with a ring of trichomes on the inside at the distal part of the swollen basal portion, corolla lobes that are puberulent on the adaxial surface, and deeply bifid interstaminal corona lobes.
Etymology.– The specific epithet ‘calcicola’ refers to limestone hill, the usual habitat of this plant.
Ecology and distribution.– Ceropegia calcicola is endemic to Thailand, occurring on limestone rock in shady to open areas on limestone hills at 350–1600 m alt. It usually grows inside rock cracks or rock pools where humus soil has collected. Its branches climb up small shrubs or cliffs. Flowering occurs from July to October.
Ceropegia thorutii Kidyoo sp. nov.
Ceropegia thorutii is similar to C. elegans in having pedunculate cyme, strongly curved corolla tube being inflated at base, broadly ovate-triangular corolla lobes shorter than corolla tube and joined at tips forming a subglobose dome, but can be distinguished by its glabrous corolla tube being slightly inflated at base, bifid interstaminal corona lobes with triangular segments being shorter than half the length of the staminal corona lobes, and spathulate-clavate staminal corona lobes.
Ecology and distribution.– Ceropegia thorutii is endemic to Thailand, occurring on limestone rock in shady areas within highland limestone forest at 1,500–1,600 m alt. It grows inside rock cracks or rock pools where humus soil has collected or in calcareous soil intermingled with other herbs and small shrubs. Its stem and branches usually climb up on small shrubs and cliffs, or branches can be pendent. Flowering occurs in July–October.
Etymology.–The specific epithet, ‘thorutii’ was designated in honor of Mr. Chanin Thorut who first discovered and drew my attention to this plant.
Manit Kidyoo. 2021. Two New Species of Ceropegia (Apocynaceae, Asclepiadoideae) on Limestone Hills in Northern Thailand. Tropical Natural History. 21(1); 1-11. tci-thaijo.org/index.php/TNH/article/view/245810 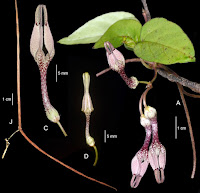 [Mammalogy • 2021] Molecular Phylogeny and Morphological Diversity of the Niviventer fulvescens Species Complex (Rodenti: Muridae) with Emphasis on Species from China

The type series of Semisulcospira multigranosa Boettger, 1886 was found in the Malacological Collection at the Senckenberg Naturmuseum for the first time ca. 135 years after its original description. The syntypes consisted of 38 specimens that can be classified into four species. The examination of adult shell morphology of these original materials revealed that the current taxonomic account of S. multigranosa should be amended. Therefore, we designate a lectotype for S. multigranosa, and thus describe S. multigranosa auct. as Semisulcospira davisi sp. nov. Semisulcospira davisi can be discriminated from the other congeners by the characteristics of adult and embryonic shells, and radulae morphology. The present study resolves one of the fundamental taxonomic problems remaining in Semisulcospira snails.
Key words: Freshwater snail, Lake Biwa, Syntypes, Viviparous, Radula morphology. 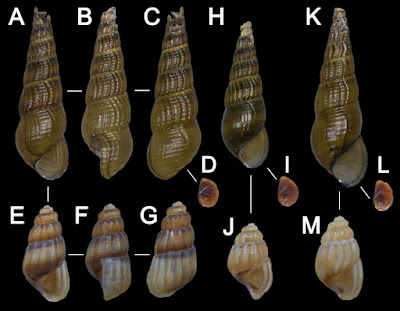 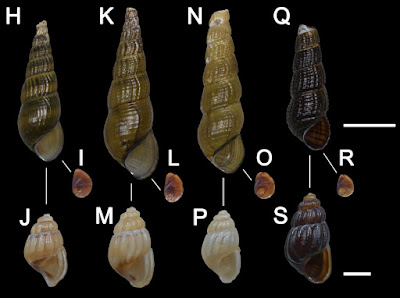 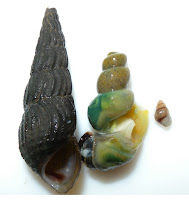 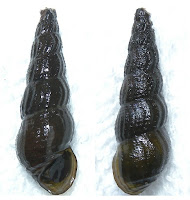 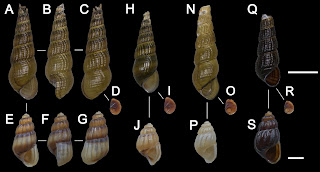 ABSTRACT
Abelisaurids are among the most abundant and diverse Patagonian Late Cretaceous theropods. Here, we present a new furileusaurian abelisaurid, Llukalkan aliocranianus gen. et sp. nov., represented by cranial remains from the Bajo de la Carpa Formation (Santonian) at La Invernada fossil area, northwestern Patagonia. Features characterizing this taxon include a possible caudal tympanic recess posterior to the columellar recess, a T-shaped lacrimal with jugal ramus lacking a suborbital process, and large foramina for caudal middle cerebral veins widely separated from the median supraoccipital crest. In addition to this, a bulge on the anteromedial border of the supratemporal fossa, tall and posteriorly projected paroccipital processes, basal tubera interconnected distally, a triangular basisphenoid recess, and a single foramen for the sphenoidal artery on the basisphenoid, differentiate Llukalkan from Viavenator exxoni. The latter is the other furileusaurian taxon from the same area and stratigraphic unit. Although the holotype of Llukalkan probably corresponds to a sub-adult—as the lacrimal morphology suggests— the possibility that it represents a juvenile of V. exxoni is discarded based mainly on the presence of a caudal tympanic recess (which is absent in V. exxoni). The probable coexistence of two abelisaurid taxa demonstrates that the abelisaurids were one of the most important—and likely the main—predator component of the ecosystems, not only in this area, but also in all of Patagonia, during the Late Cretaceous. 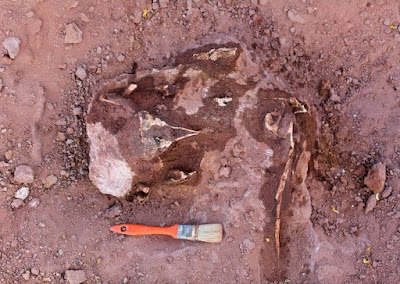 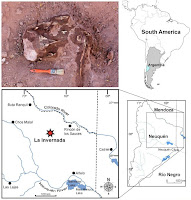 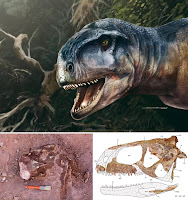 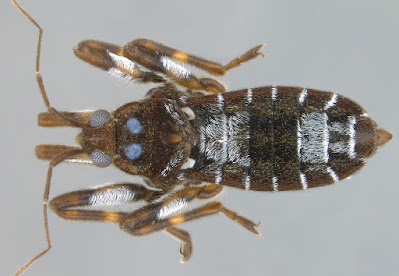 Abstract
We describe a new small-bodied, polymorphic Cnemaspis from near Hongadahalla village, Sakleshpur in the Central Western Ghats of Karnataka, India. Cnemaspis schalleri sp. nov. is allied to C. monticola and can be diagnosed from all other Indian Cnemaspis by its small body size; presence of spine-like tubercles on flank; heterogeneous dorsal pholidosis; presence of both precloacal and femoral pores in males; dorsal pholidosis of tail heterogeneous, composed of small, weakly keeled, flattened, sub-imbricate scales intermixed with enlarged, strongly keeled, distinctly pointed, conical tubercles forming whorls; slightly enlarged median row of sub-caudal scales, smooth at anterior half and strongly keeled posteriorly. The new species differs from C. monticola based on the number of dorsal tubercle rows at mid-body, the number of paravertebral tubercles, the number of precloacal pores and poreless scales between precloacal and femoral pores; besides 8.9–10.7 % uncorrected ND2 sequence divergence. We also provide the first description of topotypic males of C. monticola along with the first data on live colouration and natural history. Cnemaspis schalleri sp. nov. is the second new Cnemaspis described from around Sakleshpur within a span of less than a year with minimal field survey effort. It is almost certain than the dedicated systematic sampling across the Central Western Ghats will result in the discovery of many undescribed Cnemaspis lineages.
Keywords: Reptilia, Cnemaspis monticola, dwarf geckos, endemic, ND2, South Asian Cnemaspis, systematics, Western Ghats 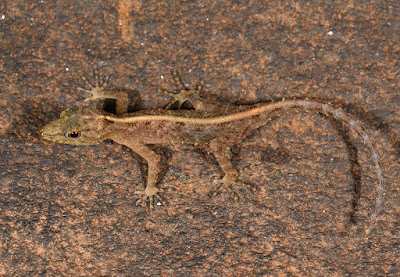 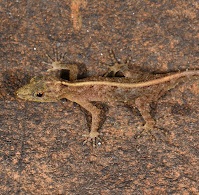 ABSTRACT
The genus Megophrys is known to harbour morphological cryptic species diversity. During field work on Vietnam’s third highest peak, Mount Ky Quan San, north-west Vietnam, we collected specimens of a new species of Megophrys at two locations more than 2000 m above sea level (asl). Phylogenetic analyses using mitochondrial markers place the new species within the subgenus Panophrys, a primarily Chinese radiation within the genus Megophrys. We describe the species based on an all-male type series and distinguish it from all other Megophrys species from mainland Southeast Asia, north of the Isthmus of Kra and nearby provinces of China (Yunnan, Guangxi and Guizhou) based on morphological, molecular and bioacoustic data. The new species is inferred to form a clade along with M. hoanglienensis and M. fansipanensis; it is syntopic with the former but has a non-overlapping range with the latter. Uncorrected p distances for the 16S rDNA and CO1 genes between the new species and closest relatives exceed values observed between other closely related species in the Panophrys subgenus. The new species is most similar to M. fansipanensis in terms of morphology, and several call parameters also overlap with this species; however, these two species call at different times of year. This is the fourth likely range-restricted and Endangered Megophrys species described from the Hoang Lien Range since 2017, and this discovery further highlights the significance of the Hoang Lien Range for Vietnam’s amphibian diversity.
KEYWORDS: Anura, bioacoustics, Hoang Lien, Panohphrys, Xenophrys 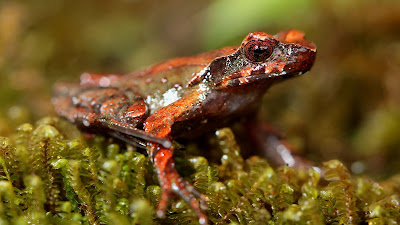 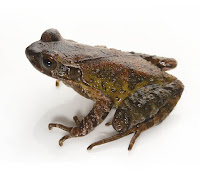 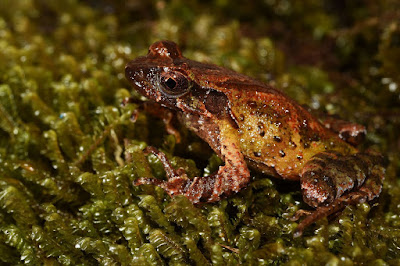 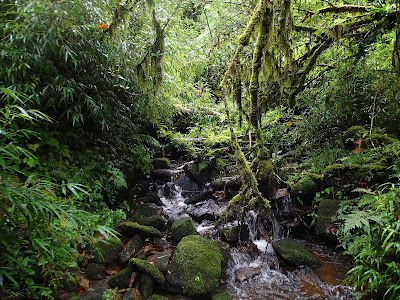 Abstract
Clerodendrum angustipetalum (Lamiaceae), an endemic species to Narathiwat province, southern Thailand, is described and illustrated as a species new to science. It is similar to C. nutans in having an elongate pendulous inflorescence, but   essentially differs in the thicker leaf texture (subcoriaceous vs membranaceous), the calyx tube being almost twice as long and the corolla lobes being half as broad. In addition, the new species has longer calyx lobes, corolla lobes and stamens.  The conservation status of this species is assessed as Critically Endangered (CR, B2a + b(ii, iii)+C2ai+D)  due to being known from a single locality with a small population of less than 50 individuals. A morphological comparison between similar species and an updated key to Clerodendrum species with pendulous inflorescences from southern Thailand is also presented.
Keywords: Lamiaceae, Clerodendrum, new species, southern Thailand, Narathiwat Province 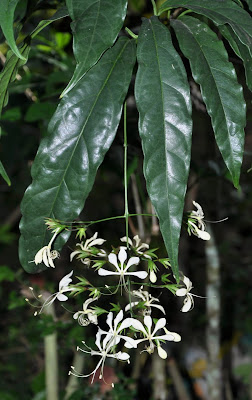 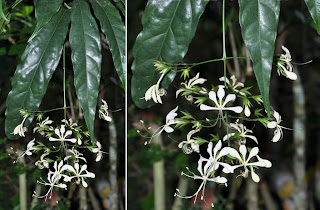