[Herpetology • 2021] Leptopelis diffidens • A New Species of Leptopelis (Anura, Arthroleptidae) from the south-eastern slope of the Ethiopian Highlands, with Notes on the Leptopelis gramineus Species Complex

Abstract
A new ground-dwelling species of treefrog in the genus Leptopelis is described from the Harenna Forest in south-eastern Ethiopia. The description is based on morphology and acoustics and is supported by molecular data. The new species has a small body size, and the digital discs on fingers and toes are significantly more conspicuous than in other semi-fossorial members of the L. gramineus complex. It occupies forest habitats at lower altitudes and is separated ecologically and geographically from high-altitude species of the complex. One of them, a parapatric cryptic species from Bale and Arsi Mountains, is resurrected from synonymy of L. gramineus and given a new name, L. montanus. Genetic barcoding of specimens from both populations showed that they belong to two distinct lineages that had been revealed by recent phylogenetic research. To confirm the geographic separation of the studied populations, the collection area of L. gramineus types was verified through analysis of the diary and the final report of the 2nd expedition of V. Bottego, and through matching of the route described in it with modern maps. The type locality of L. gramineus sensu stricto is restricted to Gamo Gofa, Ethiopia. Following the results of recent phylogenetic studies, the range of L. gramineus is limited to west of the Great Rift Valley. An identification key to the named Ethiopian species of the genus is provided.
Keywords: Bale Mountains, Ethiopia, Harenna Forest, Leptopelis diffidens sp. nov., Leptopelis montanus nom. nov., Leptopelis rugosus, Pseudocassina ocellata, Pseudocassina rugosa
Leptopelis diffidens sp. nov.
Diagnosis: Medium-sized (SVL of males ca. 24–29 mm, females ca. 35–40 mm) ground-dwelling and burrowing frog with robust body, relatively wide and short head, and short limbs. Terminal phalanges of toes and fingers expanded to small, but distinct discs. Only base phalanges of toes II–IV with broad web; on toe V the web extends along phalanges 1 and 2. The rest of toe phalanges with feeble fringe. Fingers are free of web or fringe. Light-brown or light olive-green from above; either no dorsal pattern, or three indistinct broad longitudinal bands (one vertebral and two dorsolateral) present that are slightly darker than the ground colour. Males with pectoral glands. Advertisement call: quiet, high-pitched singleton ‘quack’, repeated at intervals of ca. 20 seconds.
Etymology: The Latin adjective diffidens (used here in nominative singular) means diffident, anxious, shy, mistrustful. This name refers to the behaviour of this frog that appears even more cryptic and defensive than L. gramineus from other populations. The vocalisation of a male is so quiet that the animal is very difficult to locate and to spot. When approached, at a distance of only 5 m, it stops calling and remains silent until the disturber has gone away or has not moved for at least 10 minutes. As a vernacular name for this species, we propose ‘Harenna Burrowing Treefrog’.
...
In accordance with Article 50 and Paragraph 3 of Article 60 of ICZN, we establish a substitute name Leptopelis montanus nom. nov. for Leptopelis ocellatus (Ahl, 1924) to resolve its homonymy with Leptopelis ocellatus (Mocquard, 1902).
Etymology: The new specific name montanus (living in mountains, montane) refers to the fact that this species ranges into afromontane areas up to elevation of almost 4000 m a.s.l., thus being a Leptopelis with probably the highest altitudinal distribution. The name is an adjective in nominative singular. 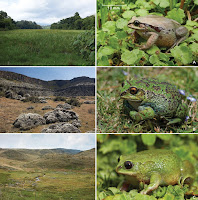 Arthur Tiutenko and Oleksandr Zinenko. 2021. A New Species of Leptopelis (Anura, Arthroleptidae) from the south-eastern slope of the Ethiopian Highlands, with Notes on the Leptopelis gramineus Species Complex and the Revalidation of A previously Synonymised Species. ZooKeys 1023: 119-150. DOI: 10.3897/zookeys.1023.53404 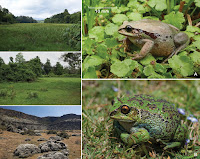 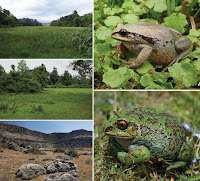