Abstract
The Middle–Late Jurassic transition period is a critical period for the evolution of terrestrial vertebrates, but the global fossil record from this time is relatively poor. The Shishugou Fauna of this period has recently produced significant fossil remains of dinosaurs and other vertebrate groups, some representing the earliest known members of several dinosaurian groups and other vertebrate groups and some representing the best-known specimens of their group. These discoveries are significant for our understanding of the origin and evolution of several vertebrate lineages. Radiometric dating indicates that the fauna is aged approximately 159–164 Ma. Comparisons with other similarly-aged terrestrial faunas such as Shaximiao and Yanliao show both taxonomic similarities and differences between these faunas and indicate that the Junggar deposits might have preserved the most complete vertebrate fossil record for a Middle–Late Jurassic Laurasian terrestrial fauna.
Keywords: Middle–Late Jurassic, Shishugou Fauna, Shishugou Formation, terrestrial ecosystem, Shaximiao, Yanliao, Junggar Basin 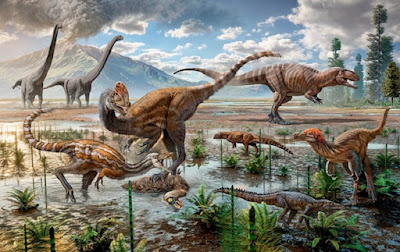