Abstract
A new species, Cryptocoryne aura Wongso & Ipor, from West Kalimantan, Indonesia, is described and illustrated. It differs from other Cryptocoryne species primarily by having a transparent, ciliate membrane along the leaf margin and a short spathe with a yellow, forward-twisted limb. It has a chromosome number of 2n = 26, which has not hitherto been recorded within the genus. The morphology of the germinating seed is unique within the genus, the embryo emerging c. ⅓ from the distal end of the seed with 3(or 4) plumulary processes (prophylls). 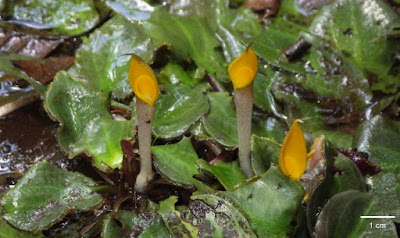 Diagnosis — Cryptocoryne aura differs from all other Cryptocoryne species by having the leaf blade margin with a distinct, whitish, slightly transparent, undulate membrane with whitish, short, ciliate trichomes. The germinating seed is unique within the genus in that the embryo emerges c. ⅓ from the distal end of the seed and bears 3(or 4) plumulary processes (prophylls). Its chromosome number of 2n = 26 has hitherto not been recorded for Cryptocoryne.

Etymology — The epithet alludes to the well-developed, slightly transparent, whitish membrane surrounding the leaf margin, which is likened to an aura.

Remarks — Cryptocoryne aura has a growth stature resembling that of C. elliptica Hook. f. (Peninsular Malaysia) and C. bogneri Rataj (Sri Lanka) in having all parts of the plant of small size and a rosette of many leaves, indicating that the plants are situated in shallow water with the leaf blades just below the water surface. This common rosette phenomenon in these species is no doubt an adaptation to similar habitat niches and does not necessarily reflect a close phylogenetic relationship.

The morphology of the germinating embryo is unique for the genus, with the seeds having a rather thin and pointed distal end, with the embryo breaking through the testa c. ⅓ from this end with 3(or 4) plumulary processes (prophylls); the primary root emerges from the distal end of the seed, while secondary roots emerge along with the plumulary processes.