[Herpetology • 2016] Ansonia teneritas • From A Lost World: An Integrative Phylogenetic Analysis of Ansonia Stoliczka, 1870 (Anura: Bufonidae), with the Description of A New Species from Borneo


Abstract
While the island of Borneo is considered a global biodiversity hotspot, the species richness in many groups remains unknown and appears underestimated. During herpetological surveys carried out in the interior of Sarawak, East Malaysia, several individuals of a small species of the genus Ansonia Stoliczka 1870 were collected on the Usun Apau plateau and in the Gunung Hose mountain range (Ansonia sp. Usun Apau). An integrative taxonomic approach comprising phylogenetic (2.4 kb mitochondrial rDNA fragment, Bayesian Inference and Maximum Likelihood, >5.1 % to its closest relative) and morphometric analyses (25 measurements, multivariate ratio analysis and linear discriminant analysis), as well as morphological comparisons support the status of this operational taxonomic unit as a separate taxon at species level. The obtained phylogenetic hypothesis corroborates the two major clades within Ansonia found in previous studies. Within Clade One Ansonia sp. Usun Apau and the enigmatic Ansonia torrentis are part of a monophyletic group of the Bornean species Ansonia hanitschi, Ansonia minuta, Ansonia platysoma, Ansonia spinulifer, Ansonia vidua, and two additional undescribed taxa. This subclade must be considered as the result of an on-island radiation in the complex evolution of Ansonia. The new species is formally described including the identification of diagnostic morphometric traits. Ansonia sp. Usun Apau is endemic to two isolated mountain ridges in central Sarawak and must be considered as a new element of the unique diversity of the Bornean amphibian fauna that is potentially threatened by habitat loss at least in parts of its range.

Diagnosis: The new species is assigned to the genus Ansonia on the basis of a robustly supported phylogenetic hypothesis (Fig. 3) and the presence of the following morphological characters: body slender, subarticular tubercles indistinct, limbs long and slender, webbing membranous, parotid glands absent, and tympanum visible (Inger 1960, 1966).

Ansonia teneritas sp. nov. can be distinguished from all congeners by the following combination of characters: (1) SVL in males <22 mm, in females <25 mm; (2) snout clearly projecting in profile; (3) head depressed; (4) longitudinal interorbital ridges absent; (5) first finger short, not reaching base of tip of second finger when adpressed; (6) no sharp tarsal ridge; (7) skin flaps on posterior thigh near vent absent; (8) warts on temporal regions not enlarged; (9) coloration olive-green with a contrasting dark brown pattern on head and dorsum; (10) whitish pattern below the eye on upper lip; (11) white warts behind jaw joint, on shoulders and flanks; (12) iris bright red-orange with an irregular network of black reticulations.

Etymology: The species name teneritas, Latin for ‘tenderness’, refers to the gracile body shape and small body size of this species in comparison to congeners. We suggest the English name ‘Gracile Slender Toad’. 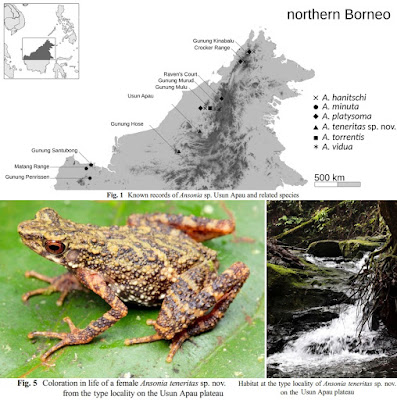 Ecological notes: The type locality of Ansonia teneritas sp. nov. is a small tributary of the upper reaches of the Sungei Julan, just above the spectacular falls of the Sungei Julan Valley on the northern side of the Usun Apau plateau (Fig. 8). The Usun Apau plateau is part of the Central Bornean plateau and forms the watershed between the Rejang and Baram river basins in central Sarawak (Hutchison 2005; Rousseau 1977). The Sungei Julan is a tributary of the Baram drainage system. It consist of several tablelands and smaller plateaus with an elevation of approximately 760–1000 m with sharply cut edges, precipitous cliffs, and deep marginal embayments (Hutchison 2005). The Usun Apau highlands were formed by extensive volcanic activity during the Upper Miocene to Quaternary, and the few mountains that stand over 300 m above the tablelands are relicts of former volcanoes (Hutchison 2005). As a result of their volcanic formation history the high tablelands of the central area are built up of dacite tuff and agglomerate, while the southern mountains are covered by basalt lava (Hutchison 2005; Campbell 1956). The area covers about 700 sq. km of forest and has been protected as the Usun Apau National Park since 2005. 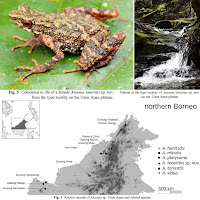 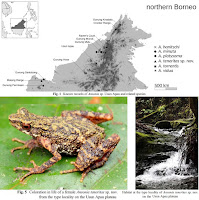