[Herpetology • 2016] Out of Africa: Phylogeny and Biogeography of the Widespread Genus Acanthodactylus (Reptilia: Lacertidae) 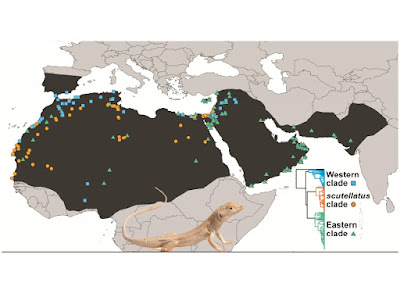 Abstract
Acanthodactylus lizards are among the most diverse and widespread diurnal reptiles in the arid regions spanning from North Africa across to western India. Acanthodactylus constitutes the most species-rich genus in the family Lacertidae, with over 40 recognized species inhabiting a wide variety of dry habitats. The genus has seldom undergone taxonomic revisions, and although there are a number of described species and species-groups, their boundaries, as well as their interspecific relationships, remain largely unresolved. We constructed a multilocus phylogeny, combining data from two mitochondrial (12S, cytb) and three nuclear (MC1R, ACM4, c-mos) markers for 302 individuals belonging to 36 known species, providing the first large-scale time-calibrated molecular phylogeny of the genus. We evaluated phylogenetic relationships between and within species-groups, and assessed Acanthodactylus biogeography across its known range. Acanthodactylus cladogenesis is estimated to have originated in Africa due to vicariance and dispersal events from the Oligocene onwards. Radiation started with the separation into three clades: the Western and scutellatus clades largely distributed in North Africa, and the Eastern clade occurring mostly in south-west Asia. Most Acanthodactylus species diverged during the Miocene, possibly as a result of regional geological instability and climatic changes. We support most of the current taxonomic classifications and phylogenetic relationships, and provide genetic validity for most species. We reveal a new distinct blanfordii species-group, suggest new phylogenetic positions (A. hardyi, A. masirae), and synonymize several species and subspecies (A. lineomaculatus, A. boskianus khattensis and A. b. nigeriensis) with their phylogenetically closely-related species. We recommend a thorough systematic revision of taxa, such as A. guineensis, A. grandis, A. dumerilii, A. senegalensis and the pardalis and erythrurus species-groups, which exhibit high levels of intraspecific variability, and clear evidence of phylogenetic complexity. 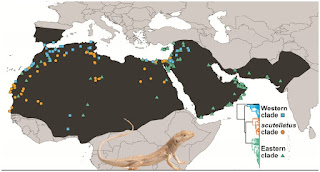