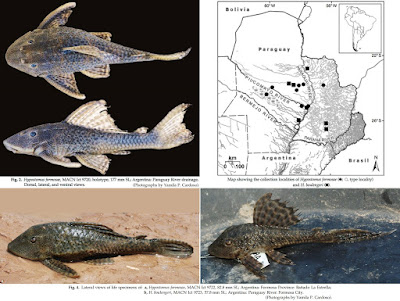 Hypostomus formosae, new species, is described from the Paraguay River Basin and H. boulengeri is redescribed. Morphological and molecular analyses show that these two species belong to the ‘H. plecostomus species group’. Hypostomus formosae can be distinguished from H. boulengeri by having the tip of the snout completely covered with small plates (vs. naked snout tip) and fewer premaxillary and dentary teeth (13-28 vs. 16-32, and 10-25 vs. 15-31, respectively). The molecular phylogenetic analysis indicates that the sister species of H. formosae is H. plecostomus from the Amazon and the Guyanas, highlighting past inter-basin ichthyofauna exchanges. 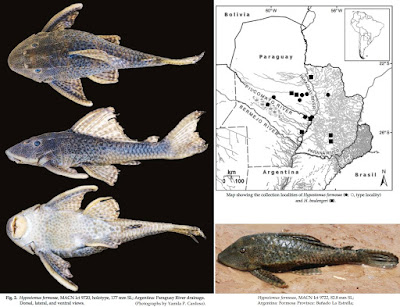 Distribution. Hypostomus formosae is known from the Paraguay River Basin in Argentina and Paraguay.

Ecological notes. Habitat description based on collecting localities of MACN Ict 9720, 9721, 9722 and CFA IC-11972. The specimens were obtained recently at three sites in the Paraguay River Basin: La Estrella, Saladillo Stream and Riacho Porteño, Argentina. The bottom of these streams was mainly composed of sandstone boulders with patches of sand and pebbles. Hypostomus formosae was found in well oxygenated waters (5.9-6.6 mg·l -1 ) with moderate current. Water turbidity was 51.1-98.1 N.T.U., conductivity 67-660 µS· cm-1 , and the pH 6.4-7.3. We do not have habitat information for the others specimens.

Etymology. The species is named after the Formosa Province, Argentina. A noun in genitive.

Diagnosis. Hypostomus boulengeri is distinguished from species of the Hypostomus cochliodon species group by having bicuspid teeth (vs. unicuspid spoon-shaped teeth). The color pattern of H. boulengeri (dark roundish dots on a lighter background) differenciates this species from species that have dorsum dark grey/brown covered by numerous rounded creamy dots. Hypostomus boulengeri is distinguished from the rest of its congeners, with the exception of H. piratatu and H. formosae, by the combination of high values for mandibulary ramus length (9-16 % HL), orbital diameter (13-20 % HL), upper caudal-fin ray length (24.9-42.8 % SL) and lower values for caudal-fin ray length (26.1-46.4 % SL), and by having 25-26 plates in the median plates series. Hypostomus boulengeri can be distinguished from H. piratatu by the shape of teeth (short vs. long crown) and from H. formosae by having the snout tip with a naked zone (vs. completely covered with minute plates) (Fig. 3) and more premaxillar and dentary teeth (16-33 vs. 13-28 and 15-33 vs. 10-25, respectively).

Distribution. Hypostomus boulengeri is known from the Paraguay River Basin in Argentina, Brazil and Paraguay.

Ecological notes. Based on the collecting locality of sample MACN Ict 9723. These specimens were found in the margin of the large Paraguay River. The bottom of the river is made of sand and pebbles. The surface of the water was covered by vegetation. The specimens were found in well oxygenated waters (4.97 mg·l -1 ) with slow current. Water turbidity was 193 N.T.U. Conductivity was 163.3 µS· cm-1 . The pH was 6.9. We do not have ecological information for the others specimens. 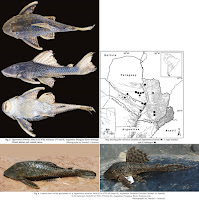 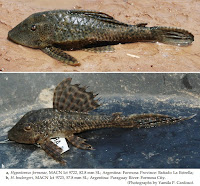