Inocybe distincta sp. nov. is described from Kerala State, India. A comprehensive description, photographs, line drawings and comments are provided. The nuclear ribosomal internal transcribed spacer region (ITS), a portion of the nuclear ribosomal large subunit (nrLSU) and a portion of the nuclear second-largest subunit of RNA polymerase II (RPB2) gene of this species were sequenced and analyzed. BLASTn searches using nrLSU and RPB2 sequences and subsequent ML phylogenetic analysis of combined nrLSU and RPB2 sequences confirmed that Inocybe distincta is a representative of the Nothocybe lineage. As the Nothocybe lineage is assumed to have affinities to I. cutifracta, and as there are different interpretations of that species, we examined the holotype of I. cutifracta collected by T. Petch and another collection from Sri Lanka identified as I. cutifracta by D. N. Pegler, and we present here our observations on these collections. 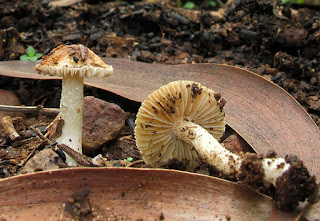