[Ornithology • 2014] Structure and Function of the Cassowary (Casuarius)'s Casque and Its Implications for Cassowary History, Biology and Evolution 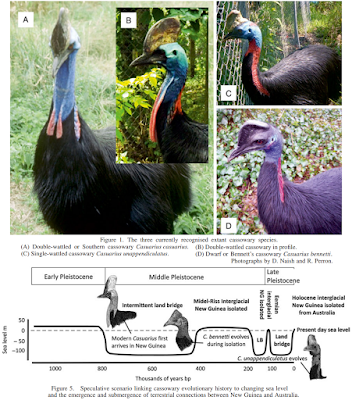 Abstract
Cassowaries (Casuarius) possess a cranial casque, sheathed by keratin and composed of modified cranial bones. We combine data and hypotheses on three areas of cassowary research. First, we present novel observations on casque anatomy. The bony core is fragile, incorporating a mass of trabeculae anteriorly and an empty space posteriorly. Secondly, we use these observations to evaluate hypotheses of casque function. Implications that the casque evolved within the context of activities involving percussive actions are unlikely and observations that might support these hypotheses are absent. It is most likely that the casque serves a sociosexual role and functions in visual and acoustic display. The similarity in casque form between males and females, combined with male parental investment, makes it plausible that the extravagant structures present in cassowaries evolved within the context of mutual sexual selection. Thirdly, we combine morphological, molecular and geological evidence to provide a new phylogenetic history for cassowaries. We suggest that cassowaries invaded New Guinea in at least two waves and provisionally regard crown–cassowaries as a geologically young, post-Pliocene clade. We provide these hypotheses as areas requiring discussion and urge other workers to test our ideas with new data on cassowary anatomy, behaviour and genetics. 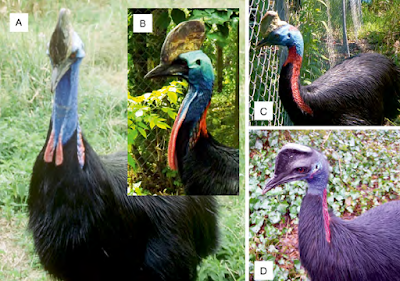 Darren Naish and Richard Perron. 2014. Structure and Function of the Cassowary's Casque and Its Implications for Cassowary History, Biology and Evolution.
Historical Biology. DOI:  10.1080/08912963.2014.985669
http://perron.eu/Publications/A%20new%20appraisal.pdf
ResearchGate.net/publication/268817398_Structure_and_function_of_the_cassowary's_casque_and_its_implications_for_cassowary_history_biology_and_evolution