Until recently, the agamid species, Japalura flaviceps, was recognized to have the widest geographic distribution among members of the genus occurring in China, from eastern Tibet to Shaanxi Province. However, recent studies restricted the distribution of J. flaviceps to the Dadu River valley only in northwestern Sichuan Province, suggesting that records of J. flaviceps outside the Dadu River valley likely represent undescribed diversity. During two herpetofaunal surveys in 2013 and 2015, eight and 12 specimens of lizards of the genus Japalura were collected from the upper Nujiang (=Salween) Valley in eastern Tibet, China, and upper Lancang (=Mekong) Valley in northwestern Yunnan, China, respectively. These specimens display a unique suite of diagnostic morphological characters. Our robust comparisons of phenotype reveal that these populations can be distinguished readily from J. flaviceps and all other recognized congeners. Here-in, we describe the two Japalura lineages as new species, Japalura laeviventris sp. nov. and Japalura iadina sp. nov.. In addition, we provide updated conservation assessments for the new species as well as imperiled congeners according to the IUCN criteria for classification, discuss the importance of color patterns in the diagnosis and description of species in the genus Japalura, and discuss directions for future taxonomic studies of the group.

Distribution and Natural History: Japalura laeviventris sp. nov. is known only from its type locality in the upper Nujiang Valley (Figure 1); however, the species may also occur along geographically proximate stretches of Nujiang. Little vegetation exists in the Hot- and -Dry Valley (Figure 4). The new species is terrestrial, with individuals have been observed on the s and y hills alongside the river, utilizing rock crevices and rodent burrows as shelters. No larger reptiles have been recorded from the area. Males of the new species are more conspicuous in behavior than females, and can be observed basking for greater lengths of time in open habitat. In contrast, females appear to stay in closer proximity to shelters. 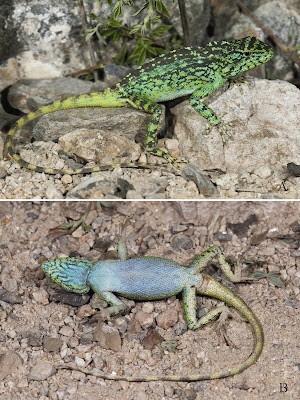 Distribution and natural history: Although locally abundent, Japalura iadina sp. nov. is known only from the type locality (Figure 1). The new species is terrestrial, inhabiting dry, rocky habitats along the Lancang River (Figure 7). The emerald green coloration of the males makes them st and out from the rocky, environmental background. Tail autotomy has been observed for this population. 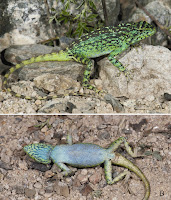