Limestone and marl from Maria Farinha Formation (Paraíba Basin, NE Brazil) accumulated in a shallow continental shelf environment during the expansion of the Atlantic Ocean in early Paleocene (Danian). It contains a rich paleontological record, which comprises many marine invertebrates, several species of bony and cartilaginous fishes, a crocodyliform and turtle remains. Here, we describe a new genus and species of pleurodire turtle from Maria Farinha Formation, based on a nearly complete plastron, an incomplete left pelvic girdle, and four dermal plates of the carapace. We tested the phylogenetic position of Inaechelys pernambucensis gen. et sp. nov. by including it in a comprehensive cladistic analysis of pleurodires. The new species is included within Botrhemydidae, with affinities to Bothremydini, positioned as sister group of Rosasia soutoi. Inaechelys pernambucensis gen. et sp. nov. differs from R. soutoi for the almost straight anterior lobe cranial edge of its plastron, as well as for its pentagonal shaped entoplastron and its abdominal shield midline, which is considerably smaller than the respective femoral shield midline. Inaechelys pernambucensis is the first turtle species formally described from Brazilian Paleocene strata. Within Bothremydidae, it is also the first conclusively fully marine species described for this country. This new record contributes to the understanding of the ecology and paleobiogeographical distribution of Bothremydidae family. 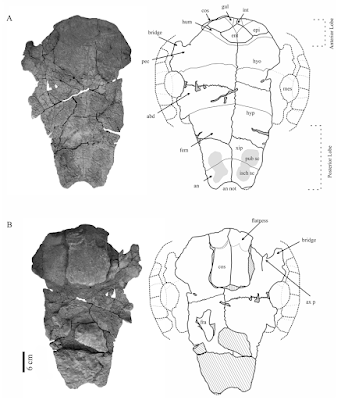 Etymology. The generic name Inae is a variant of ‘Yemanja’, deity of the sea in many African cults, introduced to Brazil during slavery; chelys is from "turtle". The specific epithet pernambucensis refers to state of Pernambuco, where the fossil was found.

Diagnosis. Medium to large sized Pelomedusoides with plastron consisting on 11 bones; pubic scar in the xiphiplastron, as usual in Pleurodira; anterior lobe of the plastron short and wide at its base, with the pectoro-abdominal groove in front of the mesoplastron, as in all the Bothremydidae. The humeropectoral sulcus does not contact the entoplastron or the epiplastron; the interfemoral dermal groove is longer than the dermal intraabdominal groove; and the plate sutures are highly serrated. Inaechelys pernambucensis differs from Rosasia soutoi by the following set of features: Inaechelys presents pentagonal shaped entoplastron, straight contour of anterior lobe cranial margin, abdominal shield midline notably smaller than the femoral shield midline and contact between plastron plates strongly serrated. 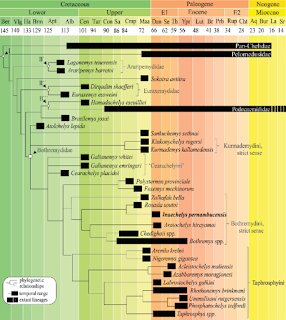