[Herpetology • 2014] The Rediscovery of Perret’s Toad, Amietophrynus perreti (Schiøtz, 1963) after more than 40 years, with Comments on the Species’ Phylogenetic Placement and Conservation Status

Abstract
Perret's toad, Amietophrynus perreti, has not been seen since 1970 and thus believed to be lost. We searched for the species 50 years after its original description and successfully recorded its continued presence at the type locality, where it seems to maintain a viable population. We failed however, to record the species at suitable sites elsewhere and A. perreti could thus indeed be a micro-endemic species, specialized and restricted to the granite inselbergs of the Idanre Hills, Nigeria. We recorded and discuss potential threats and suggest keeping the toad's current conservation status as 'Vulnerable'. We investigated the systematic status of Perret's toad using a mitochondrial fragment of the 16S rRNA gene and could confirm that it is a member of the genus Amietophrynus despite its aberrant larval biology, different to the rest of the genus. In spite of this biological difference, A. perreti is not a phylogenetically isolated lineage, but is nested within a clade of western African Amietophrynus species, such as A. maculatus, A. regularis, A. latifrons and A. togoensis and is sister to the widespread and savannah dwelling A. maculatus. 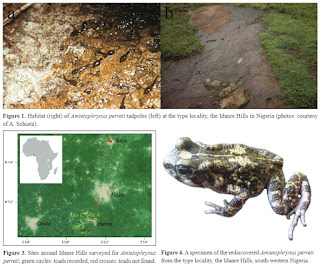