[Herpetology • 2011] Review of the Genus Dopasia Gray, 1853 (Squamata: Anguidae) in the Indochina Subregion 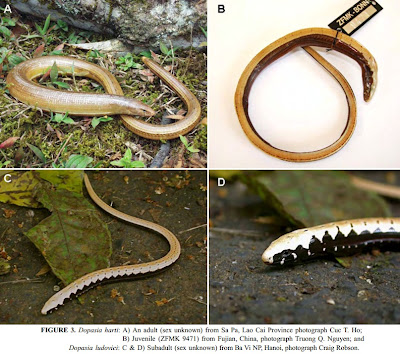 Abstract
A review of the genus Dopasia Gray, 1853 in the Indochina subregion is provided with the first country record of D. hainanensis for Vietnam and new distribution records for other species. In addition, we herein confirm the validity of Dopasia ludovici, previously a synonym of D. harti, based on overlooked external morphological differences. 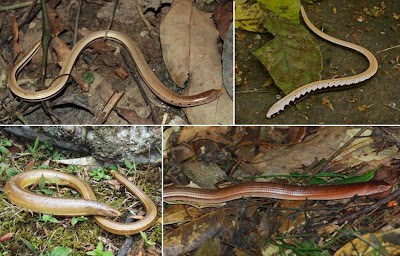 Discussion
Based on morphological features, the members of Dopasia in the Indochina subregion can be divided in two subgroups. The Dopasia gracilis subgroup contains D. gracilis and D. sokolovi, and is diagnosed by the presence of a dark ventrolateral stripe and three scales between nasal and frontonasal. The Dopasia harti subgroup comprises D. harti, D. hainanensis, and D. ludovici, and is diagnosed by the absence of the dark ventrolateral stripe and two scales between the nasal and frontonasal. It may be noted that some characteristics distinguishing the Southeast Asian Dopasia can also be observed among the species of the relatively closely related genus Anguis: males are often heavily blue-spotted in A. colchica and A. graeca and much less so in A. fragilis, while A. cephallonica convergently shows the same serrated borderline between dorsal and flank coloration (see Gvozdik et al. 2010) as also exhibited in juvenile D. harti and juvenile and adult D. ludovici.