[PaleoMammalogy • 2013] The Most Basal Beaked Whale Ninoziphius platyrostris Muizon, 1983: Clues on the Evolutionary History of the Family Ziphiidae (Cetacea: Odontoceti)


Abstract
Ninoziphius platyrostris, from the late Neogene of Peru, is one of the best-known fossil beaked whales (Odontoceti: Ziphiidae), with a holotype including the skull with ear bones, mandibles, teeth, and postcranial elements. Furthermore, based on several characters, including a complete functional upper and lower dentition, it is usually considered as one of the most archaic ziphiids. However, the poorly preserved dorsal portion of the holotype skull has led to unresolved phylogenetic relationships. With the addition of two newly prepared skulls from the same Peruvian locality we redescribed N. platyrostris. In the light of recent ziphiid discoveries, an emended diagnosis of the species is proposed here. In our cladistic analysis Ninoziphius is the most basal stem ziphiid. Newly observed or reassessed morphological traits allow functional and ecological considerations. The morphology of the oral apparatus suggests that Ninoziphius was less specialized for suction feeding than most extant ziphiids. Tooth wear in the holotype may indicate benthic feeding. Although the vertebral column of Ninoziphius corresponds to less developed locomotor abilities for deep dives, its cranial morphology does not provide definitive arguments for an echolocation system less efficient than in deep diving extant ziphiids. Finally, the phylogenetic tree produced was used to detail the evolutionary history of several major ziphiid features (dental reduction, development of mandibular tusks, and increased body size). 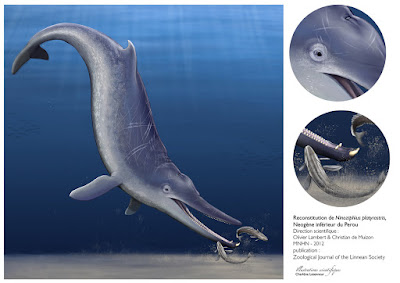