Anoectochilus Blume (1825: 411; Orchidaceae) belongs to subtribe Goodyerinae (Cranichideae; Orchidoideae; Pridgeon et al. 2003). The generic name is derived from the Greek words ‘anoiktos’ (open) and ‘cheilos’ (lip), referring to the flower with prominent lip giving an open appearance (Sumathi et al. 2003, Bhattacharjee 2013). The genus consists of about 30 species according to Genera orchidacearum (Pridgeon et al. 2003), distributed in India and the eastern Himalayas, through southern and southeastern Asia to Australia and the southeastern Pacific islands (Chen et al. 2009). There are 15 species of Anoectochilus in China, eight of which were reported from Yunnan previously (Chen et al. 2009, Chen & Shui 2010, Hu et al. 2012, Ormerod 2013).

Anoectochilus longilobus is similar to A. zhejiangensi and A. chapaensis, but differs from the former in having much bigger leaves and flowers and a straight spur with an acute angle between lip and from the later in having a cylindrical spur; it is distinguished from both by having longer, obliquely ligulate obcuneate, truncate epichile lobes. 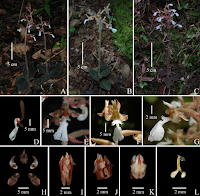