[Herpetology • 2016] Bothriechis nubestris • A Cryptic Palm-Pitviper Species (Squamata: Viperidae: Bothriechis) from the Costa Rican Highlands, with Notes on the Variation within B. nigroviridis

Middle America is one of the most biodiverse regions in the world, harboring an exceptional number of rare and endemic species. This is especially true of Middle American cloud forests, where montane specialists occupy restricted, high-elevation ranges making them attractive candidates for investigating historical biogeography and speciation. One such highland-restricted species, the black speckled palm-pitviper (Bothriechis nigroviridis), occupies the Central, Tilarán, and Talamanca Cordilleras in Costa Rica and Panama. In this study, we investigate the genetic and morphological variation among populations of B. nigroviridis by inferring a multilocus phylogeny (21 individuals) and analyzing meristic scale characters with a principal component analysis (64 individuals). We find B. nigroviridis sensu stricto to be composed of two deeply divergent lineages, one with a restricted range in the northern and central Cordillera Talamanca and the other ranging throughout the Central, Tilarán, and Talamanca Cordilleras. Furthermore, these two lineages are morphologically distinct, with previously unrecognized differences in several characters allowing us to name and diagnose a new species Bothriechis nubestris sp. nov. We also examine the genetic and morphological variation within B. nigroviridis and discuss biogeographic hypotheses that may have led to the diversification of Bothriechis lineages. 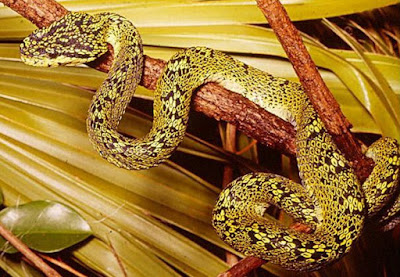 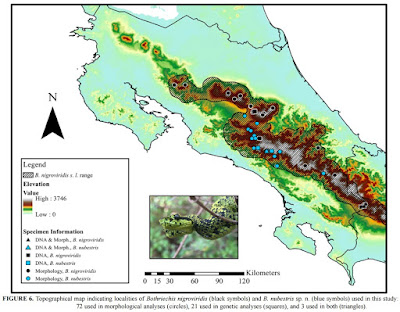 Diagnosis. (1) a medium-sized slender arboreal pitviper; (2) dorsum green with heavy black mottling; (3) iris blackish; (4) superciliary scales absent; (5) interrictals 22–29; (6) supraoculars thin, usually kidney-shaped; (7) intersupraoculars 6–10; (8) partial rows or two rows of irregular scales between suboculars and supralabials; (9) infralabials 9–12; (10) first dorsals usually 21 (75.9%); (11) second dorsals usually 21 (58.6%); (12) third dorsals usually 17 (85.7%); (13) ventrals 150–160; (14) subcaudals 52–64; (15) tail prehensile.
Specimens of Bothriechis nubestris differ from B. schlegelii and B. supraciliaris by lacking superciliary scales (present in B. schlegelii and B. supraciliaris). Bothriechis nubestris differs from all other Bothriechis species except B. nigroviridis by having green dorsal coloration with heavy black mottling and a blackish iris. Bothriechis nubestris differs from B. nigroviridis (see Table 1 for summary) by the combination of having 150–160 ventral scales (136–149 in B. nigroviridis), thin, often kidney-shaped supraoculars with a wide intersupraocular space (B. nigroviridis usually have wider supraoculars, never kidney-shaped, with narrow intersupraocular space, and higher average counts of interrictals, dorsals, and subcaudal scales than B. nigroviridis. 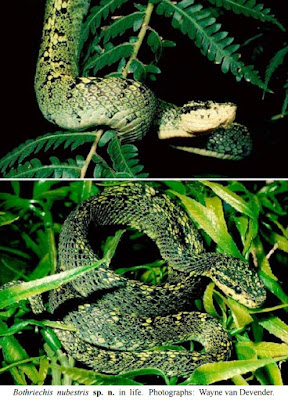 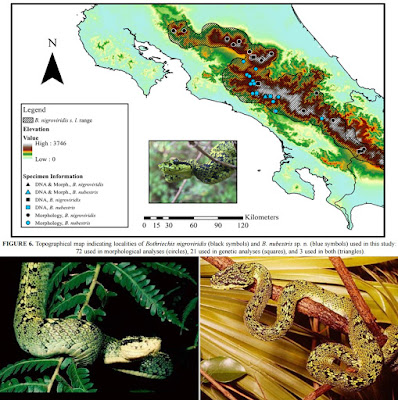 Distribution and natural history. Bothriechis nubestris is known from the northern and central portions of the Cordillera de Talamanca of Costa Rica in the provinces of San José, Cartago, and Limón (see Fig. 6). Three specimens (UCR 15422, 15428, 15429) have locality data that indicate they are from of the Cordillera Central, but they were snakes donated by locals to the Instituto Clodomiro Picado and it is possible that the locality data were recorded in error. We exclude these localities from consideration here, but acknowledge that if these localities are correct, the species also occurs in the Cordillera Central. The species has been recorded from 2400 m on Cerro de la Muerte to over 3000 m in San Gerardo de Dota. Bothriechis nubestris is an arboreal species usually found in the transition zone between cloud forest and montane rainforest.

Etymology. The specific epithet means ‘belonging to the clouds’. It is derived from the Latin noun nubes–, is, meaning cloud, and the Latin suffix –estris, meaning belonging to. This name alludes to the fact that this species inhabits cloud forests. The common name Talamancan Palm-Pitviper refers to its range in the Cordillera de Talamanca. 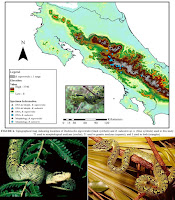