[Entomology • 2015] Revision of the Sundaland Species of the Genus Dysphaea Selys, 1853 (Odonata: Euphaeidae) using Molecular and Morphological methods, with Notes on Allied Species

Diagnosis. A narrow-winged Dysphaea species with male wings broadly opaque at basal half and at wing tips. Cerci with lower border nearly straight in lateral view.

Etymology. The species epithet is based on the common Thai girl name Vanida. In Thai the name means ‘girl’. The name is a noun in apposition and is not named after any particular person.

Diagnosis. A narrow winged Dysphaea species, males of which have only a small opaque patch at the wing base. Wing tips narrowly darkened. 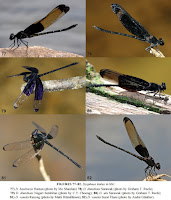