Abstract
A new genus Sundageophilus is here described for two new species of geophilid centipedes (Chilopoda: Geophilidae) from Sumatra, Indonesia. Both Sundageophilus bidentatus sp. n. and S. poriger sp. n. feature a minute body size (less than 1 cm long with 31–35 pairs of legs), a similar structure of the maxillae, elongated forcipules, and few coxal organs. Sundageophilus bidentatus is unique among geophilids because the ultimate article of the forcipule is armed with two conspicuous denticles, one dorsal to the other, instead of a single one or none. The two species of Sundageophilus are the first genuine Geophilidae ever found in Malesia, and among the very few representatives of this family in the entire south-eastern Asia.

Diagnosis: Relatively small geophilids, less than 1 cm long; cephalic plate distinctly elongate, without frontal line; clypeus with two pairs of setae on the anterior medial part, without a distinct clypeal area; intermediate part of labrum bearing stout tubercles, lateral parts far apart from each other and bearing bristles; first maxillae without lappets; second maxillary coxosternite with anterior margin entire and concave, without anterior projections, neither statuminia nor other distinctly sclerotized parts associated with the metameric pores; second maxillary pretarsus in shape of an elongate claw, more than 3.5 times as long as wide at the basis, sub-conic and slightly bent, with a small sub-basal dorsal bulge; forcipular tergite subtrapezoidal; forcipular coxosternite relatively elongate, the exposed part as wide as or only slightly wider than long, the anterior margin slightly projecting anteriorly, with two very short denticles and a narrow notch inbetween; coxopleural sutures complete, entirely ventral, straight and subparallel for most of their length; chitin-lines absent or hardly distinct; forcipules relatively elongate, the trochanteroprefemur is more than 1.4 times as long as wide, the tarsungulum more than 2.5 times as long as wide; forcipular intermediate articles distinct, without denticles; tarsungulum with at least a distinct basal denticle; trunk metasternites longer than wide, without obvious “carpophagus” pit; whenever present, a single sub-circular, posterior pore-field on all metasternites of the trunk; leg claws with at most a pair of accessory spines, shorter than mid-length of the pretarsus, similar to each other in length; ultimate leg-bearing segment with an entire pleuropretergite, without sulci; ultimate metasternite sub-trapezoid, the setae distributed almost uniformly in the female, unknown in the male; coxopleuron with at least two coxal organs, opening through independent pores on the ventral side; telopodite of the ultimate leg pair approximately 1.8–2.0 times as long as that of the penultimate pair; anal pores distinct.

Etymology: From “Sunda”, the name in use for the south-eastern part of the continental shelf of Asia, including Sumatra and other islands, and “Geophilus”, which is used in many other names of genera of geophilids.

Diagnosis: A Sundageophilus species with cephalic plate ca. 1.4–1.5 times as long as wide; first maxillary telopodite apparently composed of a single article; a distinct denticle on the distal part of the trochanteroprefemur; tarsungulum with two basal denticles, one dorsal to the other; 33 or 35 pairs of legs; no ventral pore-fields along the trunk; ultimate metasternite 1.7–1.8 times as wide as long, anteriorly ca. 2.0 times as wide as posteriorly, lateral margins slightly convex; two coxal pores on each coxopleuron, along the lateral margin of the metasternite; telopodites of the ultimate pair conspicuously swollen in the female, unknown in the male, apparently composed of only five articles because of the indistinct articulation between trochanter and prefemur; some articles of the ultimate leg pair with disto-ventral bulges covered with denser, longer setae, and a tuft of tiny spines replacing the pretarsus.

Etymology: “bidentatus” means “with two teeth” and refers to the presence of two distinct basal denticles on each forcipular tarsungulum.

Diagnosis: A Sundageophilus species with cephalic plate ca. 1.3 times as long as wide; first maxillary telopodite composed of two articles; no distinct denticles on the trochanteroprefemur; tarsungulum with a single basal denticle; approximately 31 pairs of legs; ventral pore-fields from the first to the penultimate leg-bearing segment; ultimate metasternite ca. 1.5–1.6 times as wide as long, anteriorly ca. 2.6 times as wide as posteriorly, lateral margins almost straight; four coxal pores on each coxopleuron, of which two along the lateral margin of the metasternite; legs of the ultimate pair not swollen in the female, unknown in the male, composed of six articles including distinct trochanter and prefemur, without disto-ventral bulges and without additional dense ventral setae; pretarsus of the ultimate leg pair similar to the other leg claws.

Etymology: “poriger” means “bearing pores” and refers to the presence of glandular pore-fields on the ventral side of the trunk. 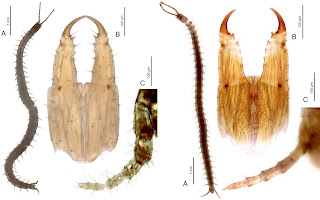