[Herpetology • 2016] Taxonomy and Natural History of Eutropis beddomei (Jerdon, 1870) (Reptilia: Scincidae), including a Redescription of the Holotype

Euprepes beddomei was described by Jerdon (1870) from “Mysore” (Karnataka State, India). Simultaneously, Euprepes (Tiliqua) septemlineatus, which is morphologically similar to E. beddomei, was described by Blanford (1870) based on a single specimen collected from the Ganga River Valley, Southeast Berar, Madhya Pradesh, India. Smith (1935) synonymised the latter species (published in September, 1870) with Euprepes beddomei which in turn was published earlier (March, 1870). Jerdon’s publication should therefore be given priority. A comprehensive comparison between the holotypes of the above two species confirms that E. septemlineatus is a junior synonym of E. beddomei. Based on morphological characters, Eutropis beddomei is here clearly identified and can be considered a widespread species in India and Sri Lanka. The original description of E. beddomei is very short and lacks a description containing most of the important diagnostic characters; hence, we hereby provide a comprehensive description of the species based on the examination of its holotype. 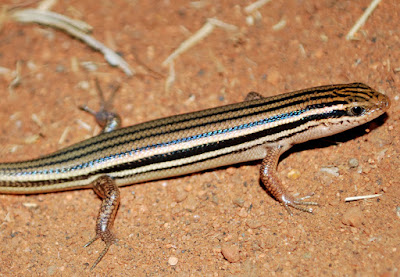