Abstract
Teleocichla preta nov. sp. inhabits the rapids along the Rio Xingu and lower portion of the Rio Iriri. It is the largest species in the genus, reaching 121·3 mm standard length (LS) while others do not reach more than 87·8 mm LS. Teleocichla preta is distinguished from all other species of Teleocichla by the unique blackish (in live specimens) or dark brown (preserved specimens) overall colouration of the body, which masks the faint vertical bars or zig-zag pattern of blotches on the flanks. Teleocichla preta also has a deeper body and a deep laterally compressed caudal peduncle, unlike any other congener, as well as a stout lower pharyngeal tooth plate bearing molariform teeth on its median area. 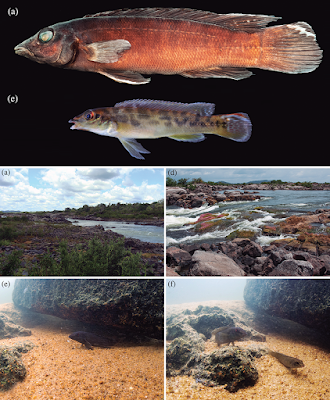 Habitat and natural history: In the region of Volta Grande do Xingu and the lower Rio Iriri, specimens of T. preta were collected in moderate to fast, shallow rapids [Fig. 5(a)–(d)], with clear water and the riverbed composed mainly of large rocks and little accumulated sediment [Fig. 5(e), (f)]. During underwater exploration by snorkelling, individuals of T. preta were observed performing short excursions out of their rocky hideouts, moving alone amidst small rocks and in crevices of large rocks (J. Zuanon. and H. R. Varella, pers. obs).

Etymology: The specific epithet preta, an adjective of the Portuguese language that means black, refers to the diagnostic dark overall colouration of the body and to the previous denominations for the species in the scientific and aquarium literature, as well as among fishermen of the Rio Xingu. Noun in apposition.