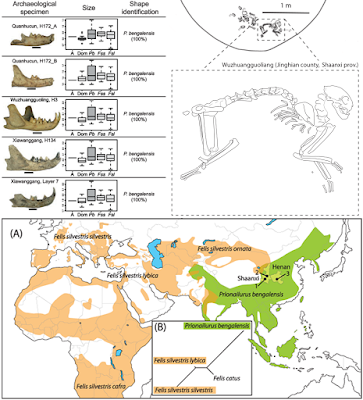 The ancestor of all modern domestic cats is the wildcat, Felis silvestris lybica, with archaeological evidence indicating it was domesticated as early as 10,000 years ago in South-West Asia. A recent study, however, claims that cat domestication also occurred in China some 5,000 years ago and involved the same wildcat ancestor (F. silvestris). The application of geometric morphometric analyses to ancient small felid bones from China dating between 5,500 to 4,900 BP, instead reveal these and other remains to be that of the leopard cat (Prionailurus bengalensis). These data clearly indicate that the origins of a human-cat ‘domestic’ relationship in Neolithic China began independently from South-West Asia and involved a different wild felid species altogether. The leopard cat’s ‘domestic’ status, however, appears to have been short-lived—its apparent subsequent replacement shown by the fact that today all domestic cats in China are genetically related to F. silvestris.