A new species of the genus Impatiens is described from Hubei province, China. Although it shares some features with I. dicentra, such as single-flowered peduncles and a filamentous bristle terminating the upper of the lateral united petals, it possesses distinct traits such as shorter plant height, rhombic to sub-rhombic leaves, lateral sepals entire, and lower sepals navicular without a spur. We believe that this is a new addition to the speciose Impatiens genus, and propose the name Impatiens shennongensis Q. Wang & H.P. Deng. We also describe the new species in this paper in terms of SEM-based seed and pollen micromorphology.

Diagnosis: The new species is similar to Impatiens dicentra in having single-flowered peduncles and the upper of the lateral united petals being terminated by a filamentous bristle. However, the differentiating characteristics are that I. shennongensis has a shorter plant height (15–30 cm), with leaves rhombic to sub-rhombic in shape, lateral sepals entire, and navicular lower sepals without a spur. In contrast, I. dicentra is taller (60–90 cm), with ovate or ovate-lanceolate shaped leaves, lateral sepals margins coarsely dentate, lower sepals saccate and constricted into an incurved spur.

Etymology:— The epithet shennongensis refers to the type locality, Shennongjia Forest Region, which is rich in plant diversity (Zhao 2002).

Phenology:— Flowering and fruiting from July to October.

Ecology and Distribution:— The new species occurs at margins of bamboo forests, about 2500 m in elevation. It is currently only known to exist in a small population in the Shennongjia Forest Region.

Phenetic relationships:— Impatiens shennongensis is similar to I. dicentra Franchet ex Hooker f. (1908: 268) in some traits such as single-flowered peduncles and the upper of the lateral united petals being terminated by a filamentous bristle. However, the former differs in the following characters: plant height (much shorter: 15–30 cm vs. 60–90 cm); leaf blades (rhombic or sub-rhombic vs. ovate or ovate-lanceolate); leaf margins (coarsely crenate, teeth 2-lobed, and mucronate between lobes vs. crenate-serrate, teeth mucronulate); margins of lateral sepals (entire vs. coarsely dentate); lower sepals (navicular, spur absent vs. saccate, constricted into an incurved, short, 2-lobed spur); flowers (1–1.5 cm long, white with fuchsia striate vs. flowers 4 cm long, yellow). 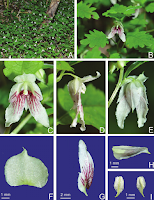