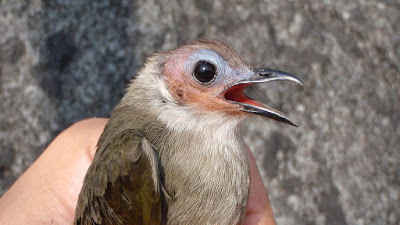 Based on distinctive morphological (plumage and skin) and vocal characters we describe a new species of bulbul from the limestone karst of central Lao PDR and place it in the genus Pycnonotus. The species is so far known from one locality in Savannakhet province and two probable earlier records from the Bolikhamxai–Khammouan provinces border area. Initial observations suggest it may represent an extreme example of habitat specificity within the Pycnonotidae and have a distribution limited to the central Indochina limestone belt of central Lao PDR and, perhaps, western central Vietnam. Further work is required to understand more clearly the distribution, ecology and behaviour of this species. However, its apparent preference for sparsely vegetated, deciduous habitats on rugged and uncultivable karst terrain may partly explain why this conspicuous species escaped detection for so long. Based on inferred distribution and apparent habitat preferences, a large proportion of the global population may occur within the Phou Hinpoun (Khammouan Limestone) and perhaps Hin Namno National Protected Areas. The relative impenetrability of the large, cohesive areas of karst present therein should further protect against the majority of processes that currently threaten Indochinese karst birds and their habitats. Populations on isolated outcrops are expected to be more at risk. 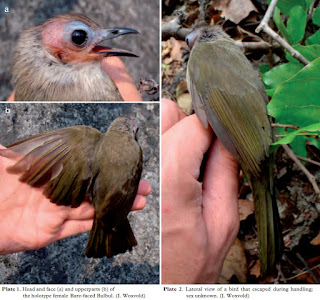 Diagnosis: Pycnonotus hualon is distinguished from all other bulbuls by the following individually diagnostic characters: the near-absence of contour feathering on the face and side of the head; the presence of extensive pale blue periorbital and loral skin and orange-pink skin on the rear sides of the head and below the eye to the malar area; the predominance of loose, hair-like filoplumes (mostly unbarbed) along the mid-crown; and the reduction of the anterior ear-coverts to a series of unbarbed bristles that cover the ear opening. It is further distinguished from other members of its genus by the combination of olive undertail-coverts, fawn-grey breast and belly, and offwhite throat.

Etymology: ‘Hualon’ is a Lao word meaning ‘bald-head[ed]’ (hua = head). It is a standard term used in reference to people with bald or shaven heads, which we use here as a noun in apposition to the genus name. We select this name as it is an immediate response, on being shown photographs of the species, to what is otherwise (to non-ornithologists) a relatively drab and anonymous bird. Coincidentally (see habitat description below), a massif lacking dense, tall vegetation on its upper parts is often known in Lao as a ‘phou hualon’.

REMARKS:
This paper describes for the first time in over 100 years a new Asian species of bulbul: Grey-eyed Bulbul Iole propinqua (Oustalet, 1903) being heretofore the most recently described. That P. hualon has escaped detection for so long is somewhat surprising given the bird’s distinctive appearance and call, conspicuous habits and occurrence in a well-populated region of lowland Laos. Its recent discovery can be at least partly explained by the species’s apparent association with sparsely vegetated, deciduous habitats on rugged karst terrain.

Despite high rates of speciation and endemism in karst habitats, flora and fauna communities on limestone are relatively poorly known throughout South-East Asia (Clements et al. 2006), a situation that holds particularly in Lao PDR (Rundel 1999). Indeed, several other unresolved bird taxa are already known from the central Indochinese limestone, including the ‘Limestone Leaf Warbler’ Phylloscopus sp. (Duckworth et al. 1998) and a potentially distinctive (or at least ecologically aberrant lowland) form of Green-backed Tit Parus monticolus (Timmins and Khounboline 1996). This scenario holds true for other taxa. Among mammals, for example, a number of morphologically distinctive leaf monkeys Trachypithecus have been described from similar habitat in recent decades (Groves 2001); the taxonomy of this group is still to be resolved (T. Nadler in litt. 2008).

Recently described small mammals include the phylogenetically distinct Kha-nyou Laonastes aenigmamus (Jenkins et al. 2004), the sole known living representative of a family of rodents believed extinct for some 11 million years (Diatomyidae) (Dawson et al. 2006). Taken together, these recent discoveries highlight the need for additional surveys in Lao PDR’s limestone karsts and, as exemplified by the recent discovery of Nonggang Babbler Stachyris nonggangensis in karst at the China–Vietnam border (Zhou and Jiang 2008), in similar habitats throughout the region.