Abstract
A new obligate cavernicolous (troglobitic) species in the planthopper family Kinnaridae is described from Brazil, and a new genus is established, as it could not be placed in any of the existing genera. Information on distribution and ecology is given. This is the second record of a troglobitic representative of this family from Brazil, and only the 6th cavernicolous kinnarid species worldwide. 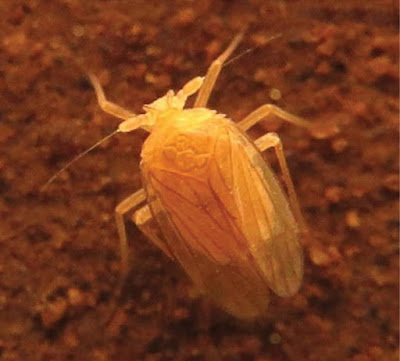 Etymology: The genus name refers to Iuiú, the name of the municipality were the cave (type locality) is situated. The gender is feminine.

Distribution: The species is only known from the “Lapa do Baixão” cave in Iuiú municipality, Bahia State, Brazil. The external vegetation in the area corresponds to the “Caatinga” formation, the only xeric biome of the country, with xeromorph, decidual vegetation (Fig. 2A).The cave has not been completely explored, since part of its inner chambers become flooded during rainy periods. However, the known passages extend over 500 meters. The only known entrance is a small opening (around 1m2 – Fig. 2B), which clearly imposes a huge stability to the cave atmosphere. During different surveys in the Iuiú municipality, another eight caves located near Lapa do Baixão cave were also sampled, but no specimen of Iuiuia caeca was found. This strongly suggests that the species is endemic to this cave. Furthermore, this cave was visited five times, and specimens we only found during two visits, which may suggest the low abundance of the species. However, during our last visit to the cave on 9.vii.2014, several adults and nymphs were observed, though they were restricted to a small part of the cave (see “Ecology”).

Geology: The “Lapa do Baixão” cave formed within limestones from the “Bambuí” geological group, from the Neoproterozoic, with ages ranging from 650-850 Myr. This group comprises the largest limestone formation in Brazil, embracing most of the known Brazilian limestone caves (Fig. 1). The other two troglobitic planthoppers described from Brazil are Kinnapotiguara troglobia (Hoch & Ferreira, 2013) (Kinnaridae), from limestone caves from the “Apodi” group (Rio Grande do Norte state), and Ferricixius davidi (Hoch and Ferreira 2012) (Cixiidae), known from a single iron ore cave in the “Iron quadrangle” formation (Minas Gerais state) (Fig. 1). The Apodi group comprises limestones from the Cretaceous (around 100 Myr), while the “Iron quadrangle” is much older (around 2.4 Byr).

Ecology: The Baixão cave possesses dozens of roots, mainly observed in the first portion of the cave (Fig. 2D). This part of the cave adjacent to the entrance comprises a labyrinth-like system of interconnected passages; then narrows into a single vadose and semi-meandrine passage. This deep vadose passage lacks roots, and no specimens of Iuiuia caeca were observed there.

Unfortunately, it was not possible to associate the roots to any particular plant species in the surface vegetation, but considering the distance between the surface and the cave, it appears likely that such roots belong to substantial trees with pivotant roots systems, capable of penetrating deep inside the cracks into the soil and rock until reaching the cave chambers.

Such roots shelter a variety of invertebrate species which feed especially in their decomposing parts. However, also many non-troglomorphic Cixiidae (Pintalia spp.) feed on them, especially in those roots located nearer the entrance (but also in aphotic zones). These are supposedly accidentals to the cave, but eventually can become troglophiles. Specimens of Iuiuia caeca were observed only on roots within the labyrinthic part in the deep cave zone.

They were only rarely observed on the same roots where the non-troglomorphic Cixiidae occur. The root mats where Iuiuia occur are mainly placed in the final portion of this labyrinthic part of the cave, near the connection with the inner single vadose and semi- meandrine passage. Such root mats are considerably smaller than those found in other parts of the cave. During a visit to the cave on 7.viii.2013, most of the observed specimens were nymphs, and only three adult males were found. During this visit, one of the males was found on a small root, near the cave floor, while the other two were found in an upper chamber, without roots, where they were freely walking on speleothems. During our last visit to the cave (9.vii.2014), seven adults and many nymphs were observed, but their spatial distribution was even more restricted. All observed specimens were associated with roots in a single part of the conduit, and no specimens were found in other chambers, as in the previous visit. Since both visits occurred in the dry period of the area, such differences observed on their abundance and distribution cannot be primarily related to seasonal changes. Potential predators include spiders (especially Ochyroceratidae), Amblypygi (Charinus iuiu Vasconcelos & Ferreira, 2016) and a relatively large troglobitic pseudoscorpion species, with a body size of around 5 mm (Spelaeobochica iuiu Ratton, Mahnert & Ferreira, 2012); the latter is well distributed throughout the cave, but less common in the areas where I. caeca occurs.

Etymology: The species epithet “caeca” (blind, Lat.) refers to the complete reduction of compound eyes in this species. The gender is feminine.

Remarks: In the cave, several 4th and 5th instar nymphs of Kinnaridae were collected which, due to substantial morphological differences, apparently represent two species. However, none of these nymphs could be associated with certainty to Iuiuia caeca. Thus it is likely that the cave Toca Lapa do Baixão houses at least two, if not three, kinnarid species.

The discovery of Iuiuia caeca not only represents the 3rd obligate cavernicolous Fulgoromorpha species in Brazil, but also provides evidence of three separate evolutionary lineages which have invaded caves, two within the Kinnaridae, and one within the Cixiidae. All three species were discovered within a few years and are the result of the exploration efforts of a single, but active team of speleologists. Given the vast extension of cavernous substrate in Brazil and the availability of suitable planthopper habitat, Brazil may soon join Hawaii (e.g., Fennah 1973a, Hoch and Howarth 1999, Wessel et al. 2013), Australia (e.g., Fennah 1973b, Hoch and Howarth 1989a, b, Hoch 1990, 1993) and the Canary Islands (e.g., Remane and Hoch 1988, Hoch and Asche 1993, Hoch et al. 2012) as another hotspot for cave planthopper diversity. It is to be hoped that legal measures for the conservation of the subterranean fauna of Brazil–which constitutes one of the country’s unique biological resources–will be developed and consequently reinforced. 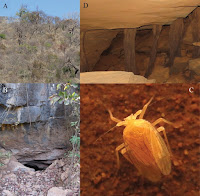