The Plain-backed Thrush Zoothera mollissima breeds in the Himalayas and mountains of central China. It was long considered conspecific with the Long-tailed Thrush Zoothera dixoni, until these were shown to be broadly sympatric.

In earlier field observations, we noted two very different song types of “Plain-backed” Thrush segregated by breeding habitat and elevation. Further integrative analyses congruently identify three groups: an alpine breeder in the Himalayas and Sichuan, China (“Alpine Thrush”); a forest breeder in the eastern Himalayas and northwest Yunnan (at least), China (“Himalayan Forest Thrush”); and a forest breeder in central Sichuan (“Sichuan Forest Thrush”). Alpine and Himalayan Forest Thrushes are broadly sympatric, but segregated by habitat and altitude, and the same is probably true also for Alpine and Sichuan Forest Thrushes. These three groups differ markedly in morphology and songs. In addition, DNA sequence data from three non-breeding specimens from Yunnan indicate that yet another lineage exists (“Yunnan Thrush”). However, we find no consistent morphological differences from Alpine Thrush, and its breeding range is unknown. Molecular phylogenetic analyses suggest that all four groups diverged at least a few million years ago, and identify Alpine Thrush and the putative “Yunnan Thrush” as sisters, and the two forest taxa as sisters. Cytochrome b divergences among the four Z. mollissima sensu lato (s.l.) clades are similar to those between any of them and Z. dixoni, and exceed that between the two congeneric outgroup species. We lectotypify the name Oreocincla rostrata Hodgson, 1845 with the Z. mollissima sensu stricto (s.s.) specimen long considered its type. No available name unambiguously pertains to the Himalayan Forest Thrush.

Etymology: We name this new species for Dr Sálim Ali, in honor of his huge contributions to the development of Indian ornithology and conservation.

Based on analyses of plumage, morphometrics, mitochondrial and nuclear DNA, song, breeding habitat and geographical distributions, we conclude that Zoothera mollissima s.l. should be split into at least three species, one of which is described here as a new species: Alpine Thrush Z. mollissima s.s., Himalayan Thrush Zoothera salimalii (sp. nov.) and Sichuan Forest Thrush Z. griseiceps, all monotypic. In addition, a distinct lineage, “Yunnan Thrush”, was identified genetically, but as we have no corroborating evidence that it is distinct from Alpine Thrush, we refrain from describing it here. Z. dixoni should be retained as a distinct species. 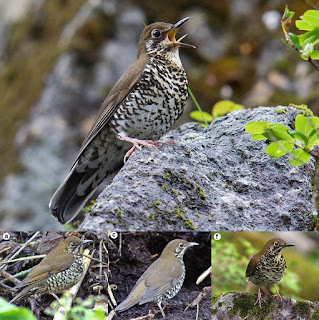