[Paleontology • 2016] Morphofunctional Analysis of the Quadrate of Spinosauridae (Dinosauria: Theropoda) and the Presence of Spinosaurus and a Second Spinosaurine Taxon in the Cenomanian of North Africa

Six quadrate bones, of which two almost certainly come from the Kem Kem beds (Cenomanian, Upper Cretaceous) of south-eastern Morocco, are determined to be from juvenile and adult individuals of Spinosaurinae based on phylogenetic, geometric morphometric, and phylogenetic morphometric analyses. Their morphology indicates two morphotypes evidencing the presence of two spinosaurine taxa ascribed to Spinosaurus aegyptiacus and ?Sigilmassasaurus brevicollis in the Cenomanian of North Africa, casting doubt on the accuracy of some recent skeletal reconstructions which may be based on elements from several distinct species. Morphofunctional analysis of the mandibular articulation of the quadrate has shown that the jaw mechanics was peculiar in Spinosauridae. In mature spinosaurids, the posterior parts of the two mandibular rami displaced laterally when the jaw was depressed due to a lateromedially oriented intercondylar sulcus of the quadrate. Such lateral movement of the mandibular ramus was possible due to a movable mandibular symphysis in spinosaurids, allowing the pharynx to be widened. Similar jaw mechanics also occur in some pterosaurs and living pelecanids which are both adapted to capture and swallow large prey items. Spinosauridae, which were engaged, at least partially, in a piscivorous lifestyle, were able to consume large fish and may have occasionally fed on other prey such as pterosaurs and juvenile dinosaurs.

Description: The six isolated quadrates from the Kem Kem beds of Morocco clearly belong to two morphotypes (Figs 2–4) based on the size and outline of the quadrate foramen, shape of the mandibular articulation, and outline, surface, and orientation of the quadratojugal contacts. Measurements taken on each quadrate (Fig 5A–5D) are provided in Table 1. 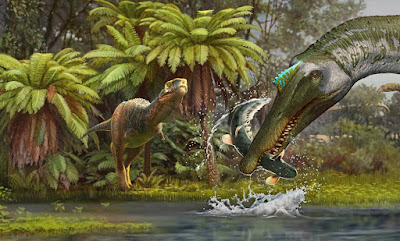 The description and identification of six isolated quadrates, among which two most probably come from the Kem Kem beds of Morocco, provide additional information on the Cenomanian dinosaur fauna of North Africa. Based on cladistic, geometric morphometric, and phylogenetic morphometric analyses, two morphotypes have been successfully identified as belonging to two species of Spinosaurinae, and ascribed to Spinosaurus aegyptiacus and ?Sigilmassasaurus brevicollis. This study provides the first convincing evidence of two spinosaurine taxa in the Cenomanian of North Africa based on cranial material, casting doubt on the recent reconstruction of a quadrupedal Spinosaurus which may be based on individuals belonging to two different species of Spinosaurinae.

Ontogenetic changes occurring in the spinosaurid quadrates include the suture of the quadrate and quadratojugal, delimitation of the mandibular condyles and squamosal capitulum, and development of a ventral projection of the dorsal quadratojugal contact and a second quadrate ridge ventral to the quadrate head. Based on the quadrate proportions and estimated skull length of Baryonyx and Spinosaurus, quadrates of mature individuals from Morocco belong to animals with a skull length of no more than 120 cm. This suggests that very large forms of Spinosaurus may have been rare in the Kem Kem assemblages.

Morphofunctional analysis of the spinosaurid quadrates has revealed peculiar jaw mechanics in these specialized theropods. An helicoidal and strongly lateromedially oriented joint of the jaw articulation allowed the lateral displacement of the mandibular ramus when the lower jaw was depressed. This lateral movement of the ramus was possible due to a movable mandibular symphysis as the dentaries were joined by connective tissues, and allowed the pharynx to be widened. A similar jaw articulation was convergently present in pterosaurs and particularly pelecanids which also have a mandibular symphysis restricted to the anterior extremity of the mandible. Spinosauridae, which are considered to be semi-aquatic and partially piscivorous animals, were able to swallow large prey such as fish in the same way as pelecanids. 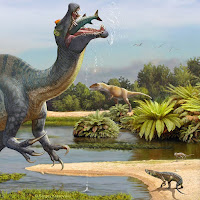 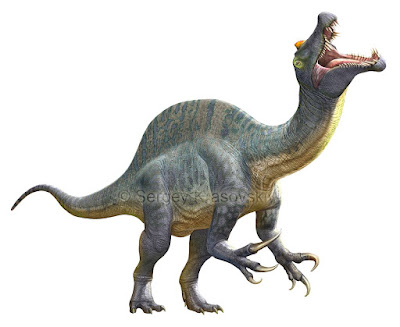 Christophe Hendrickx , Octávio Mateus and Eric Buffetaut. 2016. Morphofunctional Analysis of the Quadrate of Spinosauridae (Dinosauria: Theropoda) and the Presence of Spinosaurus and a Second Spinosaurine Taxon in the Cenomanian of North Africa.
PLoS ONE. 11(1): e0144695.  DOI: 10.1371/journal.pone.0144695