We describe a new species of the gekkonid genus Cyrtodactylus from Khammouane Province, central Laos based on morphological and molecular data. Morphologically, Cyrtodactylus rufford sp. nov. differs from its congeners by a unique combination of the following characters: medium size, SVL reaching 72.5 mm; dorsal pattern with three or four light transverse bands between limb insertions; one intersupranasal; 14–16 irregular dorsal tubercle rows at midbody, weakly developed in the paravertebral region; 27–29 ventral scale rows between ventrolateral folds; 42–43 precloacal and femoral pores in a continuous row in males, enlarged femoral and precloacal scales present; 4 or 5 postcloacal tubercles on each side; dorsal tubercles present at base of tail; medial subcaudal scales enlarged. Molecular analyses show that the new species is closely related to C. khammouanensis, which was originally described from Khammouane Province. 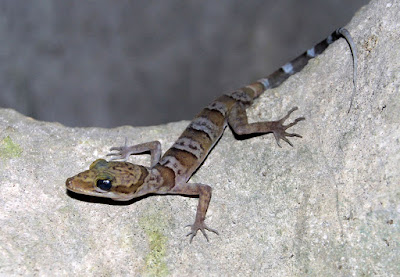 Etymology. The  new  species  is  named  in  honour  of  the  Rufford  Foundation  (UK)  for  its  support  to  herpetofaunal research and conservation in Laos. The species epithet is to be treated as a noun in apposition, invariable. As common names, we suggest Ki Chiem Rufford (Laotian) and Rufford Bent-toed Gecko (English).

Natural history. The type series of the new species was found between 20:00 and 21:00, on a karst cliff near the entrance of Nang Log Cave, from 0.3 m to 2 m height above the forest floor, at elevations between 160 and 180 m a.s.l. Nang Log Cave is situated within an isolated karst mountain surrounded by secondary forest, plantations, and some huts for tourists. The cave is a tourism site, only 50 m distant from Road 12 and 64 km from the border of Vietnam. The humidity was approximately 80% and the air temperature ranged from 24 to 26°C (Fig. 5). Other species found on the same karst wall within a 300 meters range of the type locality were the lizard Gekko gecko (Linnaeus), and the tree frog species Rhacophorus spelaeus Orlov, Gnophanxay, Phimminith & Phomphoumy, as well  as  the  Huntsman  Spider  Heteropoda  maxima  Jaeger,  and  the  long-legged  cave  centipede  Thereuopoda longicornis (Fabricius).