Phylogenetic analysis
Both ML and Bayesian phylogenies recovered similar topologies, with the ML tree providing better resolution at deeper nodes. Pedostibes tuberculosus was recovered as part of a primarily South Asian monophyletic clade, where it forms a sister lineage relationship to the clade that contains the genera Adenomus, Xanthophryne, and Duttaphrynus (Pedostibes + (Adenomus + (Xanthophryne + Duttaphrynus))). Males from this clade tend to be small in size with the exception of the genus Duttaphrynus. Southeast Asian ‘Pedostibes’ were reciprocally monophyletic with the genus Phrynoidis and represent a clade that exhibits the largest body size among all South and Southeast Asian toads (Fig 4; S2 Table). Uncorrected p-distances calculated from the mitochondrial alignment demonstrate that Southeast Asian ‘Pedostibes’ are 13–14% divergent from P. tuberculosus and 12–13% divergent from the genus Phrynoidis. These levels of divergences are consistent with other generic level divergences among South Asian, and Southeast Asian bufonids (Fig 5; S3 Table).

Systematics
Distribution, morphological, natural history, phylogenetic relationships and genetic divergences and genetic data do not support the current taxonomy that unites South Asian and Southeast Asian tree toads under the common genus Pedostibes. Because the Indian species P. tuberculosus has priority as the type species, we propose that the Southeast Asian lineages (‘P’. hosii, and ‘P’. rugosus) be recognized as a separate genus. One remaining, unresolved issue concerns the generic status of P. kempi and ‘P.’ everetti. Pedostibes kempi has not been collected since its original description and no modern specimens or genetic samples are available for study. ‘Pedostibes’ everetti is phenotypically similar to ‘P’. rugosus and the only discrete morphological character differentiating ‘P’. everetti from ‘P’ rugosus is the absence (vs. presence) of a tarsal ridge. Furthermore, ‘P’. everetti is only known from one juvenile specimen. Based on these limited data, the taxonomic status of these species remains uncertain and additional data will be required to resolve their taxonomic placement. Thus, based on distribution, we tentatively assign P. kempi to the genus Pedostibes and ‘P.’ everetti to the new genus named below, with the caveat that these relationships may need to be re-evaluated when additional data become available. Because the earliest species description of the Southeast Asian group is ‘P.’ hosii, and its only generic synonym, Nectophryne is occupied by a distinct African tree toad lineage, we define and diagnose a new genus for the Southeast Asian clade as follows:

Phylogenetic definition: Rentapia is a node-based name that refers to the clade originating from the most recent common ancestor of ‘Pedostibes’ (Rentapia) hosii and ‘P.’ rugosus (Fig 4). 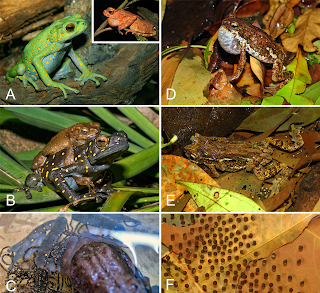 Content: The allopatric species of Pedostibes of Southeast Asia from the Isthmus of Kra, Thailand and Peninsular Malaysia, Sumatra, and Borneo: Rentapia hosii and R. rugosus. We also tentatively place ‘P.’ everetti in Rentapia because of its close geographic proximity with the two Southeast Asian taxa, as well as the character state similarities it shares with R. rugosus (webbed hands and feet, finger and toe tips dilated into truncate disks, movable coccyx, eight pre-sacral vertebrae, complete quadratojugal).

Etymology: The Iban are a subgroup of the indigenous peoples of Borneo (collectively known as the Dayaks) and form the main ethnic group in the Malaysian state of Sarawak. The generic epithet is selected to honor the legendary Iban warrior Libau Rentap, a great war chief, freedom fighter, and Malaysian national hero. Renowned for headhunting, the Iban were subjugated in Sarawak by the White Rajahs (English monarchy), who sought to confiscate land and impose taxes. Libau Rentap rose against the first of the White Rajahs, James Brooke, initiating a rebellion that eventually returned power to the people of Sarawak. The rule of the White Rajahs lasted from 1841 to 1946.

Discussion:
Pedostibes is small in size and deposits medium-sized clutches of eggs that are laid as films. The combination of these traits differentiates it from Rentapia gen. nov., which is diagnosed by its larger body size and an oviposition mode characterized by a large clutch of eggs laid as strings. Given that individual egg sizes in both genera are comparatively similar, this agrees with past studies that show a close correlation of clutch size to female body size. There are also differences in sexually dimorphic traits. Both male and female Pedostibes have the same color pattern, whereas Rentapia hosii females are vividly colored with bright markings, as compared to the duller, uniformly colored males (Fig 6A–6C). However, this color dimorphism has so far been observed only in R. hosii and we do not have evidence for either R. rugosus or R. everetti having such color dimorphism.

Since several recent studies have shown Pedostibes sensu lato to be a non-monophyletic genus within the family Bufonidae, suggested uniting Rentapia with its sister genus, the terrestrial river toad Phrynoidis, as a taxonomic solution. Although this suggestion would resolve the issue of monophyly, we find the recognition of the new genus to be a preferable solution based on several lines of reasoning. First, Rentapia and Phrynoidis exhibit striking morphological differences: Rentapia has expanded and flat finger discs (dilated into keratinized, bulbous tips in Phrynoidis); is considerably smaller in size (female Phrynoidis range from 120 mm to more than 200 mm SVL); lacks supernumerary palmar tubercles (present in Phrynoidis); possesses basal interphalangeal finger webbing (webbing absent in Phrynoidis); and the oral disk of Rentapia tadpoles is half the maximum width of the body (extends the entire width of the body in Phrynoidis). Striking ecological differences are equally apparent. Rentapia is an arboreal habitat specialist, whereas Phrynoidis are terrestrial riparian habitat generalists, that oviposits enormous clutches with an average size of 12,792 eggs per clutch; Finally, we note that genetic divergences of >12.0% (Fig 5) is consistent with other inter-generic divergences within Bufonidae, suggesting that our proposition is not discordant with other, accepted taxonomic arrangements. Although merging Rentapia and Phrynoidis would remedy the polyphyly of Pedostibes sensu lato, the preponderance of differences in morphology, reproductive characteristics, ecology, and molecular characters is best acknowledged by considering these two lineages as separate genera. 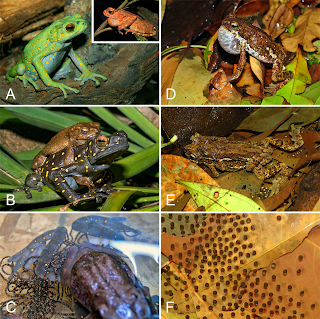