In 2011, three specimens from an unknown species of tube-nosed bat (genus Murina) were collected in montane moist forest at altitudes between 1117 and 1682 m in the Ngoc Linh Nature Reserve of Vietnam. We sequenced the mitochondrial COI gene from Ngoc Linh bats and performed comparisons with Murina sequences available in the nucleotide databases. The results suggested that the three unidentified specimens belong to Murina lorelieae, a species recently described from a single specimen collected in southern China. Nucleotide distances between specimens from Ngoc Linh and southern China are exceptionally low for M. lorelieae (1.25%) in comparison with three other Murina species, i.e., Murina cyclotis, Murina feae, and Murina huttoni (3.9–5.5%). We suggest that M. lorelieae is adapted to montane forests, which may have facilitated long-distance dispersal events between southern China and Vietnam during glacial periods of the Pleistocene. Morphological comparisons based on body-size measurements and geometric morphometric analyses of the skulls showed differences between Vietnamese specimens and the Chinese holotype of M. lorelieae. We proposed that the Vietnamese specimens belong to a distinct subspecies, Murina lorelieae ngoclinhensis. 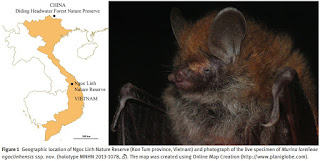