[Herpetology • 2014] Here be Dragons: A Phylogenetic and Biogeographical Study of the Smaug warreni species complex (Squamata: Cordylidae) in southern Africa

Taxonomy of the Smaug warreni species complex remains contentious despite known morphological differences and geographical separation of the various taxa. This study uses an 11-gene dataset to recover phylogenetic relationships between the seven nominal members of the S. warreni complex. Eight well-supported clades were returned, with S. warreni barbertonensis found to be paraphyletic. A time-calibrated analysis of molecular data indicates that all eight clades in the S. warreni complex separated in the late Miocene, much earlier than the date suggested by the existing hypothesis of vicariance through the ingression of Kalahari sands. Ecological niche modelling indicates that although all clades are allopatric, a slight decrease in temperature could potentially render them sympatric, supporting an hypothesis of range expansion through climatic change.

Discussion
Phylogenetic relationships and taxonomic implications
The eight major clades – representing seven currently recognized taxa and an un-named species currently assigned to S. w. barbertonensis – recovered by our analysis (Fig. 3) display high mitochondrial divergence (5.6–8.7%), possess non-identical ecological niches and exhibit diagnostic morphological characters. This confluence of diagnoses supports the working hypothesis that each represents an independently evolving metapopulation and can be treated as a valid species under the General Lineage Species Concept of de Queiroz (1998). No samples from the southern range of S. barbertonensis (see Bourquin, 2004; Bates et al., 2014) were included in this molecular analysis and further investigation is therefore required before we can establish whether S. barbertonensis from Swaziland and KwaZulu-Natal forms a monophyletic group or is rendered paraphyletic by S. warreni. However, as S. warreni barbertonensis is rendered paraphyletic by S. w. warreni and the populations of S. w. barbertonensis from Swaziland and KwaZulu-Natal are genetically and morphologically distinct from S. w. barbertonensis from the type locality (Barberton), these southern populations will be assigned to a new species (Bates & Stanley, in prep.). Furthermore, S. w. depressus and S. w. barbertonensis populations from Barberton northwards should be elevated to full species status to reflect the findings of this study and render S. warreni a monophyletic species. We therefore recognize the following species: Smaug warreni (Boulenger, 1908), Smaug breyeri (Van Dam, 1921), Smaug barbertonensis (Van Dam, 1921) comb. nov., Smaug depressus (FitzSimons, 1930) comb. nov., Smaug vandami (FitzSimons, 1930), Smaug mossambicus (FitzSimons, 1958) and Smaug regius (Broadley, 1962).

The three clades of S. breyeri returned by the analysis correspond to the southern (sites 1–3), western (sites 4 and 5) and north-eastern (site 6) sampling sites for this species (Fig. 2). Jacobsen (1989) recorded an isolated population of S. vandami from the Blouberg/Makgabeng mountains (vicinity of site 6, Fig. 2), and referred to specimens of both S. breyeri (museum voucher TM 58416) and S. vandami (TM 73979) from ‘farm New York’ in the eastern Waterberg mountains. He assigned species status to S. vandami on the basis of this apparent sympatry. A subadult S. breyeri (NMB R9134) collected 10 km south of Lephalale (site 1 in Fig. 2) – close to Jacobsen's record of sympatry – was similar in coloration to typical S. vandami (Fig. 1), and the Makgabeng individual (MBUR 00320) used in this study was initially identified as S. vandami by the collector based on colour pattern. The molecular analysis recovers both of the latter samples in the S. breyeri clade, and their identity was confirmed by subsequent morphological examination of voucher specimens. The two specimens (farm New York) on which Jacobsen (1989) based his comments regarding sympatry of ‘S. w. breyeri’ and S. vandami (the latter taxon elevated to a full species on the basis of his assessment) have also been examined and both are here considered referable to S. breyeri. Therefore, the above-mentioned Blouberg/Makgabeng and farm New York records, rather than representing isolated populations of S. vandami (see map in Bates et al., 2014), are associated with the known range of S. breyeri.

FitzSimons (1933) proposed that S. depressus from Entabeni (type locality) in the Soutpansberg range was a separate species, namely Zonurus laevigatus. Jacobsen (1989) suggested that this was a case of clinal phenotypic variation, with a gradual reduction in spinocity occurring from west to east. Individuals collected from the Z. laevigatus type locality of Entabeni were indeed less spinose in appearance than typical forms of S. depressus from 10 km north-east of Louis Trichardt (Fig. 7), and strongly resembled females of the two northern species S. mossambicus and S. regius. Spinose as well as relatively smooth-bodied specimens of S. depressus have also been recorded from east of Entabeni (Pienaar, Haacke & Jacobsen, 1983), but such specimens were not available for this study. A fairly deep divergence was seen within S. depressus, but both the typically spiny and smooth-scaled phenotypes were recovered on either side of the divide. Although there is genetic structure within this group, these clades do not correspond to a particular phenotype or distribution pattern. The consistency of this pattern across the separate mitochondrial and nuclear analyses suggests that this is not a result of introgression, and while it could conceivably be a result of incomplete lineage sorting, our limited sampling in this area was unable to reconcile this. Pending further work, we recommend that Z. laevigatus should remain in synonymy with S. depressus. All analyses recovered the specimen collected near the type locality of S. w. perkoensis within the S. vandami clade in the central part of the range. The three deeply divergent lineages of Smaug vandami may well represent independently evolving metapolulations (species). However, as our sampling is not comprehensive in this group, finer-scale phylogeographical analyses should be performed before any taxonomic re-assessment is attempted and Z. v. perkoensis should, for the moment, remain in the synonymy of S. vandami. 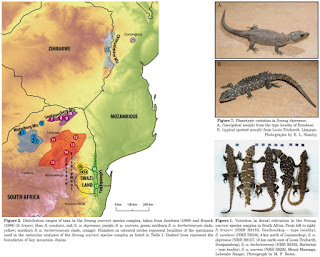