Abstract
Derived members of the enigmatic mammalian order Desmostylia have molars comprising appressed columns whose morphology does not render their function in feeding simple to discern. Here we describe a new genus and species, Ounalashkastylus tomidai, more derived than Cornwallius but less derived than Desmostylus and Vanderhoofius, which develop a hypertrophied medial eminence on the dentary ontogenetically. Tooth morphology, vaulted palate and the medial eminence, which can rise to the level of the occlusal surface of M2, suggest that derived desmostylids clenched their teeth strongly while employing suction during feeding, most likely on marine and coastal plants. 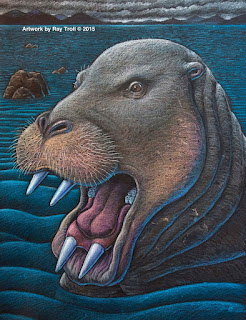 Etymology. Genus after the Aleut word Ounalashka, meaning ‘near the peninsula’, and from which Unalaska is derived; plus –stylus, Latin ‘column’, in reference to desmostylians. Specific name in honour of Dr. Yukimitsu Tomida, distinguished vertebrate paleontologist.

Diagnosis. Desmostylid differing from Ashoroa and more basal Desmostylia in having cylindrical, stylodont cuspsthat wear into rings of enamel surrounding exposed dentine;more derived than Cornwallius in having six or more cusps on lower molars; cheek teeth lower crowned (more primitive) than Desmostylus when compared at a similar minor stage of wear on homologous cusps and as shown by the curvature of the walls of the cylindrical cusps from the base of the crown toward the occlusal surface; less derived than Desmostylus and Vanderhoofius but similar to Cornwalliusin that erupted M3 does not lie in a trough developed by a medial eminence; M3 elongate compared to Desmostylus.

Type locality and age. Arriaga Quarry (now the site of a school), Unalaska, Unalaska Island, Alaska. Dutch Harbor Member, Unalaska Formation. The geological setting and age were discussed by Jacobs et al. (2007) who concluded that geological and biochronological limits (excluding the evolutionary stage of Ounalashkastylus) lay between 24.1 and 13 Ma, but that the locality most likely falls near the Oligocene-Miocene boundary (23.03 Ma), or slightly younger. 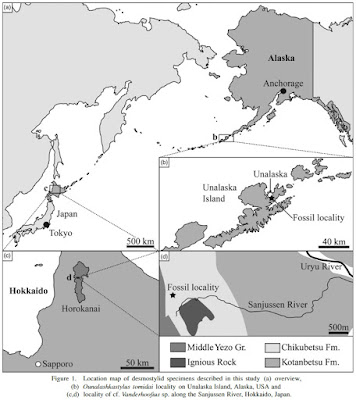 Oddball creature, Desmostylia, from waters where “Deadliest Catch” TV show is filmed, ate like a vacuum cleaner and is new genus and species of the only order of marine mammals ever to go extinct — surviving a mere 23 million years
http://blog.smu.edu/research/2015/10/05/new-fossils-intensify-mystery-of-short-lived-toothy-mammals-unique-to-ancient-north-pacific/  @SMUResearch 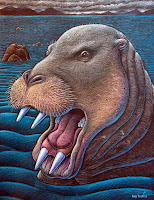 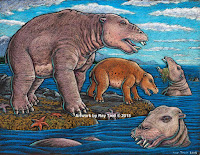