[Mammalogy • 2015] Aselliscus dongbacana • A New Species of the Genus Aselliscus (Chiroptera, Hipposideridae) from the Northeastern Vietnam

Trident bats found in mainland Southeast Asia are currently subsumed into a single species, Aselliscus stoliczkanus. In this study, we examined morphological and genetic data from different populations from Southeast Asia, with a special focus on specimens from Vietnam. Our analyses support the existence of a further species of Aselliscus in northeastern Vietnam that separated from A. stoliczkanus sensu lato (s.l.) during the late Miocene. Within the latter taxon, we identified five geographic lineages that diverged from each other during the Plio-Pleistocene epoch. Some of them may also correspond to further separate taxa, but additional molecular and morphological data are needed to test this hypothesis. Here with, based on the combined evidences we describe the northeastern Vietnamese population as a separate species.

Distribution: The species is currently known only from karst areas in Northeastern Vietnam (Fig. 1). 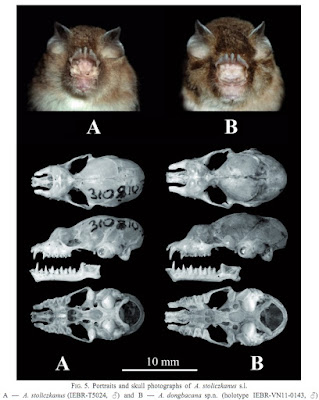 Ecology and habitat: Like other Aselliscus species, A. dongbacana sp.n. is also associated with karst areas, and use caves as roosts both in heavily degraded and intact lime-stone habitats. So far, nothing is known on the diet of A. dongbacana sp. n., but they might forage onsmall nocturnal insects in dense environments like A. stoliczkanus sensu stricto (s.s.) does (Li et al.,2007). However, the differences in skull size and especially in canine length suggest that their food sources may be different. Further studies on the diet of the two taxa is essential for a better understanding of whether food sources are important factors in their diversification. During our surveys, severa lpregnant females of A. dongbacana sp. n. were captured in May, while lactating females were found inJune. These observations confirm that March–July is the primary reproductive period for the new species and also for other insectivorous bats in North Vietnam (Furey et al., 2011).

Conservation status: To date, A. stoliczkanus s.l. has been classified as Least Concern in the IUCN Red List (Bates et al.,2008). However, A. dongbacana sp. n. is endemic to northeast Vietnam and little is known about the current population trends of the species. Unfortunately,like many other regional plants and animals, A. dongbacana sp. n. might be at risk due to various types of roost and habitat destruction, i.e. mining,timber harvesting or cave tourism (Day and Urich,2000; Clements et al., 2006; Furey et al., 2010). Further studies are needed to assess the impacts of habitat changes on A. dongbacana sp. n. to identifyhigh priority conservation areas to protect the species (Hutson et al., 2001; Furey et al., 2010; Kingston, 2010).

The speciation of Aselliscusin mainland Southeast Asia: when and how?
Our molecular dating based on Cytb sequences indicates that the separation between A. dongbacana sp. n. and A. stoliczkanus s.s. took place during thelate Miocene (ca. 7.2 Mya), much earlier than the diversification among subclades of A. stoliczkanus s.s. around the Plio-Pleistocene boundary (ca. 2.8–2.4 Mya — Fig. 2 and Appendix IV). The period of interspecific divergence seems therefore to coincide with the hypothetic climatic and associated vegetation changes in the region during the late Miocene. Indeed, at the beginning of the late Miocene (ca. 10–8 Mya or more recently), the extent and uplift of the Himalayan mountains and the Tibetan Plateau, linked to the development of the Northern Hemispheric ice sheets played an important role in driving the Asian aridification (An, 2000; An et al.,2001; Zhang Y. G. et al., 2009). As a consequence,the cool, dry climate caused the vegetation to change from mixed coniferous and broad-leaved forests to grasslands in Asia, and rainforests of the region were thought to be compressed into different refugia (Morley, 2000; An et al., 2001). At the end of the late Miocene and until the early Pliocene epochs, Southeast Asia was a single block of rainforest, as a consequence of the warm and humid climatic conditions. However, the uplift of Himalaya-Tibetan plateau about 3.6–2.6 Mya and the onset of extensive glaciations on the Northern Hemisphere during the late Pliocene and Pleistocene epochs, led to the development of more open vegetation types and the contraction of the rainforest into several isolated refugia (Morley, 2000; An et al., 2001; Meijaard and Groves, 2006). With this in mind, the current distribution of Aselliscus spp. in Mainland Southeast Asia (Fig. 1) suggests that their separation probably occurred in different glacial refugia across the region during two major phases of aridification in Asia since the late Miocene. Aselliscus bats are very small (body mass ca. 5 g), fly at low speeds and are usually associated with karst areas and for-age in cluttered habitats (Li et al., 2007; Francis,2008). These morphological and ecological features indicate that they might have poor dispersal capacities and high natal philopatry that could prevent gene flow among different isolated populations and facilitate speciation events. Despite their long separation, these taxa were found to have similar morphology and echolocation call features; whereas previous studies indicated that different species of hipposiderid bats are usually recognizable by their call features (i.e., Kingston et al., 2001; Thong et al.,2012). However, given that Aselliscus spp. are associated with karst areas, we hypothesize that their ecological evolution might be under stabilizing selection imposed by the special environmental conditions of karst habitats (i.e., forests and caves) (Bickford et al., 2007) and consequently reduces morphological and acoustic variation between different taxa. 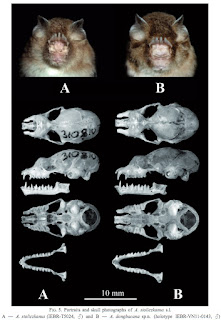