[Herpetology • 2016] Hyloscirtus diabolus • A New Red-eyed of Stream Treefrog of Hyloscirtus (Anura: Hylidae) from Peru, with comments on the Taxonomy of the Genus

We describe a remarkable new species of monophyletic genus Hyloscirtus from northeastern Peru. The presence of an enlarged, curved, and protruding prepollical spine; hypertrophied forelimbs; large, thick supracloacal flap and supratympanic fold; large size; nuptial pad absent and iris dark red diagnose this species. We hypothesize that the new species is closely related to H. condor and H. tapichalaca of southern Ecuador due to the apparently synapomorphic occurrence in these species of an enlarged, curved prepollical spine, and small, conical vomerine odontophore processes with 3–6 prominent teeth each without contact between these. Additional research explicitly incorporating H. diabolus new species in a phylogenetic analysis is required to further test our hypothesis and provide a better understanding of the evolution of morphological attributes described herein. Finally we discuss some aspects concerning the taxonomy of the genus Hyloscirtus. 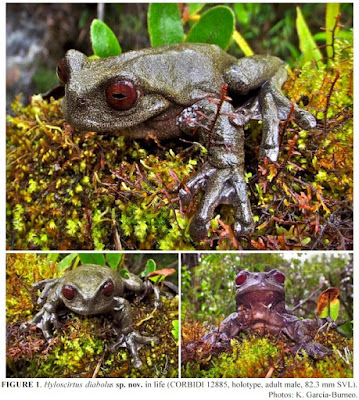 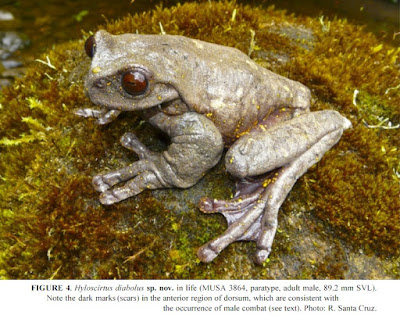 Etymology. The specific epithet diabolus is Latin for devil and is used as a noun in apposition. The devil according to Christianity is the spirit of evil and enemy of God, often represented as the ruler of hell and depicted as a human figure with horns, cloven hoofs, fire-red eyes, trident, and tail. The species name is in allusion to the hypertrophied forelimbs, enlarged prepollex with a projecting spine, trident vomers, and dark red iris in life.

Mauricio Rivera-Correa, Karla García-Burneo and Taran Grant. 2016. A New Red-eyed of Stream Treefrog of Hyloscirtus (Anura: Hylidae) from Peru, with comments on the Taxonomy of the Genus. Zootaxa. 4061(1);  DOI:  10.11646/zootaxa.4061.1.3
academia.edu/20047514/A_new_red-eyed_of_stream_treefrog_of_Hyloscirtus_Anura_Hylidae_from_Peru_with_comments_on_the_taxonomy_of_the_genus 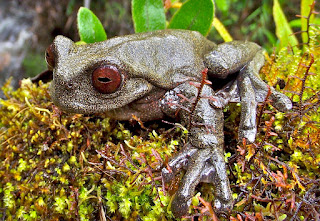