ABSTRACT
We provide a detailed description of a well-preserved enantiornithine specimen (GSGM-05-CM-004) from the Lower Cretaceous (Aptian) Xiagou Formation of northwestern Gansu Province, China, for which we erect the new taxon Feitianius paradisi, gen. et sp. nov. This specimen has a distinctive pelvic morphology and can be further distinguished from all other Mesozoic birds by a unique caudal plumage formed by multiple rectricial morphotypes. This newly documented tail morphology reveals a previously unrecognized level of complexity in the plumage of basal birds. This complex tail-feather morphology has a parallel in extant sexually dimorphic birds in which the males have the most altered tails; thus, we identify this specimen as male. Ornamental tail morphologies, such as the novel tail plumage described here, dominate Enantiornithes. This reinforces hypotheses that sexual selection was a major driving force in the evolution of basal bird plumage.

Holotype — GSGM-05-CM-004, an incomplete but articulated specimen preserving the caudal half of the skeleton (mostly inleft lateral view) on a single slab, including carbonized vestigesof the caudal body coverts, rectrices, and keratinous pedalungual sheaths.

Etymology — Feitianius  paradisi, meaning Paradise’s feitian (飞天), referring to the hundreds of paintings of feitian, or ‘flying apsara,’ in the Mogao caves that are not far from the type locality. Like the new species, the feitian were beautiful flying creatures. ‘Paradisi’ (Latin, genitive ‘from paradise’) refers to the similarity in tail morphology between the new fossil and the highly sexually dimorphic plumages of extant birds of paradise. For fun, we decided to masculinize the genus name because the holotype specimen appears to be a male.

Taxonomic Remarks — The specimen can be referred to Enantiornithes based on its possession of the following characters: excavated thoracic vertebrae with centrally located parapophyses; distinctive, large pygostyle with craniodorsal fork, ventrolateral processes, and distal constriction; ischium with strap-like proximodorsal process; and reduced metatarsal IV. Specimen GSGM-05-CM-004 can be differentiated from Qiliania graffini Ji et al., 2011, another enantiornithine from the same formation, by several features. First, Feitianius paradisi bears a medial plantar crest on metatarsal II (absent in Q. graffini).Although the proportions of the pubis and ischium are similar between the two taxa, the dorsal (caudal) margin of the pubis and ventral (cranial) margin of the ischium are concave in F. paradisi, whereas both of these surfaces are relatively straight in Q. graffini. Furthermore, the proportions of the pedal digits are quite different: the combined length of digit III compared with that of metatarsal III is 1.05 in the new species compared with0.92 in Q. graffini; the same ratio for digit II is 0.77 in F. paradisi and 0.70 in Q. graffini. In addition, in F. paradisi, the hallucal claw is comparatively more recurved and the penultimate phalanx of digit III is subequal in length to the proximal phalanx (the proximal phalanx is longest in Q. graffini). The pubis of the indeterminate Xiagou Formation enantiornithine GSGM-04-CM-007 is rod-like, and its distal end is curved 90 to the proximal shaft (Lamanna et al., 2006), whereas in Feitianius the pubis is dorsoventrally compressed and ends in a pubic boot. Unfortunately, there are no overlapping skeletal elements to comparewith Dunhuangia lii Wang et al., 2015, a newly described enantiornithine from Changma (Wang et al., 2015). Compared with other enantiornithines, the pygostyle is proportionally shorterthan in species of the Longipterygidae, the tarsometatarsus is considerably more gracile than in all species within the Bohaiornithidae or Avisauridae, and the metatarsal and digit I are shorter than in species of the Pengornithidae. Feitianius paradisiis most similar to Jehol ‘cathayornithiforms’ such as species of Cathayornis, Eoenantiornis, Protopteryx, and Sinornisbut differs from these taxa in the detailed anatomy of the pelvic girdle. 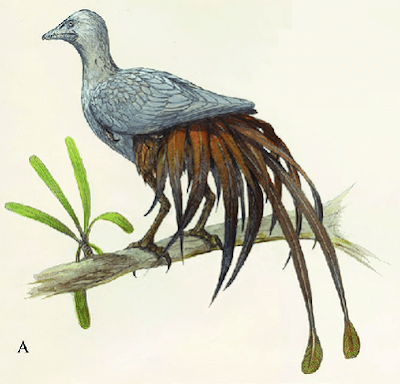 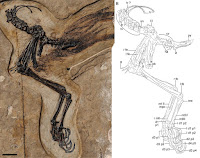 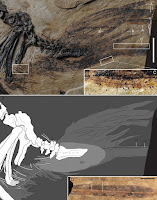