Abstract
A new species of the genus Tylototriton is described from eastern Himalaya based on molecular and morphological comparisons. The new species is diagnosable from the closely-related species by having light brown colouration in dorsal region in life, flat and blunt snout, greatly separated dorsolateral bony ridges on head and straightthick tailfin. In addition to head morphology, the new species is also morphologically distinguishable from its closely related species Tylototriton shanorum by having 16 dorsal warts and average smaller Snout Vent Length (SVL).

Etymology: The specific epithet is derived from the current distribution range of the species in the eastern Himalaya.

Distribution and natural history: Most specimens were collected from permanent and temporary ponds in the Illam District of Nepal (Figure 5). The habitats are characterized as the subtropical hill forest and area is dominated by scattered vegetation, for example, Schima wallichii, Castonopsis indica, Casttonopsis tribuloides, Albizzi sp., Sauraria nepalensis, Rubus ellipticus and Eupatorium adenophorum. Anders et al. (1998) reported the distribution of the new species in five places in the Illam District of Nepal with elevation ranging from 1 100 m to 2 120 m. They also checked the previous record by Shrestha (1988) in Dhankuta District but did not find the species. The distribution of new species is currently known only from the Illam District of Nepal and in Darjeeling District of India (details provided in Nag and Vasudevan 2014). The salamanders are more terrestrial in non-breeding seasons (from October to February) and found hiding under the logs, bushes and stones and come to the breeding ponds in early March or April soon after heavy monsoonal showers (also see Schleich and Kästle, 2002) . 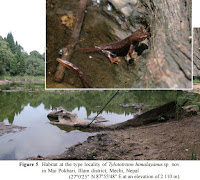