A new species of chameleon is described from the Livingstone and Udzungwa Mountains of Tanzania. The new species is morphologically most similar to Kinyongia vanheygeni. Furthermore, a single, short rostral appendage shows the species similarity to other Eastern Arc endemic Kinyongia species (e.g. K. uthmoelleri, K. oxyrhina, K. magomberae and K. tenuis). Females of all these species lack any rostral ornamentation and are all very similar morphologically. Males of the new species, on which the morphological diagnosis is based, can be distinguished from other Kinyongia by a shorter rostral appendage that bifurcates at the tip. They are easily distinguished from K. vanheygeni, otherwise the most similar species, by differences in head scalation and the length and shape of the rostral appendage. The new species is associated with montane rainforest and is known from only four forest fragments of which two are in the Udzungwa and two in the Livingstone Mountains. Phylogenetically, the new species is sister to K. tenuis and K. magomberae, which together, form a clade that also contains K. oxyrhina. The disjunct distribution of the new species, in the Livingstone and Udzungwa mountains, stretches across the ‘Makambako Gap’ which is a putative biogeographical barrier separating the distinct faunas of the Southern highlands and Eastern Arc Mountains. Evidence from this species however, points to potentially closer biological affinities between the Livingstone and Udzungwa mountains. 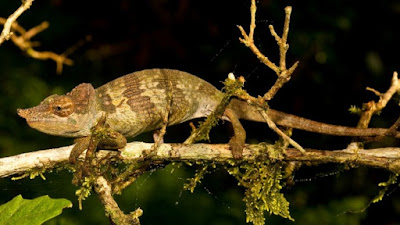 Etymology: The species is named after and dedicated to Charles A. Msuya, a pioneer of Tanzanian herpetology, who collected the first known specimen attributable to this species and has spent most of his life studying Tanzanian wildlife.