[Paleontology • 2016] Dracoraptor hanigani • The Oldest Jurassic Dinosaur: A Basal Neotheropod from the Hettangian of Great Britain

Approximately 40% of a skeleton including cranial and postcranial remains representing a new genus and species of basal neotheropod dinosaur is described. It was collected from fallen blocks from a sea cliff that exposes Late Triassic and Early Jurassic marine and quasi marine strata on the south Wales coast near the city of Cardiff. Matrix comparisons indicate that the specimen is from the lithological Jurassic part of the sequence, below the first occurrence of the index ammonite Psiloceras planorbis and above the last occurrence of the Rhaetian conodont Chirodella verecunda. Associated fauna of echinoderms and bivalves indicate that the specimen had drifted out to sea, presumably from the nearby Welsh Massif and associated islands (St David’s Archipelago). Its occurrence close to the base of the Blue Lias Formation (Lower Jurassic, Hettangian) makes it the oldest known Jurassic dinosaur and it represents the first dinosaur skeleton from the Jurassic of Wales. A cladistic analysis indicates basal neotheropodan affinities, but the specimen retains plesiomorphic characters which it shares with Tawa and Daemonosaurus.

Holotype: NMW 2015.5G.1–2015.5G.11 is a disarticulated, but associated partial skeleton with elements of the skull, including both premaxillae, both maxillae, some teeth, a lacrimal, partial jugal, post orbital, squamosal, fragmentary lower jaws and a possible hyoid, and postcranial skeleton including two cervical vertebrae, posterior elements of the vertebral column (lumbar and caudal vertebrae), distal forelimb, ischium and pubis, hind limb with femur, and fragmentary tibia with proximal fibula. There are also cervical ribs, thoracic ribs and several unidentified fragments (Table 1, Fig 5). 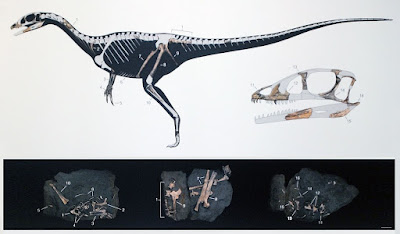 Etymology: The genus name Dracoraptor is from Draco alluding to the dragon of Wales with raptor, meaning robber, a commonly employed suffix for theropod dinosaurs. The species name honours Nick and Rob Hanigan who discovered the skeleton and generously donated it to Amgueddfa Cymru-National Museum of Wales.

Locality and horizon: The new specimen was collected from several limestone and mudstone blocks among debris from a small rock fall at the base of the cliff on the east side of Lavernock Point (National Grid reference ST 187681). The cliff at this locality is ~7 m high and exposes the top of the Late Triassic Penarth Group on the east side, and the Blue Lias Formation of the Lower Lias Group forming the point. Structurally this is the southwest dipping limb of the Lavernock syncline in the Bristol Channel Basin (Figs 2–4). The cliff fall in which Dracoraptor was discovered comprises material restricted to the lowest two to three metres of the section and comprises debris mainly from the Bull Cliff Member of the Blue Lias Formation (see above for detailed discussion of the age of these strata). Lithological and bed thickness comparisons indicate that the dinosaur comes from either bed 7 or bed 9 (Fig 4), of the Bull Cliff Member, both of which contain a thin, but distinctive bed of broken calcitic shelly material.

Dracoraptor hanigani is clearly a saurischian dinosaur on account of its pelvic construction, while the possession of serrated, recurved laterally compressed teeth among other characters demonstrates its theropod affinities. The cladistic analysis finds Dracoraptor to lie within Neotheropoda, but is basal within the clade. Dracoraptor can be distinguished from other basal neotheropods from the Late Triassic and Early Jurassic on a variety of criteria, not necessarily apomorphic. However, Dracoraptor possesses a combination of basal characters that make it difficult to place phylogenetically. The shallow antorbital fossa of the maxilla, an anteriorly located pleurocoel on the cervical vertebrae and the presence of an obturator notch in the ischium indicates neotheropodan affinities, but many of the other neotheropodan synapomorphies cannot be identified in Dracoraptor. The cladistic analysis recovers Dracoraptor as the sister taxon to “Syntarsus” kayentakatae and all other coelophysids placing it close to the base of Coelophysoidea (Fig 28). However, several of the synapomorphies of Coelophysoidea are coded ‘?’ for Dracoraptor. Notably the horizontal ridge of the maxilla parallel to the tooth row cannot be seen as both left and right maxillae expose their internal surface. The sublacrimal process of the jugal of Dracoraptor is certainly not pointed as it is in some non-coelophysoid theropods, but this process is slender, slightly damaged and it is ambiguous as to whether it is bluntly rounded which is typical for coelophysoids. Dracoraptor retains many basal features, and would appear to be very basal within Neotheropoda. It is likely that further preparation of the specimen will enable the identification of additional characters that may better resolve its phylogenetic affinities.

The presence of Dracoraptor in marine strata may be of little significance with regard to the animal’s autecology, but we have restored it as a shore-line dwelling animal (Fig 29). 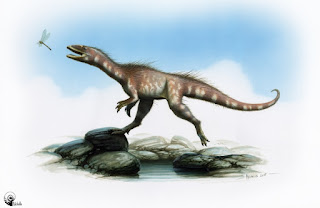 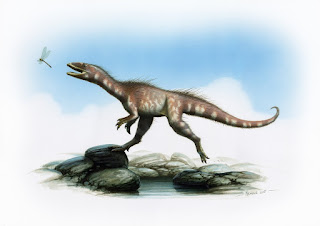 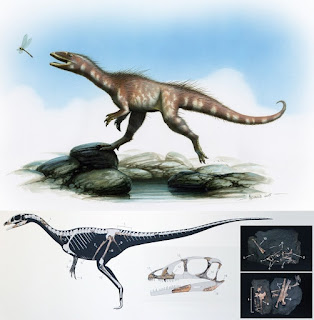