Highlights
• Machimosaurus rex is a new teleosaurid crocodylomorph from Tunisia.
• It is the largest known thalattosuchian, up to 10 m in length.
• M. rex, the first Cretaceous teleosauroid found, was the last-surviving of its group.

Abstract
A new teleosaurid from the Lower Cretaceous of Tataouine (Tunisia), Machimosaurus rex sp. nov., definitively falsifies that these crocodylomorphs faced extinction at the end of the Jurassic. Phylogenetic analysis supports its placement closer to M. hugii and M. mosae than M. buffetauti. With the skull length up to 160 cm and an estimated body length of 10 m, M. rex results the largest known thalattosuchian, and the largest known crocodylomorph at its time. This giant thallatosuchian probably was an ambush predator in the lagoonal environments that characterized the Tethyan margin of Africa during the earliest Cretaceous. Whether the Jurassic-Cretaceous mass extinction was real or artefact is debated. The discovery of M. rex supports that the end-Jurassic crisis affected primarily Laurasian biota and its purported magnitude is most likely biased by the incomplete Gondwanan fossil record. The faunal turnovers during the J-K transition are likely interpreted as local extinction events, triggered by regional ecological factors, and survival of widely-distributed and eurytypic forms by means of habitat tracking.

Etymology. The species name rex, Latin for “king”, refers to its majestic size among known Machimosaurus and all thalattosuchians.


Conclusion:
Machimosaurus rex sp. nov. is based on the articulated skeleton of a giant crocodylomorph from the Hauterivian of Tunisia. This taxon represents the first indisputable Cretaceous teleosauroid, and the first member of this clade from Africa based on well preserved remains. With a basicranial length approaching 160 cm (and a partial skeleton indicating a total body length around 10 m), M. rex is the largest known thalattosuchian. Both paleoecological data and morphological features suggest that this species was an ambush generalist predator with an ecology comparable to extant semi-aquatic crocodilians. The discovery of M. rex falsifies a global mass extinction event at the J-K transition (i.e., teleosauroid extinction), thereby highlighting the problem of sampling bias in the reconstruction of large-scale patterns in the geological record. The new Tunisian teleosaurid points to a conservative interpretation of faunal turnovers during the J-K transition: local extinction events triggered by regional ecological factors and survival of widely-distributed and eurytypic forms by means of habitat tracking. 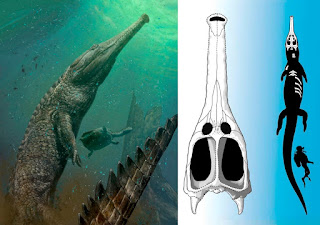