[Herpetology • 2016] Gloydius rickmersi • Alai! Alai! – A New Species of the Gloydius halys (Pallas, 1776) complex (Viperidae, Crotalinae), including a brief review of the complex

During a scientific field expedition to the Alai-Pamir range five specimens of the genus Gloydius have been collected in the larger Alai. A morphological and genetical examination of the specimens has shown that they are part of the G. halys complex, but represent a new taxon which is characterized by the following unique character combination: It is a slender and moderately stout small snake, up to 479 mm total length. The head has nine symmetrical plates on the upper head, 7 supralabial and 8-9 infralabial scales. Body scales in 20-22 rows around midbody, 143-156 ventral and 35-45 usually paired subcaudal scales. The cloacal plate not divided. The general coloration consists of various different tones of olive, tan and brown, having a distinct head, but an indistinct body pattern with, excluding the tail, 26-29 transverse crossbands, which are not extending to the sides of the body. The haplotype network shows the new species within the G. halys complex and close related to both, G. h. halys and G. h. caraganus. So far the new described species is only known from the Alai range. However, various Gloydius specimens are found in Kyrgyzstan and because of the complicated taxonomy those specimens have to re-identified to clarify their status and the status of the new species. 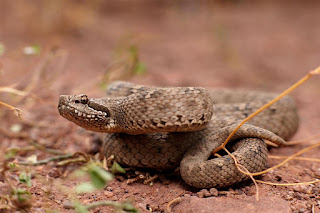