During the Middle and Late Jurassic, pliosaurid plesiosaurs evolved gigantic body size and a series of craniodental adaptations that have been linked to the occupation of an apex predator niche. Cretaceous pliosaurids (i.e. Brachaucheninae) depart from this morphology, being slightly smaller and lacking the macrophagous adaptations seen in earlier forms. However, the fossil record of Early Cretaceous pliosaurids is poor, concealing the evolution and ecological diversity of the group. Here, we report a new pliosaurid from the Late Hauterivian (Early Cretaceous) of Russia. Phylogenetic analyses using reduced consensus methods recover it as the basalmost brachauchenine. This pliosaurid is smaller than other derived pliosaurids, has tooth alveoli clustered in pairs and possesses trihedral teeth with complex serrated carinae. Maximum-likelihood ancestral state reconstruction suggests early brachauchenines retained trihedral teeth from their ancestors, but modified this feature in a unique way, convergent with macrophagous archosaurs or sphenacodontoids. Our findings indicate that Early Cretaceous marine reptile teeth with serrated carinae cannot be unequivocally assigned to metriorhynchoid crocodylomorphs. Furthermore, they extend the known diversity of dental adaptations seen in Sauropterygia, the longest lived clade of marine tetrapods.


Holotype, Horizon and Locality: YKM 68249/1-10, a slightly immature fragmentary skeleton consisting of a partial right premaxilla, the anterior part of the mandible, several teeth, three dorsal vertebrae in anatomical connection, a partial left ischium and a partial right ilium. It is preserved in three dimensions in a series of pyritic limestone nodules found along the banks of the Volga River, 600 m to the north of Slantsevy Rudnik, Ulyanovsk Oblast, Russian Federation (figure 1). The precise level within the section is unknown, but the section only contains Upper Hauterivian (Lower Cretaceous) strata of the Speetoniceras versicolor Zone in this locality.

Makhaira rossica shares morphological features with both Late Jurassic and Mid-Cretaceous pliosaurids, detailing the tempo of morphological evolution in the early history of Brachaucheninae. Osteological features often associated with macrophagy, and widely present in Middle–Late Jurassic pliosaurids such as the spatulate rostrum and the expanded caniniform teeth were seemingly lost early in the evolution of brachauchenines. However, the incompletely resolved phylogenetic position of Makhaira rossica within Brachaucheninae, and the presence of these features in some other Cretaceous pliosaurid specimens whose phylogenetic affinities were not resolved by our analysis raises a number of questions regarding the evolution and biodiversity of early members of that clade. Specifically, it seems that Early Cretaceous pliosaurids exhibit multiple ecomorphologies that are in need of further study. Because of the poor record of Early Cretaceous pliosaurids, it is still unclear whether trihedral, strongly carinated teeth constitute the ancestral condition of derived thalassophoneans or were acquired convergently in Makhaira rossica, Pliosaurus and currently enigmatic taxa such as ‘Pliosaurus’ rossicus. Parsimony-based methods are ambiguous while likelihood methods suggest that trihedral teeth are a synapomorphy of Pliosaurus + Brachaucheninae, that was subsequently lost within Brachaucheninae. In this scenario, Makhaira rossica thus retained the ancestral state of that trait, but modified it via a unique serration pattern.

Makhaira rossica departs from both Late Jurassic and Cretaceous thalassophoneans by its smaller size: the largest dorsal centrum is 72 mm wide. Nevertheless, fusion of neurocentral suture suggests osteological maturity for this specimen. For comparison, the last cervical centrum of the late Barremian ‘Brachauchenius’ sp. is 117 mm wide, the largest dorsal centrum of Brachauchenius lucasi is 90 mm wide and the width of those of Kronosaurus queenslandicus and ‘Kronosaurus’ boyacensis exceed 150 mm and 170 mm, respectively. Makhaira rossica markedly differs from Cretaceous thalassophoneans by having relatively large teeth and dental adaptations reminiscent of macrophagous predators such as theropod dinosaurs or thalattosuchians crocodyliforms. Unexpectedly, because of their densely serrated and wave-like pattern, the carinae of YKM 68249/1-10 appear larger and more complex than in other macrophagous marine tetrapods such as Mosasaurus hoffmani (V. Fischer 2015, personal observation on ULg PA.25119), Dakosaurus maximus ([54]; V. Fischer 2015, personal observation on ULg PA.6600) or Geosaurus, the latter being regarded as having ‘hypercarnivorous’ adaptations. Makhaira rossica is also unique among plesiosaurs in having trihedral but moderately widely spaced teeth. Contrary to carination and serration, previous authors have not generally assigned a specific functional interpretation to the presence of wide interalveolar spacing. However, we note that the carinated teeth of macrophagous marine reptiles are usually closely spaced.

Makhaira rossica thus indicates that pliosaurids explored previously unrecognized niches during the Early Cretaceous, with the presence of a smaller bodied taxon possessing clear yet distinctive macrophagous adaptations. By being the first sauropterygian to develop complex serration of its carinae, Makhaira rossica further exemplifies the profound diet-driven morphofunctional convergences that evolved among Mesozoic marine reptiles.

An isolated crown from the Aptian of Sicily (MSNC 4475) has been recently regarded as evidence for the late survival of geosaurine metriorhynchid crocodyliforms, several million years after their supposed extinction [61]. However, although they do not yet co-occur within a single pliosaurid taxon, all the features of MSNC 4475 described in [61] can now be shown to have been present among Cretaceous pliosaurids (‘The conical shape of the tooth crown, noticeable lingual curvature, presence of mesial and distal carinae, and microscopic denticles along the carinae’ [61], p. 610). We also note that MSNC 4475 appears weakly trihedral in apical view ([61]; figure 2f). Moreover, fine, smooth and widely spaced apicobasal ridges restricted to one surface of the tooth and the triangular or approximately triangular cross section of the crown are other features shared between MSNC 4475 and Makhaira rossica. Differences between these two specimens are also present: the apicobasal ridges are not located on the curved side in the large tooth of Makhaira rossica (but such ridges are present in one small replacement tooth (figure 3) and thus possibly variable with dental development in Makhaira rossica), and the weak development of a trihedral cross section in the Sicilian tooth. It is not currently possible to make a definitive statement on the affinities of MSNC 4475, which clearly is an important specimen and potentially illustrates the profound convergence of Makhaira rossica with macrophagous archosaurs. However, future discoveries are likely to clarify whether MSNC 4475 is a late-surviving, low-latitude metriorhynchid or a brachauchenine pliosaurid. 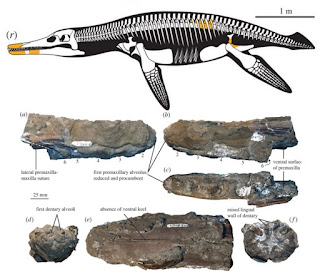