Abstract
Relationships between non-avian theropod dinosaurs and extant and fossil birds are a major focus of current paleobiological research. Despite extensive phylogenetic and morphological support, behavioural evidence is mostly ambiguous and does not usually fossilize. Thus, inferences that dinosaurs, especially theropods displayed behaviour analogous to modern birds are intriguing but speculative. Here we present extensive and geographically widespread physical evidence of substrate scraping behavior by large theropods considered as compelling evidence of “display arenas” or leks, and consistent with “nest scrape display” behaviour among many extant ground-nesting birds. Large scrapes, up to 2 m in diameter, occur abundantly at several Cretaceous sites in Colorado. They constitute a previously unknown category of large dinosaurian trace fossil, inferred to fill gaps in our understanding of early phases in the breeding cycle of theropods. The trace makers were probably lekking species that were seasonally active at large display arena sites. Such scrapes indicate stereotypical avian behaviour hitherto unknown among Cretaceous theropods, and most likely associated with terrirorial activity in the breeding season. The scrapes most probably occur near nesting colonies, as yet unknown or no longer preserved in the immediate study areas. Thus, they provide clues to paleoenvironments where such nesting sites occurred.

Systematics
Ostendichnus ichnogen nov. Fig. 3
Diagnosis: large, up to 2-meter-long, bilaterally-symmetrical, bilobed to oval impressions with multiple well-defined digital scratch marks aligned parallel or sub parallel to long axis of the whole trace. Up to 10–15% as deep as long. Traces mostly with a single raised central ridge, separating left and right troughs, which may include complete or partial diagnostic tridactyl theropod tracks.

Type horizon and locality: as for ichnogenus.

Description: large, bilaterally-symmetrical, bilobed to oval impressions or scrapes 0.75 to 2.00 m long and 0.50 to 1.25 m wide; depth variable, 5 to 25 cm. Multiple well-defined digital scratch marks align with the whole trace, as does a raised medial ridge defining the long axis of the trace. Some scratch marks have sharp anterior terminations, indistinguishable from typical theropod digit traces. Together with sand crescents, where sediment was pushed back by posterior motion of digits, or thrown posteriorly as a thin apron, the left and right sides of scrapes are defined. In some scrapes complete or partial theropod tracks are recognisable components of the scrapes.

Interpretation of Ostednichnus bilobatus
The sharply-terminated scratch marks found in association with diagnostic theropod tracks represent active theropod scraping or scratching. The most complete theropod tracks include a large Irenesauripus-like27,28 left theropod track on the left side of the holotype scrape (Fig. 3a) and a smaller right theropod track associated with the right side of a shallow paratype scrape (Fig. 3c). The variable size and depth of the scrapes, indicate different levels of activity and persistence by different sized theropods, which based on footprint length had hip heights between ~1.0 and ~2.0 m29 and full body lengths between ~2.5 and ~5.0 m. This implies either two or more different species, or co-occurrence of conspecific adults and sub-adults of quite different sizes. Elapsed time between scraping episodes cannot be estimated accurately, but was likely short given the similar, good preservation of all scrapes. 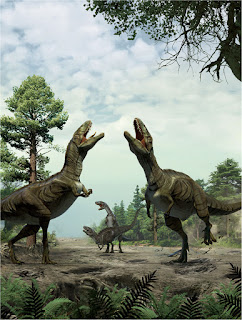 Interpretation of nest scrape displays
Interpretation of these scrapes as evidence of mating display arenas or courtship ritual sites requires elimination of other possible digging behaviour interpretations unrelated to mating display. We can then demonstrate whether or not the behaviour, and resultant trace fossils, are consistent with behaviours of other similar or related species, in this case extant birds. 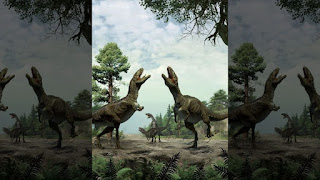