Abstract
Species boundaries of Microhyla rubra of India and Sri Lanka were assessed using the following criteria: genetic barcoding, morphology, and vocalization. We use a ca. 500 bp fragment of the 16S rRNA mitochondrial gene and show that there is an uncorrected pairwise distance of 2.7−3.2% between the Indian and Sri Lankan populations of M. rubra. We show that they are different in several call characteristics such as, dominant frequency, call duration, call rise time and pulse rate. Morphologically, the Sri Lankan population can be distinguished from the typical M. rubra described from southern India, by a combination of characters: body size, skin texture, and feet dimensions. We recognize the population from Sri Lanka as a new species, Microhyla mihintalei sp. nov., a widely distributed lowland species with an elevational distribution of up to 500 m a.s.l.

Etymology. The species is named after Mihintale, the point of unison for two ancient cultures when Mahinda Thero (Son of Indian Emperor, Asoka) met Dewanampiya Tissa (the king of Anuradhapura, Sri Lanka) in 246 BC. Mihintale is also considered to be one of the world’s earliest sanctuaries. The species epithet mihintalei is a noun in apposition to the generic name. 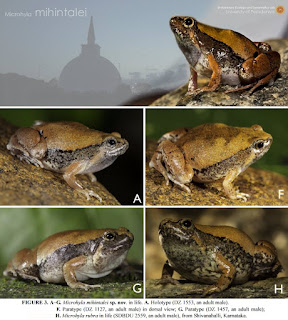 Distribution and Natural History. Microhyla mihintalei sp. nov. is found in the lowland dry zone (Fig. 4), mostly in shaded areas, often close to stream and river banks or regions that become fairly stable ephemeral pools during the rainy season. They were observed emerging from borrows in ground to call by around 7.30 PM, slightly after the initiation of calling of M. ornata, a smaller sympatric species. Compared to M. ornata, the abundance of M. mihintalei sp. nov.is much lower, and so are the corresponding numbers of tadpoles in pools. In captivity, M. mihintalei  was  observed  digging  rapidly  into  soil  using  their  hind  feet.  This  indicates  that  they  are  active  borrowers, and not only ground-burrow utilizers. They lay eggs as loosely arranged sheets on the water surface, mainly in ephemeral pools and their tadpoles also form loose shoals. The tadpole of M. mihintalei was described by Bowatte and Meegaskumbura (2011), however, as M. rubra from Sri Lanka.